When to use the different modes of National PE-201C flash?

I have a National PE-201C flash, which has the following guide chart: 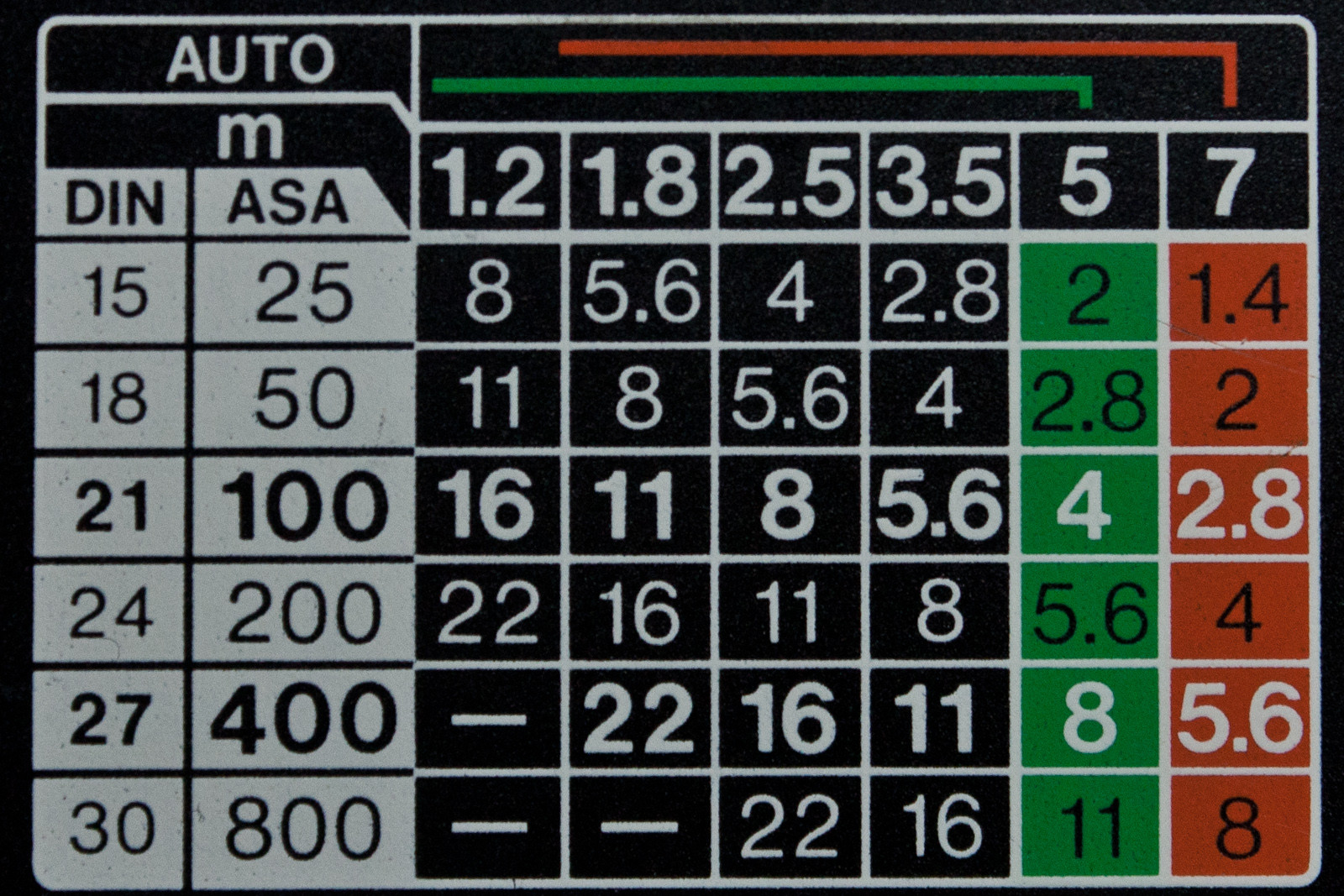 I kind of understand the chart: if I'm standing 3.5 meters away from the subject and have ISO 100 film, I should use an aperture of ƒ/5.6. However, I'm unsure when to use the different modes of the flash and how to they actually affect the exposure. It has two auto modes: green and orange and a mode labeled M (presumably manual).

Can the situations, when to use which, be interpreted from the chart above? I've noticed that in the chart the green auto's line start from 1.2 m and the orange's from 1.8; does it have a meaning or is it decoration? How the ƒ-number can be the same with the overlapping distances — how do the auto modes actually differ? When should I use the M mode and how powerful is that?

The flash being 20+ years old, I probably shouldn't rely on the auto-modes as the light meter might have had happily retired. But, in theory, when to use which?

Pentax AF280T is a flash from similar era with similar green and red auto modes. According to its manual, these are "low output" and "high output" automatic modes.

For medium distances, you may use either; for edge cases (closer than 1.8 m or further than 5m on the PE-201C), you have to tell the flash if you need the light thrown carefully or quickly (the distances covered by green and red line should hint that).

Manual mode very likely just pops at full power each time (easy to verify if you actually have the flash). Out of distance, aperture and ISO, select two as you like and use the chart to select third value to match.

Manual mode: the flash fires at its full power. You control the amount of exposure on your film by setting the f-stop on your camera. The chart helps you to determine the f-stop to use. The shutter speed is irrelevant to the flash exposure that the film will sense, but ambient (non-flash light) will still expose the film. So, for example, if you are outdoors, using ASA 800 film and a flash sync speed of 1/60 in order to fill-flash a person standing 20 feet from the flash, you will probably over expose the film even if you do set the flash correctly.

Auto mode: the flash has a crude, non-directional sensor on the front of it. This sensor must be unobstructed and pointing at the subject. It is handy, but not always accurate if you are finicky. This flash obviously has two flash intensities that it will use in auto mode. The higher intensity (green) will result in better flash-subject distances, smaller f-stop settings on the camera, and shorter flash durations which might be better for stop-action. It will also probably use up your batteries faster and age the capacitor more. The lower intensity will allow you to use the flash at closer distances or will give you a bit more flexibility in adjusting your fill-flash. Auto modes rely on you or your camera telling the flash what film speed you are using and what the aperture is set to. If you look around you will probably find a way to do that, a dial or a slide switch or something. Or it may rely on an extra pin to get that information from the camera, in which case it would be specific to a particular brand of camera. I have no idea if it is TTL flash capable.

Distance: the distances in this chart are flash-to-subject distances, not camera to subject. It is irrelevant how far your camera is from the subject. You are capturing the light that is reflected from your subject, so what matters is how much light is falling on your subject.

Chart: the full chart is used for manual mode, including the green and red columns. It's just a simple falloff chart. You can even extrapolate the chart out to the right or down to faster film speeds.

You're asking lots of questions here, so I'll just answer the main ones and you should be able to work out the rest.

There are two auto modes to essentially allow you some choice when it comes to aperture (for depth of field purposes). You'd use the orange Auto mode when you want shallower depth of field without too much fussing around with the flash settings, for example.

Manual mode is generally more accurate and allows for more artistic control, but takes a bit more setting up, much the same as with the camera itself.

Not the answer you're looking for? Browse other questions tagged flash manual-flash or ask your own question.

4
How can I use a Canon 580EX II in manual mode in conjunction with Bryan Peterson's book on flash photography?
5
How to use the safety shift custom function with a flash on a Canon 5D Mark II?
4
Why does the ISO change with the shooting mode when the aperture and shutter speed are constant and using a flash?
1
Why does using the flash mess up the white balance?
0
What's the relationship between flash modes and flash power on the Sony NEX cameras?
5
Why does exposure vary subtly between P, A and S modes, when the flash is on?
2
What is the difference between Flash Sync Speed and Flash Shutter Speed in Nikon menus?
1
Canon EOS film camera stopped working after trying to use flash
1
How to use the exposure guide table on the back of Vivitar 1900 flash?