Where should one go in terms of equipment for event shooting after a D7000 kit?

I'm still new at photography -- really, it is going to be a long while before I can get close to the potential out of the D7000 kit. However, Microsoft recently has been giving me the opportunity to go and photograph things like their Imagine Cup World Finals (which is, incidentally, where I am now).

I'm not really looking at spending lots of money on equipment at this point -- I just bought my first serious camera and it's going to be a long time before I will really be able to seriously use better lenses, or other niceties. However, as long as I get to go to these events, I'd like to be able to capture what I see there.

Consider this failed shot of Team Endeavor_Design from Romania, currently competing at the world finals: 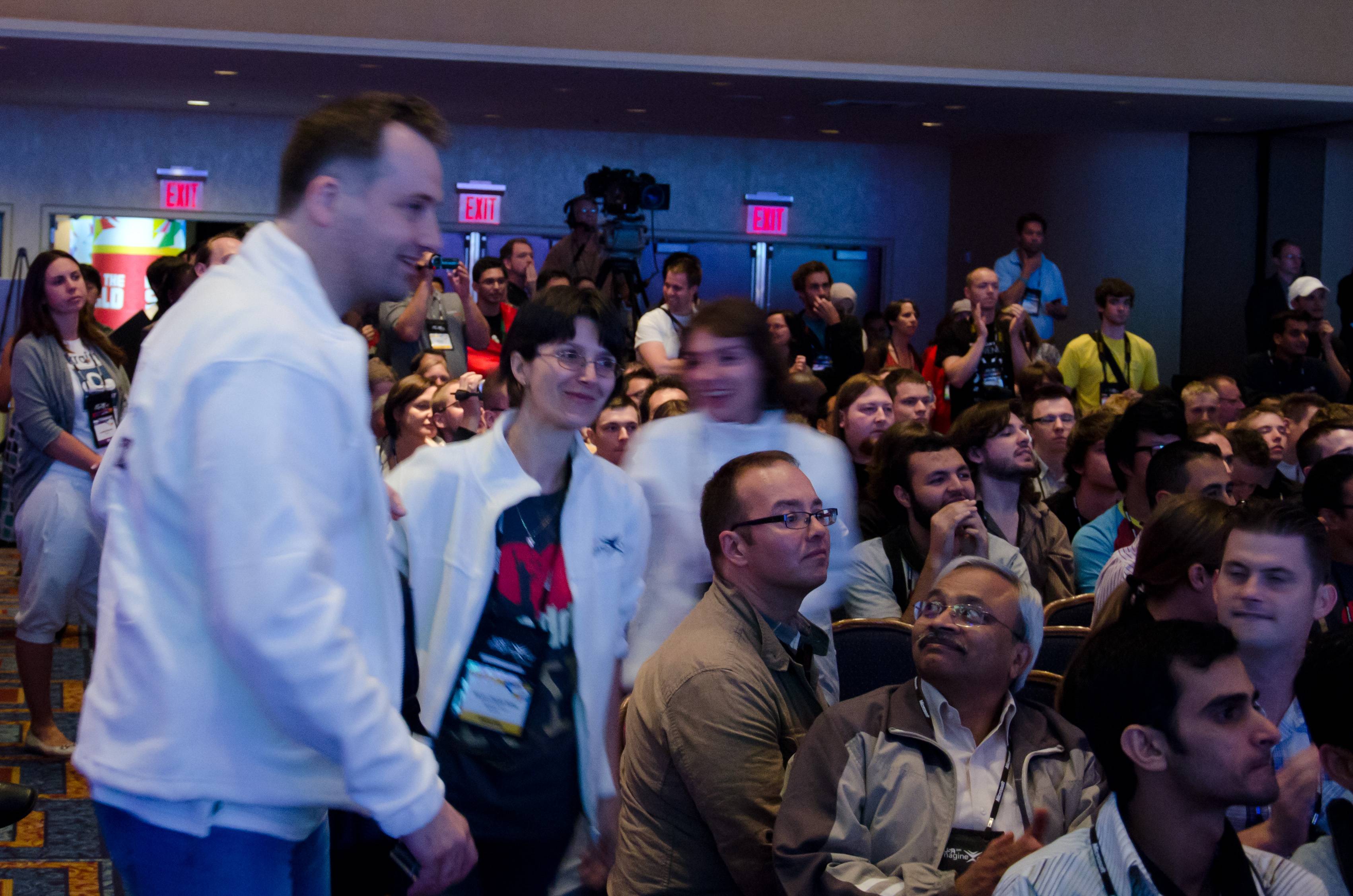 Note how the background is reasonably sharp (indicating correct handholding technique + VR in use).

This failed shot demonstrates the opposite effect -- the subject got tracked just fine but everything except for the one subject is a blur. (This image is also a composition failure but ignore that for the sake of discussion here) 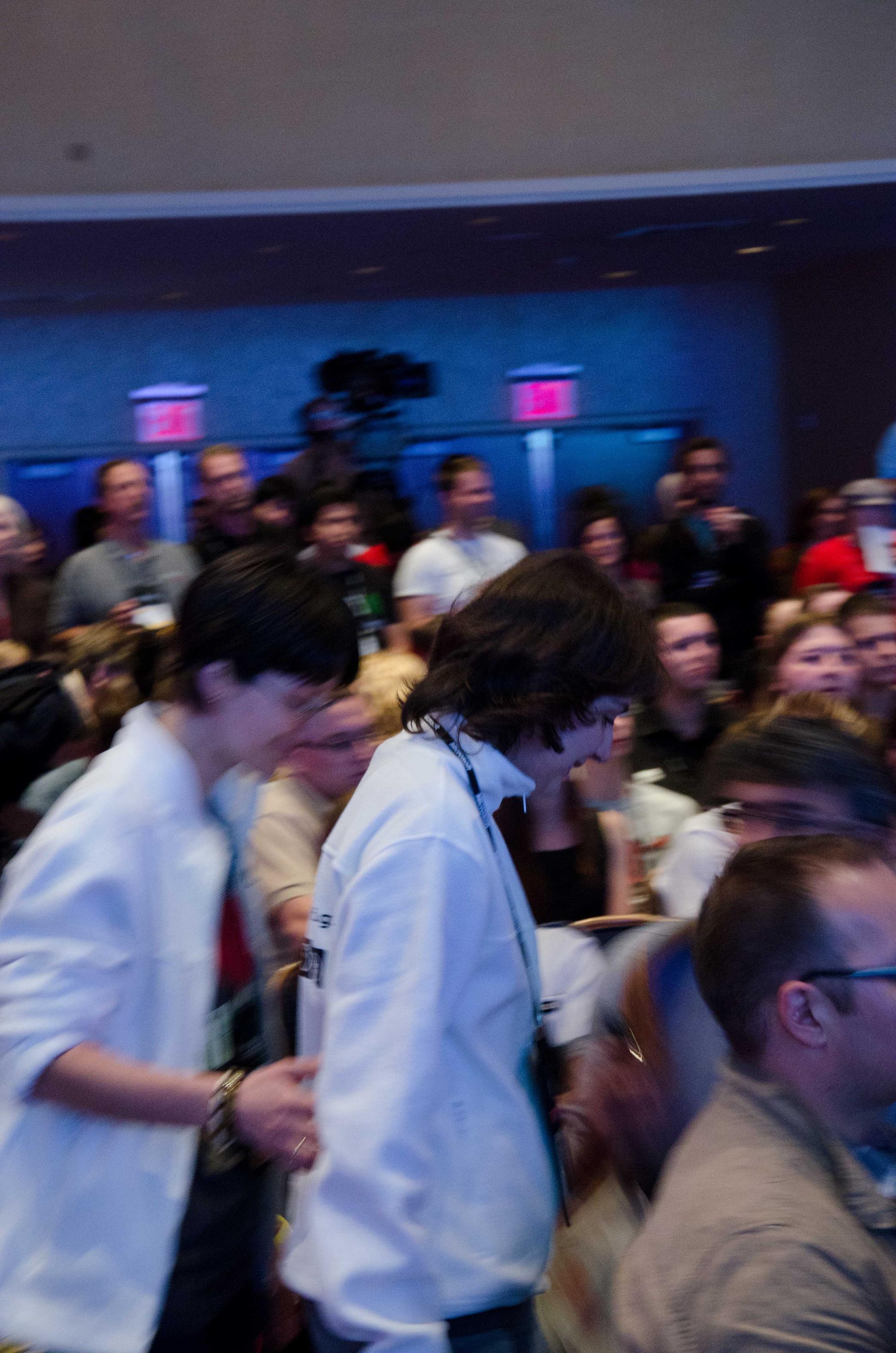 For both shots, the D7000 is about maxed out in terms of sensitivity at ISO3200. As it is I had to throw away a lot of sharpness in order to remove the noise at that sensitivity.

As I see it, the only way to save these shots (the first in particular) would be to somehow get more light into the game. A tripod won't solve my issue here, because as the first shot demonstrates, the camera is perfectly able to capture a sharp image while being handheld here. (And just as important, a tripod is unwieldy at an event) That leaves me two options:

I'm unsure what would be the best place to go from here though. The lens might be more versatile, because many venues won't allow use of a flash, and sometimes there's not a nearby ceiling or wall handy to bounce off for a reasonable shot. On the other hand, going with a faster lens takes away zoom ability. Moreover, a fast lens might get me two stops maximum over my current lens, while a flash would work in pitch darkness. As I've not shot a ton of events before though, I'm not sure which path is the better path.

What should I do?

You need a faster lens. D7000 is a good camera which is able to produce reasonably clean images even at ISO 1600. If you get a 35mm f/1.8, you'll be able to increase your shutter speed and thus get rid of the motion blur. Using flash could be an alternative to consider but a lot of events don't allow flashes to be used and also sometimes it annoys people, so I'd suggest a faster lens over a flash, if possible something with f/1.4.

Also, shoot a lot of pictures, so your chances of getting a technically and composition-wise sound picture is higher. Event photography is a sector which requires the most amount of pictures to be taken comparing to other sectors, so bear with it.

Go for the fast lens.

Contrarily to flash, this will make the entire photos brighter which is more pleasing than having every photo like it was shot in a dark cave and people looking like cut-outs because shadows are being them.

Event photographers also use flash but off-camera flash and they get permission to use them. Sometimes an assistant will follow holding the flash and positioning it. I do not think you will be willing to jump into that direction so soon.

The nice advantage of a short lens like the 35 is reduced effect of hand motion and it gives your shots a more expansive feel.

If you are allowed to use flash, use it only for fill - always try to pick up as much ambient light in your photos as possible within exposure limitations. You'll want a few warming filters for your flash, too.

Learn how to manage the AF in your camera. In my experience, getting the focus right in low light shooting wide open (e.g. 35/1.4) is tricky.

Whatever you do, avoid the gary fong diffuser crap. Waste of money. Take some white cardboard and fix it to the flash.

Not the answer you're looking for? Browse other questions tagged lens equipment-recommendation flash nikon-d7000 event or ask your own question.

3
Anyone got some good, simple introductory lens guides?
32
Is it worth to upgrade from Canon 50mm f/1.8 to Canon 50mm f/1.4 on 550d?
4
Can you help me justify my desire to purchase the Nikkor 24-70mm f/2.8 even though I find it rather pricey?
0
What advice do you have on choosing between Canon 60D and Nikon D7000?
2
What equipment should I purchase for a trip to Mongolia?
3
Why my "action" shots are blurry even shooting on AF-C, is this a lens or camera limitation?
0
Focusing issues with Nikon 18-35mm f3.5-4.5D on D3200
0
Which lenses should I have for covering a nightclub event.?