Why are blown highlights particularly bad in digital photography?

I've heard that digital sensors are less "forgiving" of blown highlights than film. Why is this?

There's something called "characteristic curves". How does this relate, in film and in digital?

Can anything be done about it? Is this a significant advantage for film in some situations, or does it just mean that one's shooting style might need to be a little different? (Or, does it even mean that?)

Digitally blown highlight is worse than negative film because transition between blown and light areas is quite harsh. Slide film is only slightly better than digital in rendering details in overblown highlights. You don't even need high magnification to see the digital image blowing promptly plain white, while the negative film gives more gradual fading of details and slide film is somewhere in between.

For example, here's wallpaper from my hallway shot with same exposure settings and same lens with digital and negative film. Film is shot at shorter distance to match field of view. Lighting is provided by off-camera flash in manual mode set on a lightstand just off the right side of frame. Lens hood is used to avoid stray light from flash. Flash power was doubled when shooting slide film to compensate for its lower sensitivity. 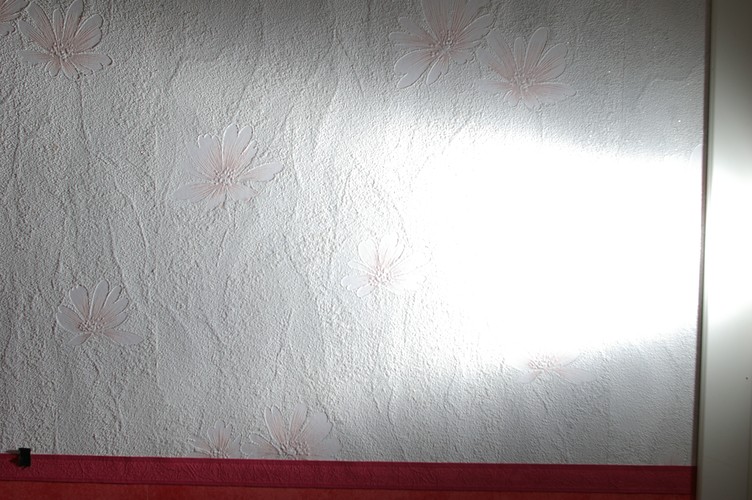 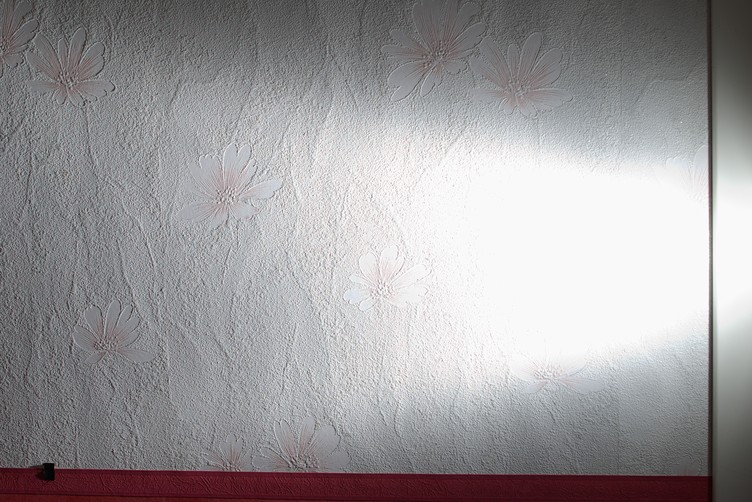 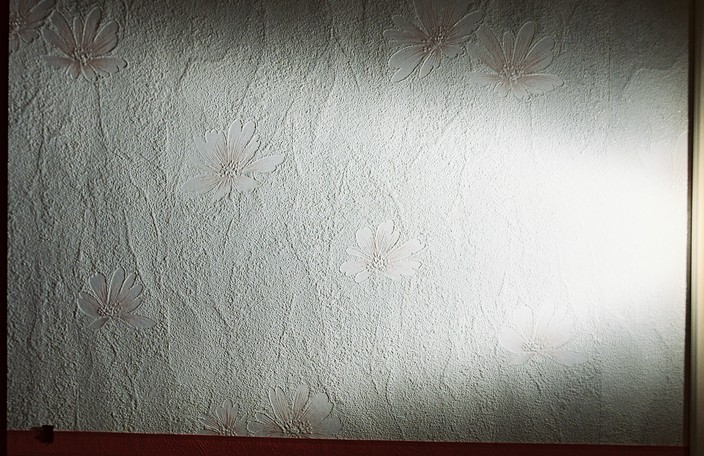 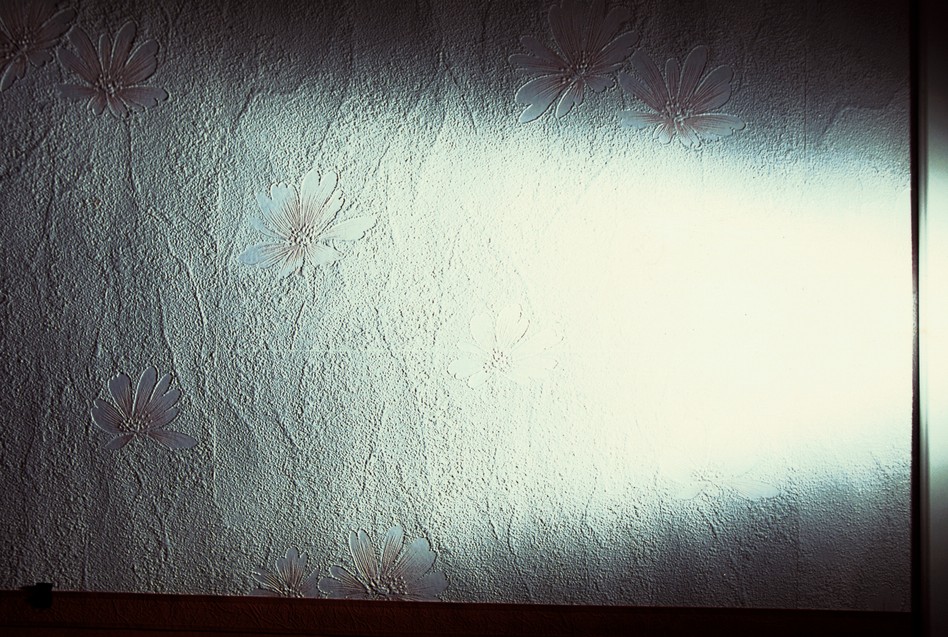 The white blotch on digital image catches attention and annoys, while the film image is much more like what could be seen with similar side-lighting. Shooting in RAW can help a little, but the white will still clip quite harshly.

Film has always had a more nonlinear response than digital, due to the different processes of exciting chemicals to change states, and collecting electrical charge on a solid state device. Another reason is that film contains grains of different sizes which respond differently to light, whereas most digital sensors are homogeneous.

What you ideally want is a gentle rolloff for highlights whereby it takes more and more incoming light to increase the recorded brightness as you approach blow out territory. This makes it substantially more difficult to reach that point and gives you some recourse to recover detail.

The only thing that can be done about this (other than erring on the side of underexposure) is to have two differently sensitive areas per pixel, giving a non-linear response. 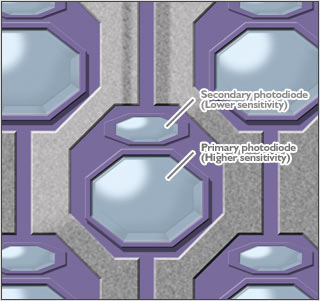 Fuji executed this concept with their SuperCCD range. Each pixel comprised a small and large photodiodes. When the big photodiode becomes saturated (thus "blown"), the small less sensitive one can carry on recording meaningful data which is used in place of the main photodiode. This gives you the more gradual rolloff you got with film. 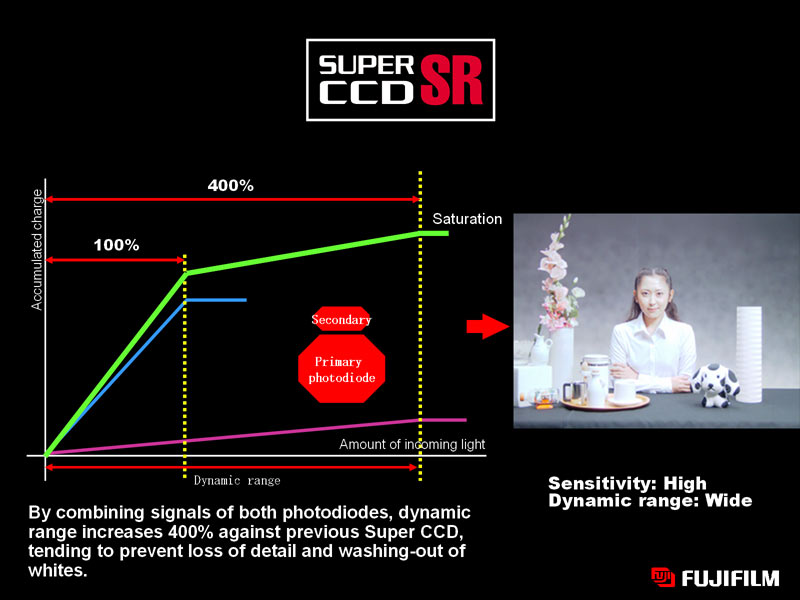 I don't know why this didn't catch on, as apparently the DSLR version was very popular with wedding photographers not wanting to blow out white dresses...

The reason for this is the same as digital audio clipping: when the input channel has reached its maximum, it simply cannot go any higher. Unlike analog film photography, where exposure limits are not "hard", digital photography uses numbers to represent the brightness and colors of each part of an image and these numbers can only go up to a hard maximum value (typically 255). Therefore, anything beyond this value cannot be correctly recorded, resulting in a loss of data in highlights. This generally cannot be recovered from because there is no further tonal data that can be extracted from such parts of an image.

From a technical standpoint, clipping in photography and audio are the same problem in two different applications - a numerical value having reached its limit.

(You asked for Digital Sensors, not particularly CMOS) For one, CCD sensors have the blooming effect, which does not happen on film (or CMOS).

Due to the design of CCD sensors, charge can leak from a saturated sensel to its neighbor in an adjacent line. This way, charge leaks from line to line (vertically) and the result is a vertical strip of bright pixels. The longer charge is accumulated, the longer are these strips. An example can be seen in the linked page.

Blowing out a single channel often occurs when shooting a frame with highly saturated reds or blues in it. That's because the exposure meter pays more attention to greens than the other colors. (our eyes are most sensitive to green light, and exposure meters are tuned to match our eyes.) Imagine shooting a bright red rose. The exposure meter pays more attention to the green channel when measuring exposure, and as a result, over-exposes the reds. The green and blue channels are not blown out, but in a red rose, all the details are in the reds, and if blow out the red channel, the rose looks like a big blob of red with no detail.

Thus it is a good idea to set your camera to show an RGB histogram, not just a single-channel histogram, and make sure none of the channels are clipping detail on the right (brightest exposure) side of the histogram. If your camera won't let you view an RGB histogram, just get in the habit of dialing back the exposure by 1/2 to 1 stop when shooting highly saturated reds or blues.

I recommend when capturing images to avoid blowing anything out, in fact not having any pure white or pure black is ideal because it will give you the maximum flexibility in post-processing where you can control what gets blown out and what gets reduced to pure black.

Can anything be done about it? Sure, watch the exposure and avoid over and under exposure.

Is film at an advantage? No, because it is much harder to "watch the exposure".

In general, when a highlight is 'blown', exposure information from that part of the film (or image area, if digitally shot) cannot be recovered.

When shooting film, which is an analog substrate, you could argue that it is practically impossible to accidentally blow your highlights no matter what the exposure there will always be some grains of film that have not reacted to light. Therefore, in principle, you could perform darkroom-fu to recover this signal.

With digital, this is not true, as a photosite's response can saturate. No amount of post-processing can recover this information.

Characteristic curve results from development. Latent image is linear, very much like raw, but the upper threshold for the latent image formation is very high, much higher than that of a consumer sensor. To match this film parameter, one may need to rate the camera ISO 3 to 5 stops lower. But even 1 stop results in a significant improvement.

29
When is it okay to have blown highlights and shadows?
26
What is ETTR (Expose To The Right)?
13
Is 14-bit RAW better than 12-bit RAW?
12
How does flexible ISO make shooting digital different from film?
8
Is over-exposure preferable than under-exposure?
10
How does RAW prevent "ugly digital clipping"?
3
How critical is it to expose raw images correctly?
4
Are modern digital cameras better at dealing with blown highlights than they used to be?
4
Why are my highlights purple?

45
What does it mean for a photograph to be "high key"?
29
When is it okay to have blown highlights and shadows?
6
Why are there no digital cameras with ultra-bright integrated lenses, like f1.0, f1.2 or even f1.4?
15
Why is my camera so forgiving for overblown exposure when shooting in RAW?
4
Are modern digital cameras better at dealing with blown highlights than they used to be?
67
Why are SLR mechanisms still prevalent among high-end digital cameras?
4
Why don't digital cameras have better dynamic ranges?
5
Why are blown-out highights pink instead of white in Darktable?
5
Are burned out highlights bad?