What are the basic workings of the Lytro light-field camera?

lytro.com describes their new light field camera as being able to capture the entire light field, rather than just one plane of light, thereby allowing for a whole new set of post-processing possibilities, including focus and perspective adjustment.

What sort of sensor could "capture every beam of light in every direction at every point in time"? How would an essentially infinite amount information be encoded and manipulated? Would there be a lens up front in any traditional sense?

Here is the inventor's dissertation: http://www.lytro.com/renng-thesis.pdf

Can somebody boil this down for those of us who are familiar with traditional technologies?

The easy way to think about this is as follows:

Imagine that instead of one camera, you had a grid of 100 cameras in a 10x10 array. When you fire a shot, each of them shoots at the same time. They will each have a slightly different view of the thing that you are taking a picture of. There are some mathematical models you can use to sort of "reverse engineer" the image and rebuild it in different ways. That's what this is kinda all about, except that instead of 100 cameras, you have thousands, and they are all formed by an array of lenses just above the sensor plane. So the image that comes out of the camera sensor has a bunch of circles of partial images that each differ from the one next to them just slightly. Then they use math to reassemble a single image from those partial images.

Here is my nutshell after reading through Ren Ng's very approachable paper.

In a traditional digital camera the incoming light is focused onto a plane, the sensor, which measures brightness at each photosensitive cell, pixel. This produces a final image in the sense that the resulting raster of values can be plotted as a coherent image.

A light-field (Plenoptic) camera uses the same kind of sensor, but places an array of microlenses in front of the sensor. This becomes the imaging plane, and defines the pixel resolution of post-processed images rather than the sensor as a whole. Each microlens captures light rays for the varying directions, producing a "sub-aperture image" that is recorded onto a group of cells on the sensor. A helpful diagram from the paper: 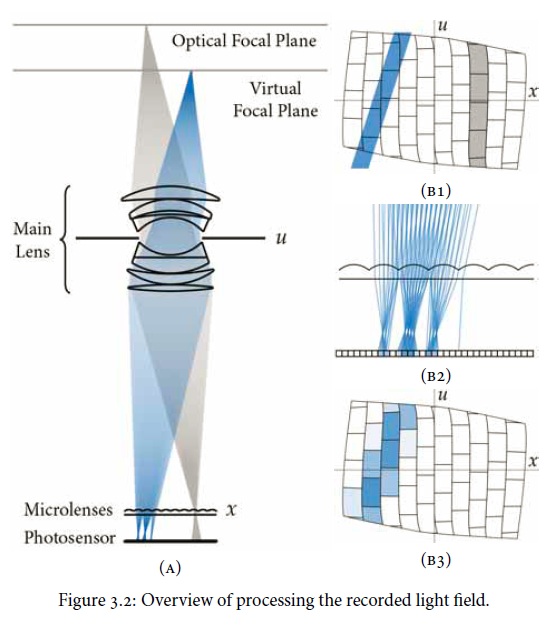 The conventional photograph that would have formed can be derived by summing the array of sub-aperture images for each pixel. But the point is that derivations become possible through the use of ray tracing computations. (Leonardo de Vinci would be envious.) In particular depth of field can be manipulated, thereby decoupling the traditional aperture/depth of field shackles. Lens aberration correction may be feasible as well.

The paper characterizes that the "total" light field, and "all" directions of light, can be captured, when in reality that would be limited by the number of microlenses, the sensor real estate under each one, etc. Of course like anything else, if enough resolution can be thrown at it, one could say "virtually all". So I suppose Plenoptic cameras would advertise pixel count AND ray count.

Not the answer you're looking for? Browse other questions tagged sensor digitizing light-field computational-photography or ask your own question.

62
Is there development in the world of lenses?
9
Real-time vs post-production blurs — what's the difference?
6
Is there reference code for implementing light field photography?

6
Is there reference code for implementing light field photography?
4
Light field based camera or dslr? Which should I choose?
5
What is special about the SENSOR in a Light-field camera?
4
Light-field shots entirely in focus?
5
How is the spectral response of a camera typically measured?
1
Can the tilt-shift effect be reversed by a light field camera?
11
What was the "revolutionary" digital camera with infinite depth of field and focus adjustment in post-processing?
5
In an image with camera shake and a point light source, can the shape of the point light source be used to practically reduce the shake significantly?
1
How does the defocus in a lightfield camera differ from a regular camera (i.e. a DSLR)?
3
Changing the field-of-view of a photo in post