Are small on-flash softboxes useful, or a gimmick?

There are a number of "mini-softbox" products on the market. These are meant to mount on a hotshoe flash (usually with an elastic band). 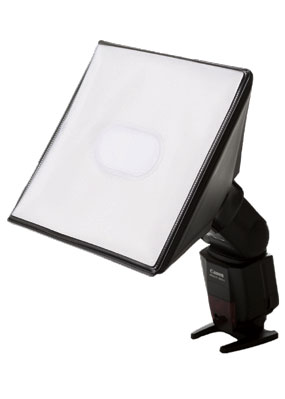 Are these worthwhile portable and low-space light modifiers, or are they more gimmick than useful? Are they large enough to meaningfully diffuse light for portraits? Are they too close to the flash?

What are the use cases that these are especially good for? What can't they do?

Are any particular designs better than others?

I have the Lumiquest Softbox III that's mentioned, and I find it useful as a super-portable softbox that's better than nothing. Given the option to have a huge softbox that would be my first choice, but the small softbox, placed very close to a subject, works really well and provides a much softer directional light than one would get with a bare flash or with just a simple diffuser such as an Omni-Bounce.

Like @dpollitt says, I would first attempt to bounce the flash, but when it isn't possible these are your next best thing.

I have had great success with the Gary Fong Lightsphere. You can see by the reviews on B&H that is is a very popular light modifier, especially among the wedding photography enthusiasts.

When they work the best for me is when I am in low light situations where bouncing my flash off of a white ceiling is not practical or possible.

They are not going to replace off-camera options, but when you have to stay portable and move around areas, and your camera is already at its highest light gathering capabilities, these are a very valid solution.

I think portrait work is going to be the best opportunity to use these light modifiers. If you are in a close cramped quarters, such as an apartment, you should still be able to bounce your flash or setup a simple lighting kit.

As everyone else is saying, better than nothing, so not completely useless, but in no way to be confused with a proper large softbox. You'll still be better off taking the flash off-camera rather than leaving it on-camera. You will still get an edge to your shadows. And there will be a hotspot. But if used in close, it can be worthwhile. I use a cheap eBay ripoff of the Lastolite Ezybox Speed-Lite, a small 8" softbox. It differs from the Lumiquest in that it's deeper and shaped more like a traditional softbox, and has an inner baffle as well as the outer one. It's a PITA to set up, and doesn't fold quite as flat, so you are giving up convenience over the Lumiquest. I far prefer (if the venue allows), bouncing with van Niekerk's Black Foamie Thing, for quality of light, cost, and convenience over using the small softbox.

Here's a shot I grabbed at Comic-Con in the huge hallway at the front of the convention center (that's Mike Carlin conveniently mugging for me with Karen Berger), with this softbox. 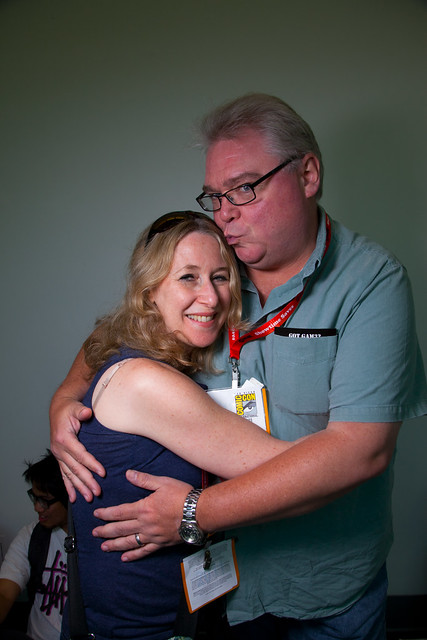 As the ceiling is well over 20' above, there really weren't any bounce surfaces around to use, and all the moving crowd of humanity that makes you feel like a salmon swimming upstream gives you limited working space, so it's not like you're going to set up a backdrop and stands (although there are folks who do that out back for the many many cosplayers). I had the flash off-camera with radio triggers, but was simply holding the flash in my left hand while I shot with the right. I think I had the diffuser panel pulled out and flopped down, so the flash would be set to its widest zoom setting as well inside the box.

Not the answer you're looking for? Browse other questions tagged flash lighting-modifiers accessories softbox or ask your own question.

2
What can you accomplish portrait-wise with a small softbox?
23
How do I set up a home portrait studio area in zero space?
11
Low budget entry level Speedlite?
8
What is a good softbox for small hotshoe flash?
2
Options for flash diffuser for travel?
3
Hot shoe flash units and softboxes for portraits; good beginner setup?
1
Would This "Flash Diffuser" Be Any Good for My SB700?
1
Portable Diffuser for shooting on the go

11
Cheap secondhand off-camera flash with manual power controls?
10
How do I compare a continuous light panel's brightness vs. flash through a softbox?
4
Does quality of light vary in different studio strobes and speedlites?
2
Correct flash zoom level for small diffuser box?
1
Softboxes: How many heads?
3
What are the most essential modifiers for shaping light?
4
How to approximate diffuse studio lighting outside
5
How to light and use flash in large rooms with dark ceiling and colored walls?
0
Options for a 5-flash 4-group lighting set-up using Canon (compatible) gear