What is the combination of lenses, that can achieve what a superzoom camera like Nikon P1000 can do (125X zoom)?

Let us say a DSLR lens has range like 40mm-320mm. I believe this means 8X zoom. However, 30mm-240mm would also be 8X zoom. So what would be the difference between these two lenses?

What be the pros / cons / limitations of using a single camera like P1000 vs a combination of lenses to achieve superzoom photography (apart from quality of course)?

"8x zoom" just means that the highest focal length possible with that lens is 8 times the lowest one. It doesn't say anything about what those focal lengths are. Given the same sensor size, the difference between your examples of a 40-320 lens and a 30-240 lens would be that the latter would allow you to shoot wider angles, the former narrower ones, although there would be significant overlap: if you want to take a photo at 40 to 240 mm, you could use either.

A superzoom camera like the P1000 does what it does by having a small sensor size. That means that, all else being equal, you will get a lot more noise on your photos. It also does not have quite as much resolution as many interchangeable lens cameras do. When considering to use one, you should consider whether you can achieve the same or a better result by (for example) taking photos at 600 mm with an APS-C camera (equivalent to 900 mm on full frame), then cropping as needed.

As for "combination of lenses", well, the P1000 starts at the field of view that 24 mm has on full-frame bodies and goes up to 3000. So you would need a combination of lenses that cover all that. The lower end is easy, the higher end is not realistic, that would require huge and expensive lenses, so that is why I wrote about cropping.

Compared to regular “full frame” 35mm camera, this is a field of view equivalent to a 24-3000mm lens.

To cover this focal range with a modern Digital “full frame” 35mm camera, you would need to have multiple zoom lenses, super telephoto lenses, and teleconverter multipliers.

The Canon RF 1200mm along with a 2x Teleconverter could get you close with a resulting 2400mm focal length. 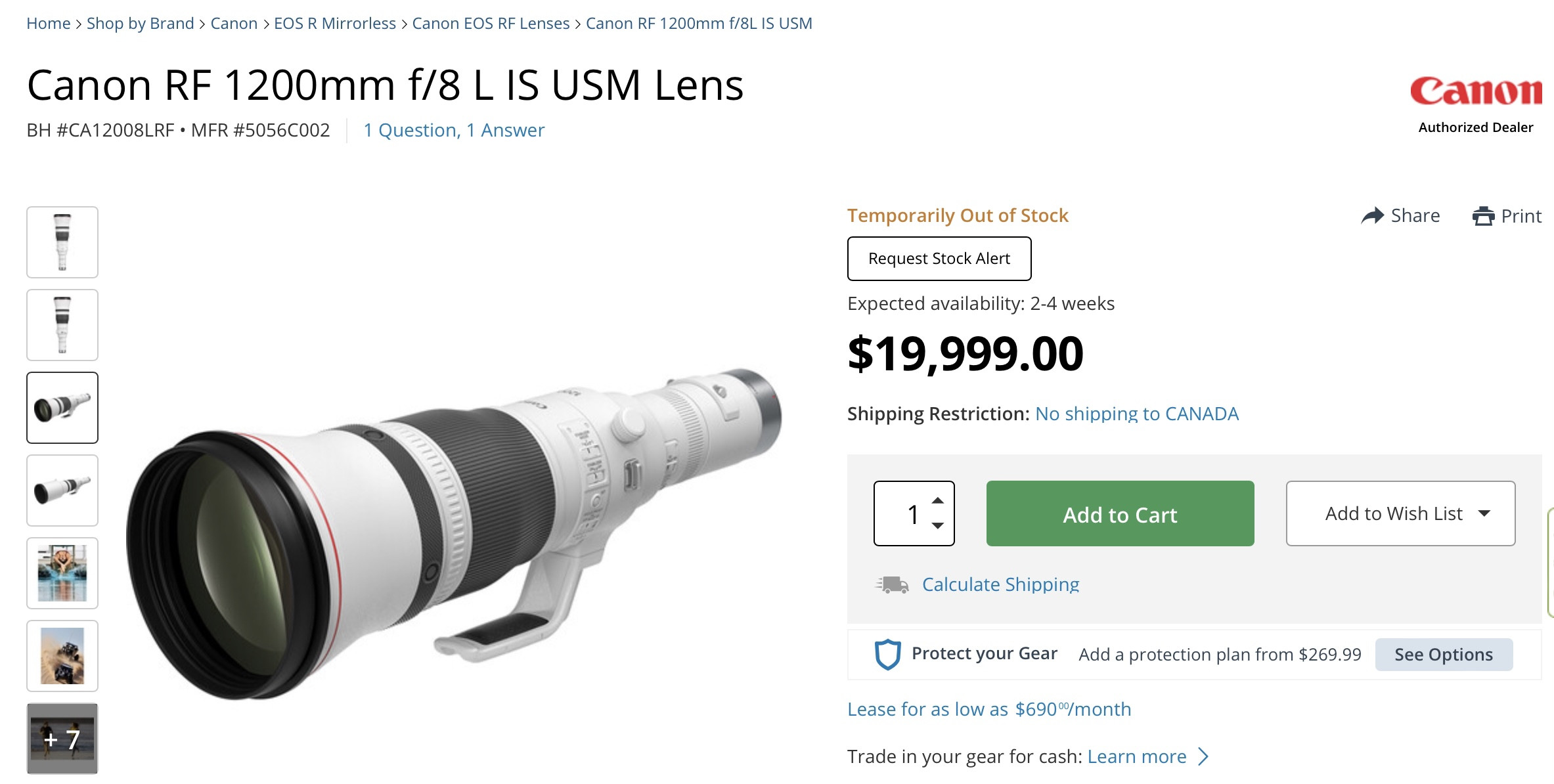 What is the combination of lenses, that can achieve what a superzoom camera like Nikon P1000 can do (125X zoom)?

Realistically? With an APS-C or full-frame dSLR? There is no such combination. The P1000 is something of an exotic camera.

Let us say a DSLR lens has range like 40mm-320mm. I believe this means 8X zoom. However, 30mm-240mm would also be 8X zoom. So what would be the difference between these two lenses?

Correct. "the ___x zoom" factor is only a relative measurement of how magnified the image can lenter link description hereook, and is a very simple calculation of how much longer the long end of the lens is from the widest.

Focal length is an absolute measurement and is a physical attribute of the lens. So, a 30-240mm lens could show a wider view at the 30mm end of the lens, but can't "zoom" as far in as the 40-320 could at 320mm. This online Nikon lens simulator can give you a sense of the effect of focal length on the coverage of the view.

How much it's cropped can be given by a "crop factor" which gives the proportionate cropping vs. a frame of 135 format (35mm film; 24mm x 36mm). The bigger that crop factor is, the more "zoomed in" a given focal length will look. But the focal length itself isn't changing.

Canon once made (from 1993-2005) a 1200mm f/5.6 supertelephoto lens for the EOS mount. It cost $150,000, was built-to-order, and took about 18 months from the time it was ordered to be delivered. You don't even want to think of their 5200mm lens. See pixelpuck's "Battle of Biggest Zoom Lenses Ever" article and possibly Roger Cicala of lensrentals demoing the support you need for supertelephotos on youtube.

Nikon essentially took what would be a supertelephoto lens on a dSLR and then put it on a tiny-sensor camera to get insane magnification.

What be the pros / cons / limitations of using a single camera like P1000 vs a combination of lenses to achieve superzoom photography (apart from quality of course)?

Pro is it's a single device and only $1000 (about the cost of a supertelephoto lens for a dSLR/mirroless system) that gives you more "reach" than you could get with interchangeable lenses.

The cons/limitations are going to be a small max. aperture (f/8) at the long end of the lens (so perched/standing/sitting birds fine. Birds in flight, not so much), that it's bigger/heavier than many interchangeable lens combinations, let alone other 1/2.3"- or 1"-format (2.7x crop) sensored superzoom bridges [e.g., an Panasonic FZ80, FZ1000 or Sony RX10]) [it weighs over 3 lbs], the need for stabilization/tripod if used at the long end (handholding is possible, but problematic), and all the image quality compromises that with a superzoom range in a lens. And the 1/2.3"-format sensor's ISO performance combined with the slower lens means low light shooting won't be easy.

See also this review of the P1000 for handheld wildlife use.

Any time something is way outside the norm in some desirable way it makes compromises to get it or other ones would do it, too. In the case of the P1000 the other answers have mentioned the noise and the lens softness from the huge zoom range. In addition, the lens will not stop down below f/8 because of diffraction effects on a sensor with such small pixel spacing. This limits your ability to increase the depth of field. The great 35mm equivalent focal length means you have more pixels on a small target.

I have one and use it mostly for photographing birds. They are small and far away, which is why the long reach is important. I will compare it with my Canon M6 MkII, which is a 32 MP mirrorless APS-C camera, coupled to a 150-600mm zoom, which I consider about the reasonable limit in the DSLR/mirrorless area. Yes, there are longer lenses but they are five figures in cost and sometimes five figures in grams as well.

The Canon gives an equivalent focal length of 960mm, which I will round to 1000mm. If you take a picture of something that fills the frame at 3000mm, you have to crop the Canon to 1/3 of the frame in each direction, which leaves you about 3.5 MP. Those pixels are better than the ones on the P1000 for the reasons we have said and you can get a nice photo for screen display. If you get closer to the bird and don't have to crop so much and the Canon has an advantage, but it is 5 lb instead of 3.

Most of the time the birds are "targets of opportunity" when I am out for a walk/hike. I don't spend much time trying to get close, let alone stake out places that birds come. The P1000 meets my needs well, but it is definitely not for everyone. If you don't use the long zoom, other cameras will be preferable.

79
How do I convert lens focal length (mm) to x-times optical zoom?

7
Alternative/third-party superzoom for Nikon?
11
Are superzoom lenses really so bad?
0
Are superzoom cameras practical/useful when photographing nature?
4
Why do superzoom designs keep expanding on the telephoto rather than wide-angle end?
1
Zoom conversion help? Superzoom vs Nikon 55-300 DX lens
2
Why does my superzoom lens sometimes miss focus?
10
How do I calculate the difference in lens reach between a superzoom compact and a DSLR zoom lens?
0
Compare superzoom image with DSLR image