Why are dedicated light meters supposed to be independent on the sensor?

As I have understood by this question, an exposure value of a certain scenario cought from a digital sensor (CCD or CMOS) results from:

Where ISO is not the sensor sensitivity (which is proportional to the sensor pixel area and to its quantum efficiency), it is just the tunable amplification factor.

When using an on board lightmeter, I guess it, once measured the (reflected) amount of light, it adds up the sensor sensitivity contribution to tell us if the image we are going to take will be properly exposed.

Well, this conversion factor is unknown to a dedicated external light meter. So, I guess its suggestions may be not optimal for all sensors, and may even depend on the utilized lens.

I'd say that a calibration procedure would definitevely solve this question. But why don't usually people even think at this? Is it a negligible effect? Would this effect cause less accuracy than the low accuracy provoked by the reflective measurement of a TTL on board light meter?

Will an old light meter, calibrated for old sensors with lower quantum efficiency, give us proper suggestions when utilizing an efficient camera?

My answer is based on my humble logic so some technical details may differ from the reality :)

After the sensor the amplifier is tuned on such way so if you have particular amount of light which reach the sensor, base ISO, you will have (more or less) normally exposed image (after the ADC). And because external lightmeter get as input this same light it can calculate (with some accuracy) the values of aperture, ISO and shutter speed (usually you have two of them preset, so it calculate the third one).

And these settings of course vary slightly from camera to camera which require to calibrate external light meter for particular camera/sensor. Usually external light meter provide more precise results because they can have much bigger light metering sensor inside and do not have (so much) constrains as power.

Where ISO is not the sensor sensitivity (which is proportional to the sensor pixel area and to its quantum efficiency), it is just the tunable amplification factor.

This is not correct... the base ISO(s) for the sensor are based (at least closely) on the sensor's reactivity/sensitivity to light. See the japanese standard CIPA DC-004 2004. And part of that standard is that the camera's metered exposure, including ISO, closely match that which would be achieved with another metering system (external/hand held) and/or w/ external lighting (guide number).

Any ISO above base is the additional amplification required to achieve the same "standard"... I.e. ISO 800 is different amplifications above different base ISO's (e.g. it's 8x for a sensor with base ISO 100, and 4x for a sensor with base ISO 200). But in all cases it results in a similar exposure. So, the "conversion factor" is not unknown to the maker of an external meter (within a small tolerance).

I did reply to your other question... perhaps you had not seen it?

Is it a negligible effect? Would this effect cause less accuracy than the low accuracy provoked by the reflective measurement of a TTL on board light meter?

There are several "standards"; Sensor Saturation, Standard Output Sensitivity, and Recommended Exposure Index... of the three, REI is the least standardized; and it is generally underrated (overstated to protect against the digital sensor's harsh clipping characteristic)... but it is still generally w/in about .5 stops of the other methods.

But in the end none of this matters too much... there is no such thing as a correct exposure in artistic terms. E.g. with slide film it was quite common to intentionally underexpose the film by assigning it a higher ISO in order to generate more saturated colors and take advantage of the film's exposure characteristics. Similarly, there is nothing saying that the metered exposure will generate the image you want to create... as often as not it won't. Both cameras and handheld meters (generally) have a way to calibrate them; to each other, or to generate the results you prefer (offset the metered exposure readings).

This is the Nikon's Z9's REI ISO ratings compared against a more standardized SOS measurement... it has one of the largest offsets I have seen, but still less than 1 stop. 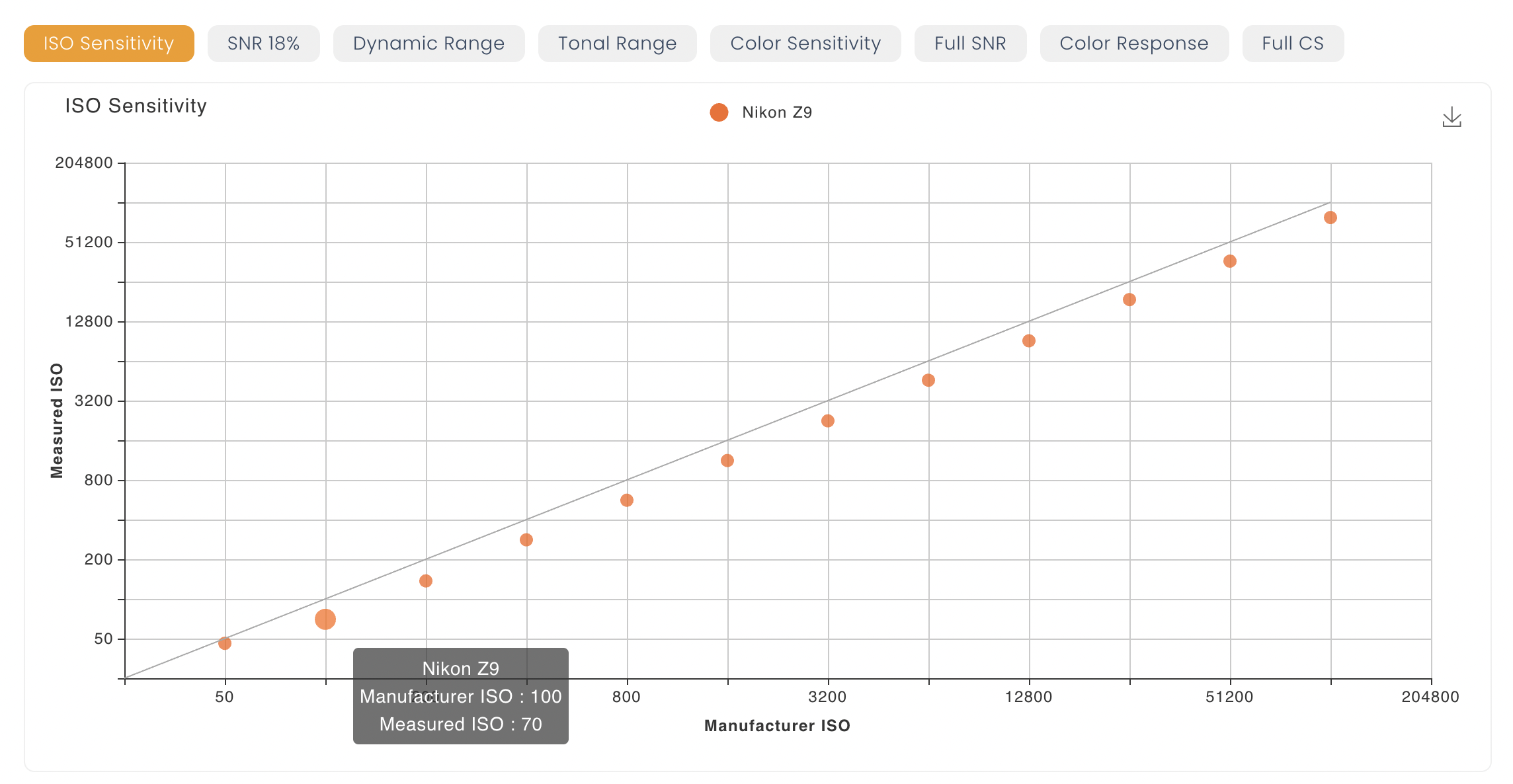 Well, this conversion factor is unknown to a dedicated external light meter.

No, the sensor reacts to the light meter exposure parameters in EV, not the other way around. EV 0 is f/0 at 1 second, and ISO is basically a multiplication (in film, of sensitivity). Normal bright direct sunlight (not hazy, etc) is near EV 15.

In any external light meter, you have to enter into it your ISO and fstop or shutter speed, so it will know the other value (based on the brightness it sees).

0
Which is the link between a digital ISO value (e.g. 100) and the sensor sensitivity?

43
Why use a dedicated light meter instead of the one built into the camera?
5
How do dedicated light meters account for light transmittance?
0
Why is my Canon 7D light sensor under-sensitive?
2
How do analog photography light meters work?
1
Why is ISO counted as part of the exposure triangle?
0
Light Meters and Histograms
1
Using dedicated light-meters in moon-lit / very dark scenes
2
For the same FOV and f-stop, will total luminous flux increase linearly with sensor area?
0
Which is the link between a digital ISO value (e.g. 100) and the sensor sensitivity?
0
Why are there Lux - EV conversion tables, and not Lux Seconds - EV conversion table?