Is My Entire Roll Ruined?

I'm fairly new to photography on an actual film camera. I went ahead and bought a Kodak Ultra F9.

I'm sure this gets asked a lot but on the first roll I had accidentally hit the rewind button and opened up the back to investigate for a few seconds before closing it. Later of course I found out that was NOT the right thing to do.

The second roll I was all finished and had made sure I did not open the camera until it was ready. To make a long story short I opened the camera, thinking it was completely rewound, and it wasn't. I did eventually get it and shipped them both to a lab to be scanned.

Both times I opened the camera were inside with dim lighting and closed within seconds. I know there is not much hope for a couple exposures, but I am worried the entire roll of film will come back destroyed with light leaks on all of them. I am just worried and excited because developing film does cost a bit of money and I'm wondering if it will come back completely blank and not useful.

Here is a typical example of light-leak damage. Note the exposure along the long edge, and the evidence of more light coming through the sprocket holes than in the area in-between holes. 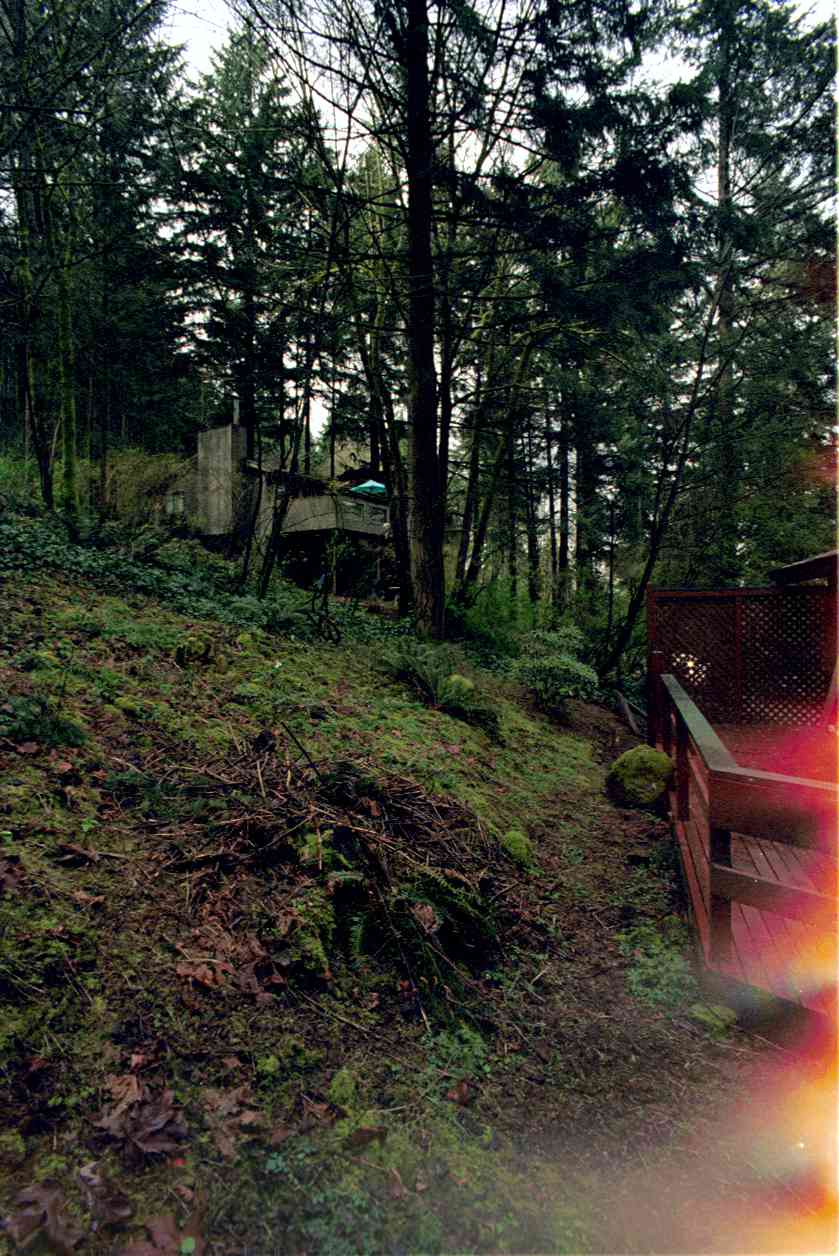 That shot might be salvageable with cropping — it was fairly deep on the take-up spool!

But this is how it will look closer to the surface of the take-up spool. I think this was the next layer below the totally exposed surface layer. 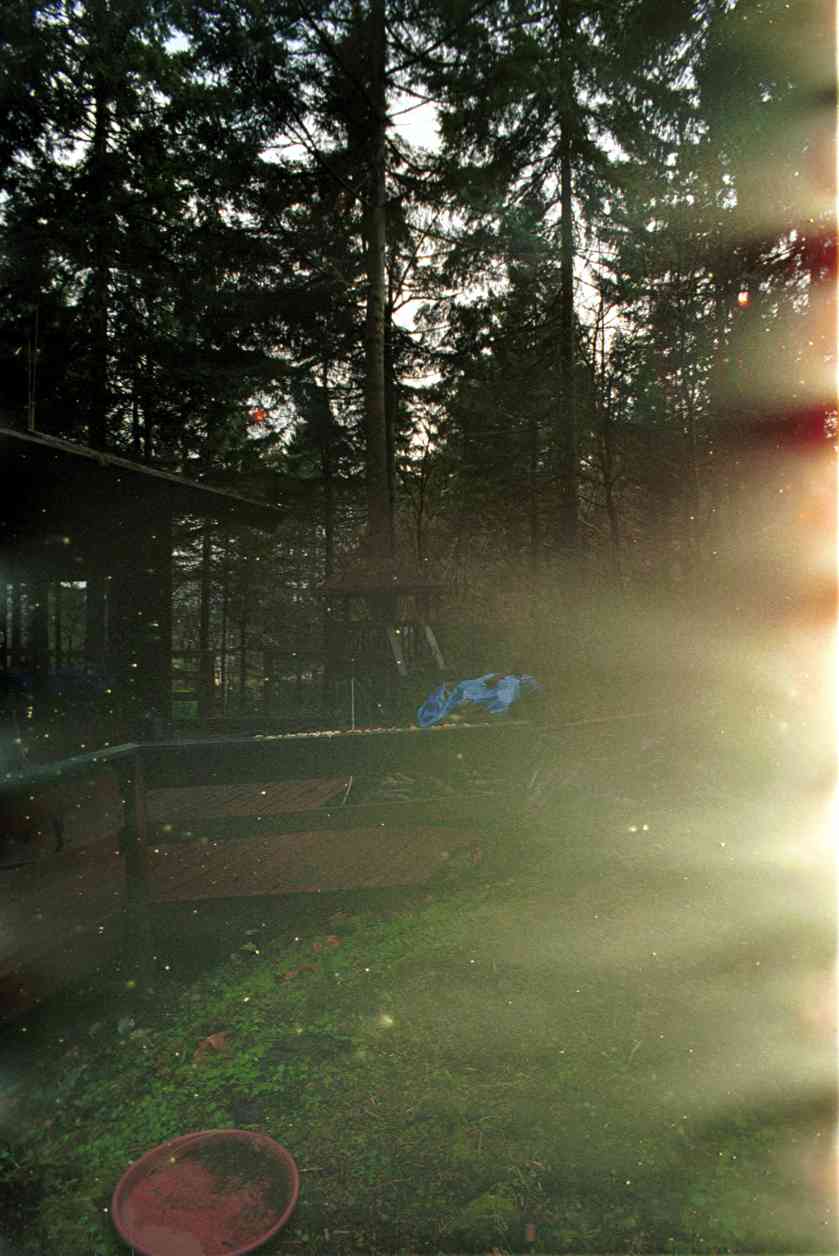 Any exposures that were fully exposed to light when opened are likely destroyed or washed-out, but any fully inside the canister or within the reel (not visible) of the take-up reel should be OK.

Undeveloped film records a photo by chemically reacting to light. Even after it has been exposed properly in the camera, it remains sensitive to additional light until it has been "fixed" at the end of the development process.

Used properly in a camera the amount of light allowed to shine on the film is comparatively small. Film needs to be very sensitive to light in order to allow taking photos using short exposure times that typically range from 1/60-1/1000 seconds or even shorter while only allowing light to shine on it through a small hole (the entrance pupil of the lens).

When the back of a camera is opened in an environment with pretty much any light present the amount of light striking the film is MUCH greater than what is typically allowed through a lens. With no lens and light box controlling how much light is allowed to shine on the film, effectively you're at near zero focal length lens with a near infinitely large aperture. The light is also allowed to shine on the film for MUCH longer that is the case for a typical shutter duration that is only fractions of a second long.

Any parts of the film that are exposed to direct light when the back of the camera is opened will be completely fogged. That is, when developed the negative will turn completely opaque and not allow any light to pass through.

Parts of the film that are inside the film cannister should be protected as long as the felt around the opening that the film passes through is not damaged.

Parts of the film that are wound on the camera's takeup spool are what might or might not be safe. It all depends upon several factors:

The main thing to learn from this experience is to never open the back of your camera unless you are SURE the film has been wound back into the film cannister.

If there's any doubt at all, then only open the back in a completely dark room, such as an interior room with no windows and a rolled up towel blocking any light from shining in under the bottom of the door and feel with your fingers to see if the film has been rewound or not. Or you can use what is known as a changing bag that was used back in the days before roll film came protected inside light proof cassettes. Larger and medium format film cameras still use film that is best loaded in complete darkness. Changing bags are made of solid, opaque material and have arm holes with elastic that hold the material tightly against the user's arms.

Simple! Anything exposed to direct light will be washed up and unusable. Anything left in the plastic casing that has not seen the extra light will be ok.

The plastic casing of a film is supposed to provide a light tight holder, so that the film held inside it does not get contaminated. Even if exposed to light, the film inside the holder is fine! When sent for development, the entire holder is removed from the camera and brought to the development studio. This happens in broad day light and none of the photos are corrupted.

Not the answer you're looking for? Browse other questions tagged film 35mm kodak or ask your own question.

3
My roll of film didn't rewind inside all the way
5
My 35 mm film is not rewinding into canister — was the roll even used?
6
Olympus OM-10 35mm - Film not gone all the way back into the cartridge
1
Film did not rewind
2
New roll of film rewound into canister after 4 exposures
5
My negative is completely black and opaque — is this a camera problem, my mistake, or the lab's?
2
35mm White line across photo / Yellow tint all over exposure
2
Did I ruin my film when I opened my Canon Sure-shot telemax film camera?
3
How can I tell if I've broken the rewind button on my AE-1?
1
Is my roll completely ruined