How can I tell which 3rd party flashes are compatible with Canon's SL3 missing pin hot shoe mount?

Around the year 2019/2020 many suggestions have been made online on which flashes work with the pinless SL3 hot shoe. Since then most of those suggestions are no longer available for purchase.

Probably needless to say, but just to be clear, this is the problem with SL3 cameras: 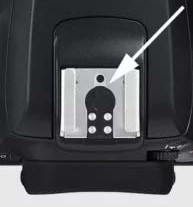 My question is: how can I tell which flashes should be compatible? What part of flash specifications will make me go "oh okay, there's a 90% chance this will work"?

I know there are different degrees of compatibility. Some setups will let me just fire the flash and nothing else, some will let me influence the flash settings. But that's all I've learned so far.

Personally I'm going to use it mostly on macro photography with a diffuser. I haven't tried it yet but it looks like I could manage with just a simple cheap speedlite which doesn't offer too much.

I hear Godox tends to be pretty compatible, but can I just buy any modern Godox speedlite? (for example Godox TT350). I called the store, they haven't even heard of the SL3 issue! And for example they sell Yongnuo speedlites (e.g. YN-565EXIII) that they describe as "Canon hot shoe. Compatible with all Canon cameras." which I find even more confusing.

I also know there's this trick with flash transmitter&trigger combo, but that's not really what I'm after right now.

The pin that is missing is the pc sync pin. Essentially it is a switch. But today's cameras have intelligent flash systems that do pre-flash and then control the output...ie. more than "on-off". The PC Sync is an on-off switch. Canon's E-TTL (II) flashes work with this hostshoe, but a simple dumb flash no longer will.

Therefore, most any flash that says it is Canon E-TTL compatible will likely work, even with this pc sync pin missing.

Obviously, checking for actual compatibility with a 250D either in online reportage, or by actually buying and trying yourself would probably be best. Asking the seller directly before purchasing would be your next best option (i.e., B&H support specifically mentions in its Yongnuo YN600EX II listing Q&As that it is incompatible with the SL3 while two other answers simply guess that because it's Canon/eTTL-II compatible it will work).

Checking for eTTL-II compatibility will NOT be a guarantee of the flash working with full function on an SL3. But if it doesn't do eTTL II, it's definitely incompatible. The flash must have all five of the Canon pins on its foot to be able to talk "around" the missing sync contact. Single-pin flashes, obviously, can't work at all.

If not explicitly stated as compatible, the flash needs to be firmware upgradeable with an upgrade specifically to add this support. If an eTTL-II 3rd-party flash is an older model that existed before the SL3/T7/T100 were introduced, and it's not firmware upgradeable, it's highly unlikely it will be compatible.

Godox's flashes only gained compatibility with the T7/2000D and T100/4000D (the other two models missing the sync contact) via firmware updates. And none of the Godox speedlight firmware updates are described as including SL3/250D compatibility. Despite the Petapixel article on these updates widely spreading the misinformation it would work for all the Canon bodies with a missing sync contact, they made an assumption that I've since seen reported as untrue.

The Godox gear that has been firmware updated explicitly for SL3 compatibility are the Godox X1T-C and XPro-C transmitters (the X2T-C apparently already had the fix when it was released).

There are reports, as you mention, that stacking a speedlight on top of a Godox X1T/X2T-C transmitter on the hotshoe and can be a solution for single-pin manual flash gear. But I'm not sure if it works for full TTL/HSS communication, particularly since that hotshoe has been proven not to be a true TTL-passthrough hotshoe and is a single-pin manual one on the Fuji, MFT, and Pentax versions of those transmitters.

But at this time, AFAIK, Godox may be the only option, and I'm not 100% sure that it works. I submitted a question about SL3 compatibility to B&H's TT685 II-C listing, and they replied it is compatible, but I'm not 100% sold until I read a few folks online saying that it works :). You may have to just try it and see.

I think at this time the only "100% guaranteed to be compatible with the SL3" speedlights are the OEM/1st-party ones made by Canon, such as the EL-100.

This is hypothetical, probably worthly of testing.

I would say that you could still use a dumb flash triggered with remote control.

You could have a radio trigger compatible with the system and on top of that a dumb flash that can receive the signal of the trigger.

In short most flashes that say they are Canon compatible will probably work, even if this PC sync pin is missing. Keep these instructions in mind to improve the quality of use.

Not the answer you're looking for? Browse other questions tagged hotshoe-flash or ask your own question.

4
What third party Speedlites work best with Canon?
5
Ring flash for 430EX II and Canon Rebel 500D
1
Canon 580EX compatible with xxxEX II flashes?
7
Are there any accessories that can protect my camera from high voltage flash guns?
5
How do the Sigma flashes compare to (and work with) Canon flashes on Canon bodies?
0
Why Can't I Set My Flash Intensity with My Phottix Odin 2 in Manual Mode
0
Why are external hotshoe flashes firing early in PTTL mode and not at all in manual on my A6000?
2
Why is my external flash (speedlight) not working on-camera?
3
Universal wireless radio transmitter that can trigger Elinchrom studio strobes, Yongnuo speedlites and Godox flash
0
Broken hot shoe for Canon 5D Mk III