How can I get a 'touristy' photo of myself when travelling alone?

I'll shortly be travelling to new york and staying with a friend (but mostly touring on my own). As much as I enjoy regular photography my only regret from my last holiday is that I didn't have any photos of myself there! So I'd like to take some touristy photos of myself infront of some of the big landmarks.

I've got a crop sensor Canon with my widest lens being 18mm and a point and shoot, neither of which give me a wide enough shot hand held at arms length. I've considered hiring a wider lens, using a wide angle filter, asking others or putting the camera down and using timer but I was wondering if anyone had better solutions?

I once saw someone taking this kind of picture using a light monopod. He hand-held the monopod and used the camera's self-timer to get the shot. The camera was a Point and Shoot. He sometimes used street objects such as park benches, trash cans, cars, etc, to help reduce camera shake.

The monopod was used just to avoid being so close to the camera, it was still being handheld. I asked him what he was doing and he showed me some of the pictures. He had some practice doing it because he had some real good shots. In most shots he tried to frame himself with elbows out of the picture, thus hiding the monopod!

Later on, I implemented this idea myself. I made a "selfie stick" with a short length of pvc pipe and a very small and cheap tripod head. I used it with a small camera (aprox weight 1 lb/0.5 kilogram) and a remote wired shutter. I added a bicycle handlebar grip for aesthetics and comfort. The remote shutter was affixed to the pipe by using elastic bands (the ones normally used for hair).

I had to resort to his because there are no "Selfie sticks" compatible enough with mi particular camera, and at the time this question was posted, those sticks existed but where not so popular yet, but there are many ready made solutions nowadays.

Forget holding the camera at an arms length if you also want the picture to be good. Everything will be distorted, and you will have a silly look in your face, probably also with strange lighting.

If what you are aiming for is a picture of you in front of the famous landmarks, then I would simply ask a stranger. Try to look for one carrying a camera, as that would indicate that he is also a tourist, and therefore not a local pocket thief. Also, if you fear that the person might run off with you camera, find one that seems to be part of a group, or find a couple.

In this case hand them your point'n shoot instead of the dSLR because:

Be prepared, you will probably not get very remarkable shots, as most people don't know how to compose a picture properly, for example, they will place you bullseye in the photo. But you didn't ask how to get great photos, you asked how to get touristy photos.

One way is to just set reasonably wide focal length, something around f/5.6, put the camera on nearest rock/bench/nice spot on the ground, and take a picture with a self-timer.

It works even for groups: 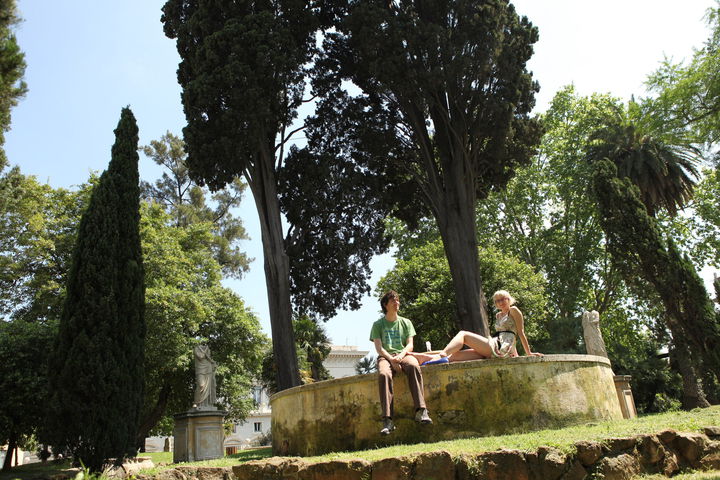 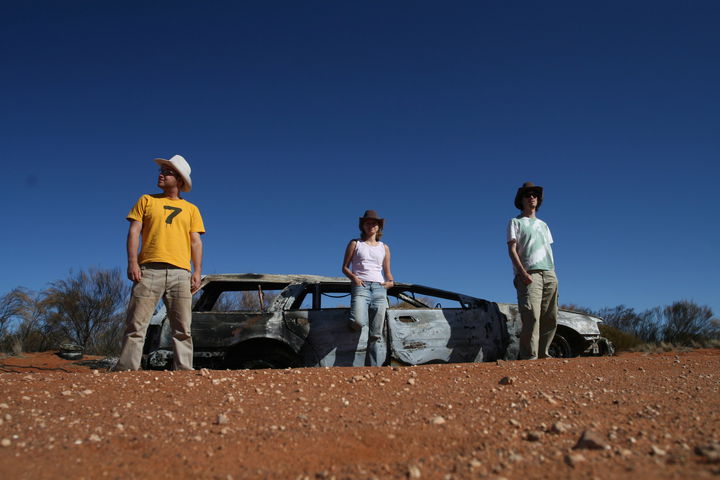 I traveled to Washington D.C. for a few days on business by myself a few years ago. I toured the city alone to visit the sights and like you I wanted some images of myself in front of the famous landmarks.

To achieve this I did a few things

One challenge is to accurately lock in the focus while using a tripod. I did have to estimate the distance to focus at, especially for the shot at f/2.8. You can either use the distance window on the higher end Canon lenses to help determine what to focus at, or you can shoot right next to an object that is just out of the frame - focus on that object first, then recompose to remove the object but keep focus the same.

All of these shots below were with a Canon 40D and a Canon 17-55mm f/2.8 IS USM lens, mounted on a lightweight travel tripod that I brought along. The tripod was small enough to throw in a backpack when I went into museums or was not using it.

Frankly, I'm not comfortable handing someone $2,000 in camera equipment, and they will probably do a bad job of using it anyways. A point and shoot is an option, but will obviously not give you the same quality as a DSLR might.

If you don't want to bring a tripod, you can use almost all of the same techniques, you will just have to look out for objects to position the camera on that can act as a tripod. You will also want to consider how much of the image could be of the object the camera is sitting on, that you will later want to crop out.

If all else fails, and the above isn't working for you, find a touristy looking person with an SLR already around their neck, and ask them to take the shot for you. They won't be afraid of your camera, and they probably aren't going to run away and steal someone else's camera anyways. 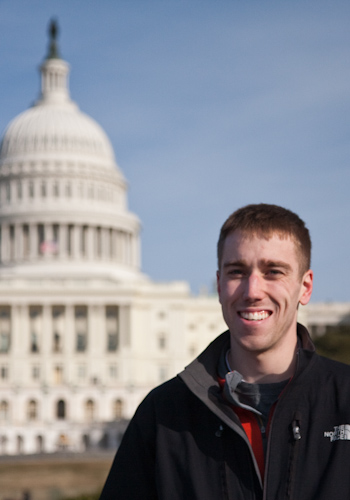 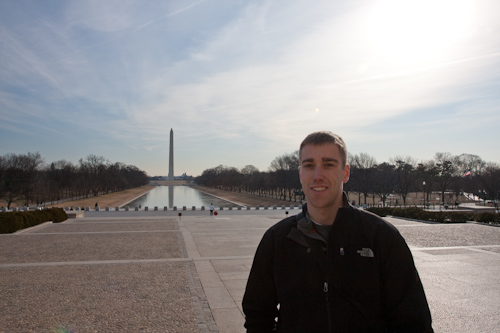 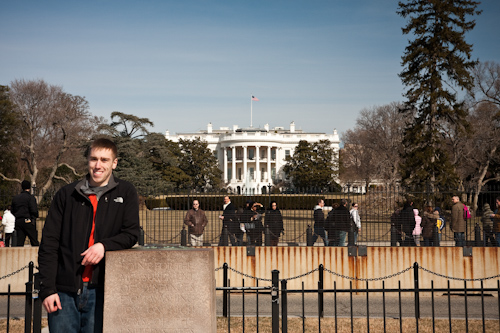 I'm a little surprised that nobody has mentioned a wireless remote. These are pretty common across the camera brands and use of them with a 2 (or greater) second timer gives you a chance to hide it before the picture is taken. Worth checking out if your Canon is a dSLR, I'm not sure if the same options exist in the point and shoot world.

I've used them for my own stuff in the past. Works nice: 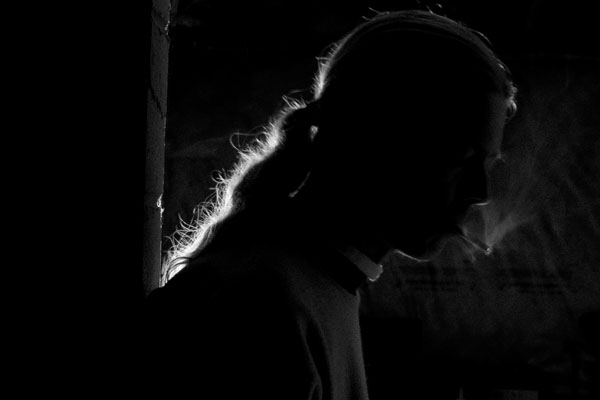 I've since quit smoking, so this is now a collecters piece. ;)

Get a tripod, a wireless shutter release and a good pair of running shoes.

In addition to the obvious things like mini-tripods, beanbags, and asking strangers to help, see if you can make some creative shots with reflections. Mirrors, water, car windows, etc. may be able to get both you and the landmark together in an unusual composition.

I would think 18mm is wide enough to get some face shots with the landmark in the background, at least some of the time. Don't restrict yourself to the typical full body shot of a tourist standing in front of the landmark. An arms length view of the top half of your head with the top half of the Statue of Liberty sticking out of it might make a fabulous shot - or it might not, but you won't know until you try!

A very appropriate tripod would be the gorillapod by joby. This tripod holds a good amount of weight and can be put on the ground or wrapped around a pole to get an image at or above eye level, which always makes a good looking image. And as suggested by others use a wireless remote or like me just use the self timer function.

Hama makes a mini tripod along with an extender tube for point and shoot cameras, expressly with the intent of making self portraits. It appears to me that it's a recipe for super camera shake, but in good light, it should prove adequate for precisely this kind of photography. Here's the link to it.

Check out the Quik Pod and their cheesy website: http://www.quikpod.com/ 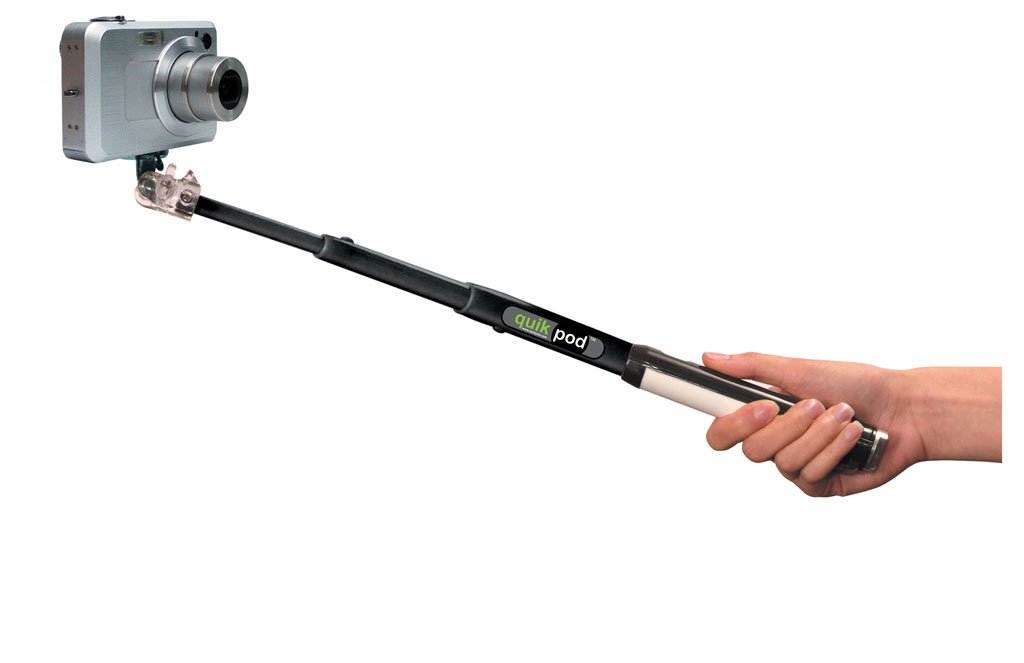 You can get a Joby gorillpod and a camera remote for taking self pictures. Or you can get an action camera with selfie stick.

I don't really travel with my tripod and I think that shooting self portraits infront of monuments doesn't really make for good travel pics.. for a place like New York, you'd want to catch the atmosphere and the scene.. and in your case..infront of a landmark.

Just walk up to any tourist who has a similar camera around his neck (and knowing NYC.. there'll be tons) and ask him to click a pic or two.. strike a conversation.. ask if they'd want to be photographed with you.. and ask the third person to take your pics..

Not the answer you're looking for? Browse other questions tagged travel self-portrait style or ask your own question.

2
What alternatives are there to a selfie stick for self-portraits while traveling?

42
How can I backup my photos while travelling?
54
How can I backup my RAW photos while travelling without Internet access?
23
How can I best pose myself for a headshot self-portrait?
26
When doing portraits, how to get serious insightful expressions?
29
How should I pack equipment when travelling in countries with high crime rates?
6
How can I create a photo with vintage look, focused on the lips?
8
Is it advisable to bring a camera grip when travelling to China?
8
How can I tell when to stop adding an effect?
3
How can I get correct focus when taking a self portrait with a DSLR?
3
How to break mental models when taking pictures?