What causes these light leaks on bulk loaded film

I have several rolls with similar light leaks such as below, but more examples here and here.

These rolls are all bulk loaded, in recycled canisters (meaning rolls that came from a lab which new film was spooled into). The leaks appear in various cameras that have not shown issues with other, non bulk loaded rolls. Additionally, the leak is always in the same spot on the frame. This last point is not limited to full frame, as the last linked example comes from a Hasselblad X-Pan.

Any idea what could cause these artefacts? I am puzzled, as I would think a canister with shot up light seals would be leaking light outside of a camera just as much. 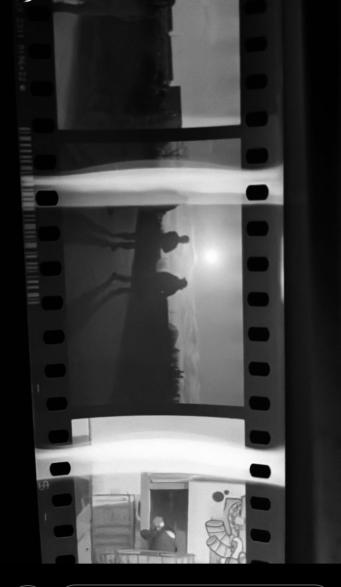 After a lot of sleuthing, it was discovered the light leaks are caused by the transparent coating on the bulk loaded labels.

Same place on every frame suggests the take up spool side of the camera to me.

The consistency of light leak intensity and complete exposure are also consistent with that edge of the camera. It doesn’t look like an exposure artifact.

A possible cause via bulk loading would be how the bulk film is attached to the spindle or old leader. My experience is the amount and orientation of the tape is important to smooth operation of bulk rolled cartridges.

[edit] worth noting the Xpan spools all the film out of the cartridge and then “rewinds” each frame into the cartridge when exposed. This behavior means that a problem with the hinge seals would leak light onto the film before exposing a frame rather than afterwards. This has implications for troubleshooting procedures.

Bulk loading film as its share of perils. Bulk film comes to you in a light-proof wrapper packed in a light-proof metal or plastic canister. Today’s films are likely panchromatic (sensitive to all colors) thus no safelight can be uses (exception – a dim green far distant might be OK). Best if no safelight is used.

You must unpack and unspool the film in total darkness. A darkroom that is totally dark is hard to find. You may think its safe but after being in total darkness for about 20 minutes you might change your mind. The human eye will dark-adapt over time and you might discover that some of the dark has escaped.

Assuming your work area is safe, now you go to work. You strip off a meter or so and spool this into a cassette. Is the cassette light-tight? Many a roll has spoiled due to risky cassettes. Also, the base of the film can allow light piping. That’s light entering the cassette via the clear film base. 35mm film often has a gray base to fort light piping. Some have an opaque backing called a remjet (removable jet black). This is lampblack carbon coated using an adhesive that softens in an alkaline developer.

Often work using a bulk loader. This is a light proof spooler that we load in total darkness. Sometimes the bulk loader allows the dark to leak out. I could go on and on about the different dangers but likely you have experienced some of these threats.

Not the answer you're looking for? Browse other questions tagged film light-leaks bulk-load or ask your own question.

3
How do I avoid torn sprocket holes with bulk loaded film?
3
Is this streak across multiple photos from a (35mm) Zenit 12SD caused by a light leak?
3
When bulk loading film, do metal or plastic reloadable cartrigage leak less light?
4
Orange and other artifacts in photos from film camera
3
Light leaks in RB67 film handling?
1
I accidentially exposed a bulk film roll from a bulk film loader. Are there chances of recovering parts of that bulk film?
1
Light leaks all over the photos
1
Light leaks on OM10
3
What are these curved, dark bands at the top of my photo?
0
Camera light leak or processing issue?