What is this speck in my camera?

I was playing around in Live View this evening with the string of Christmas lights above our fireplace (we just finally took the tree down but decided to keep the lights up). I was using my Canon Rebel T7 with the Canon EF 50mm f/1.8 STM. I've had this lens for only a few months.

I noticed a speck that seemed to be "floating" around as I moved the camera. I had the lens focused at the far macro end, so each bulb on the Christmas lights strand was a large round circle on the screen. I couldn't think of a way to describe it or show it in still photos, so I took a video where it's clearly visible. In the video, the aperture is constant (at f/1.8), the only thing I'm adjusting is the focus. There's the large speck just left-of-center that you can see I'm trying to show at different points in focus, and then toward the end of the video I noticed a bunch more specks toward the bottom right.

I don't think it's sensor dust; I took a look at the sensor and I couldn't see anything in that area. Moreover, the spot seems to move across the screen, which (as I understand) could not be caused by sensor dust.

I haven't seen this on any of my other lenses, and I noticed these spots inside the 50mm. I know, I've read the Lensrentals blog post about lens dust, but this dust is inside the lens which has me wondering.

I attempted to look for the speck using the viewfinder, but I was not able to find it. (This lens wide-open through the viewfinder has never looked quite right, though, so I'm not sure that this point means much.)

Is it possible that the specks I'm seeing in the video are coming from this dust in the lens? Or is there something else that could cause this? If the spots in the image are due to this dust, is disassembling this lens something that a mildly handy layperson could handle? (I'm comfortable taking apart laptops and other electronics, but I know lenses need to be extremely precise in certain places.) Or, since this lens is still new, is there any chance I could send it to Canon to get it taken care of (preferably inexpensively)? 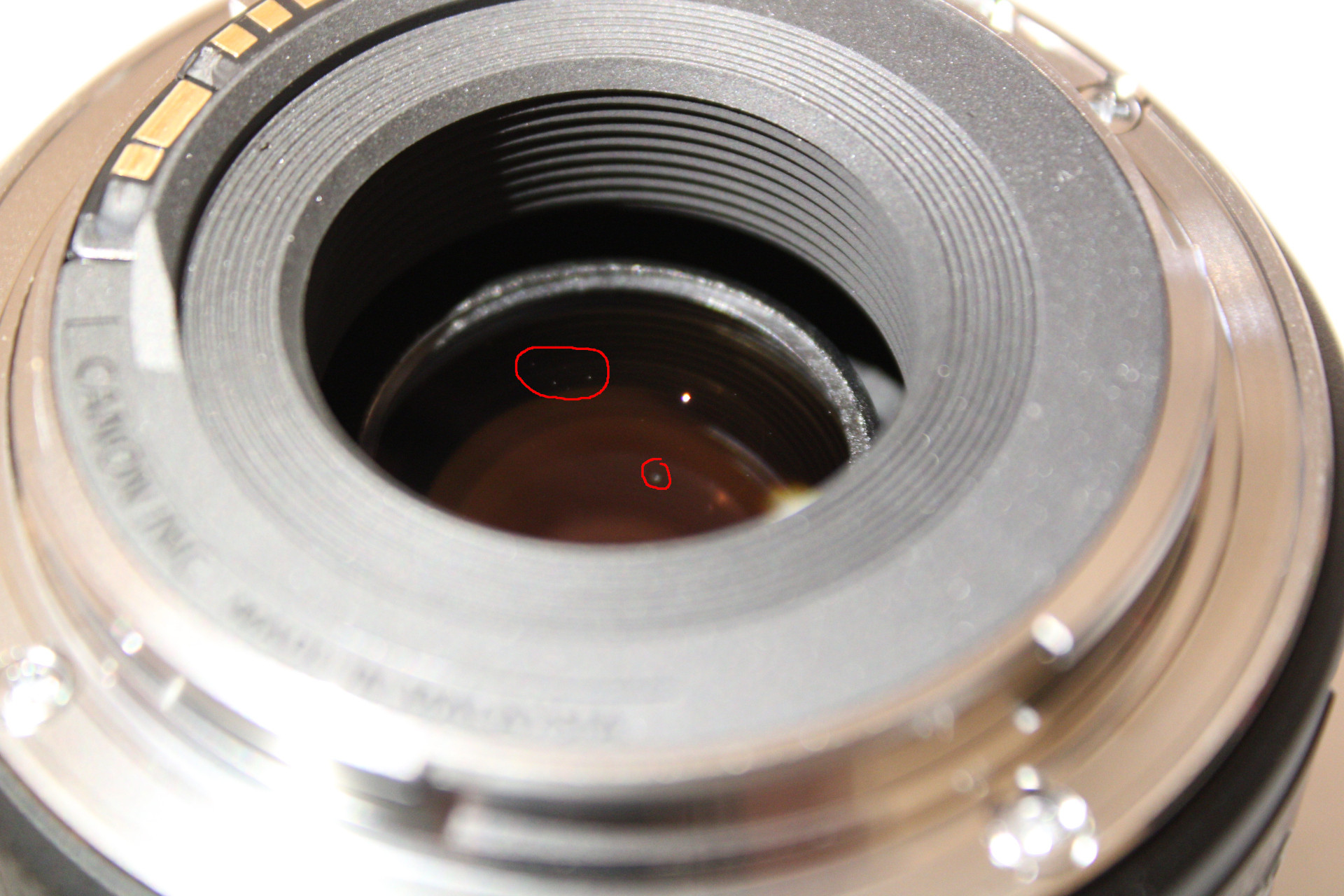 Update: Turns out it was sensor dust after all.

I took another look at it today. The dust had moved around a bit, and found I could still easily see the specks at f/5.6. I have the 18-55 f/3.5-5.6 kit lens, so I decided to try again with the kit lens, and this time I could see the specks with that lens too! So either I had an identical dust situation in the kit lens or I've been barking up the wrong tree. I carefully used a bulb-like device* to blow on the sensor (my Rebel T7 doesn't have built-in sensor cleaning), and when I went back to check for spots, they were almost completely gone!

I never thought that specks that appear to move around can still be due to sensor dust, but I'm glad it's not an issue with the lens!

*I don't have a proper bulb blower, but a clean and dry turkey baster was close enough for me!

Not to worry, the speck is the shadow of a bit of dust on the protective cover glass that hovers over the digital image sensor. Digital cameras that allow lens removal and replacement exposure the image sensor during the interchange. In other words, dust and other contaminates frequently find their way inside and settle on the sensor cover glass. Such contaminates block light thus their shadow shows up as a dark artifact.

Your countermeasure is to clean the surface of the cover glass. This is a delicate operation that will require you to procure the customary tools. You should now search photo sites on the web and research sensor cleaning. You can do this but first you need to learn the techniques for this task.

More serious, if I am wrong, it could be a dead photo site. This is a pixel on the sensor that not reacting to light. No remedy for this.

Because it shows at wide aperture in the bokeh and it moves with focus/light shift, this is lens dust/dirt. Sensor dust is the opposite (shows stopped down w diffused light source and doesn't shift).

Look through the lens with a flashlight in a dark room. (I think you can set the electronic aperture open by removing the lens with the camera still turned on while set to f/1.8).

You will only see these spots if the scene contains small point type light sources (distinct blur circles/bokeh). I don't know about disassembling that lens; but I suspect it is not worth the risk/cost.

Not the answer you're looking for? Browse other questions tagged dust or ask your own question.

17
Where is this dust located on my sensor?
3
Does lens focus affect the appearance of sensor dust?
2
Nikon D600: how to fix hundreds of photos with dust on them?
0
Speck on view finder or sensor
0
Dust visible on pictures with small aperture
1
Why doesn't the shutter close (like it does in mirror-up mode) when changing lenses to protect from dust?
1
Fungus or dust?
9
What are these pixel-level discolored specks? How can I fix it?
1
Why is there heavy dust and scratches only on the darker part of scanned color prints?