Why are War Photographers able to take pictures that seemingly violate the exposure rule?

A lot of historical war photographs I've seen are capable of recording the subject in sharp detail despite the subject being in blazingly fast motion, at the same time having little to no depth of field.

From what I've been taught, taking such a picture would need low shutter speed, high ISO, and a very small aperture. But this should have produced a lot of noise and grain, yet I cannot spot any on most war photographs.

The one underneath, for example, showed roughly 6 bullet traces, assume it's M1919 then the exposure time would be somewhere around 1/10 of a second. But the rest of the plane is crystal clear and sharp with no blurring at all: 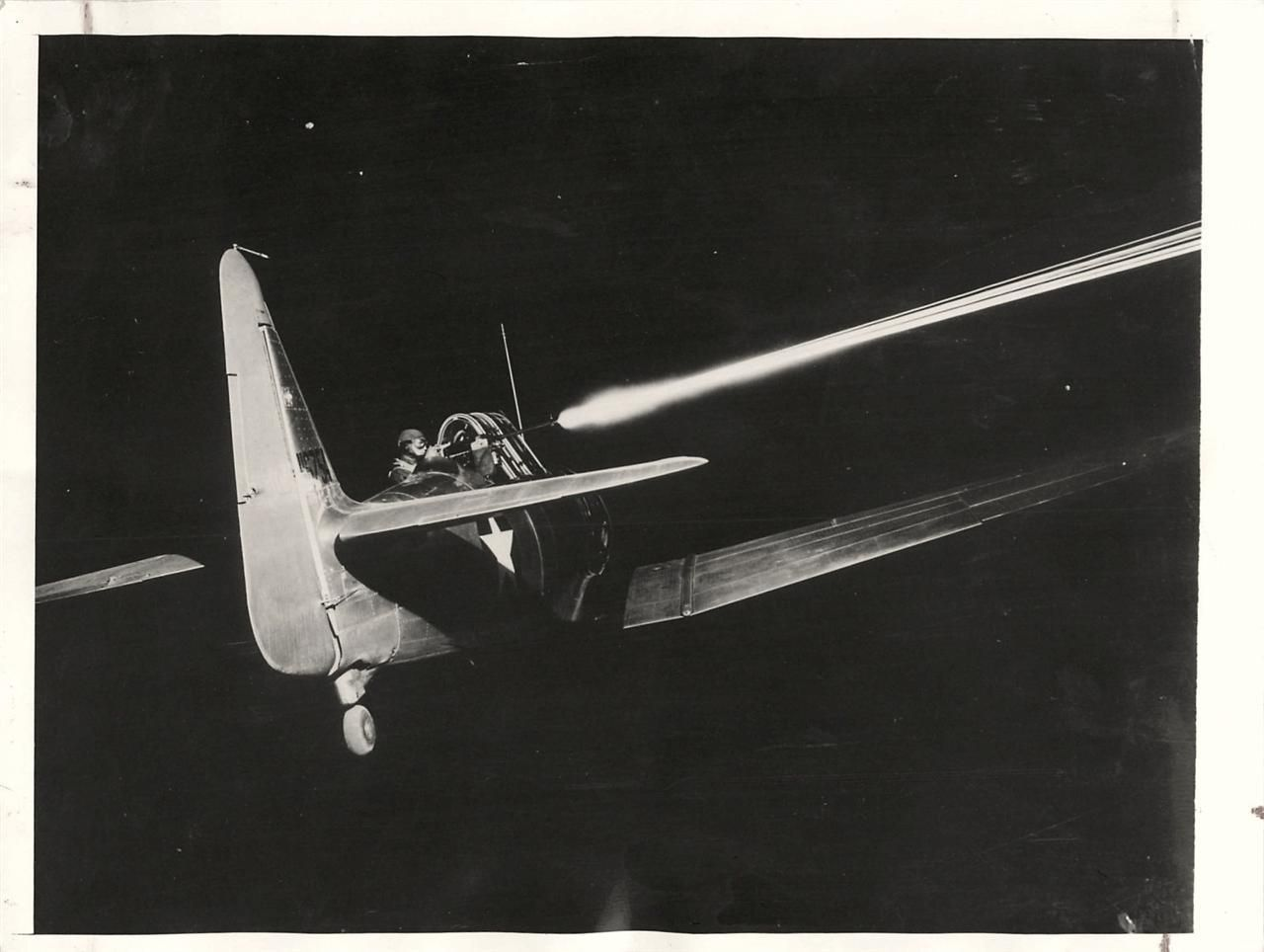 The following also shows very little motion blur, the carrier and aircraft are both clear and sharp: 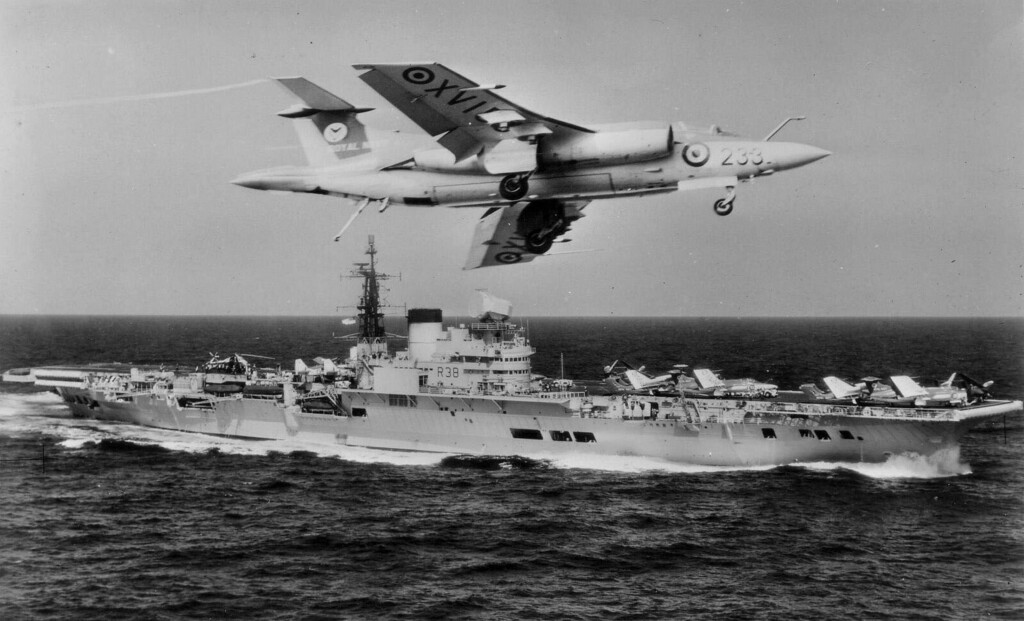 How did they manage to do this? Is that a camera thing or some magical technique?

First about depth-of-field: The two examples you posted, and many war pictures, are of objects at or near infinity (Latin: as far as the eye can see). The light waves from objects at infinity arrive as parallel rays. This occurs if the object is about 1000 focal lengths distance. Suppose you mount a 50mm lens, infinity is likely 50 X 1000 = 50,000mm = 164 feet. In other words, mount a 50mm, set focus to infinity, all objects 164 feet distant and further will be in critical focus.

Further, manually setting your camera’s focus at a distance called “hyperfocal” works best. This distance is about 1000 times the diameter of the iris (aperture). Suppose a 50mm camera set to f/8 is used. The diameter of the iris is 6.25mm. This is derived by dividing the focal length by the f-number. Multiply this diameter by 1000 = hyperfocal distance. In this case, 6,259mm = 20½ feet. Manually focus this camera, set to f/8 to 20 feet, the span of depth-of-field is one-half the hyperfocal to infinity. This hyperfocal distance is the magic distance used to pre-set the lens. Such a setting yields the maximum depth-of-field span that reached infinity.

For the first photo:

You just happened to pick a staged photo...

This is the image with text, note the artificial bright lighting coming from high above, near the cameras position?: 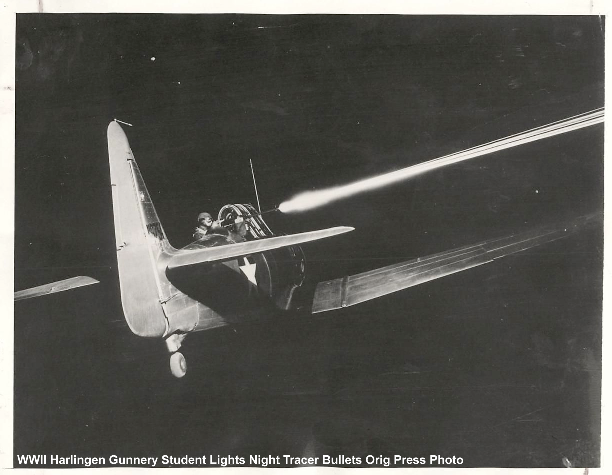 This is the aircraft with flexible gunnery training mount: 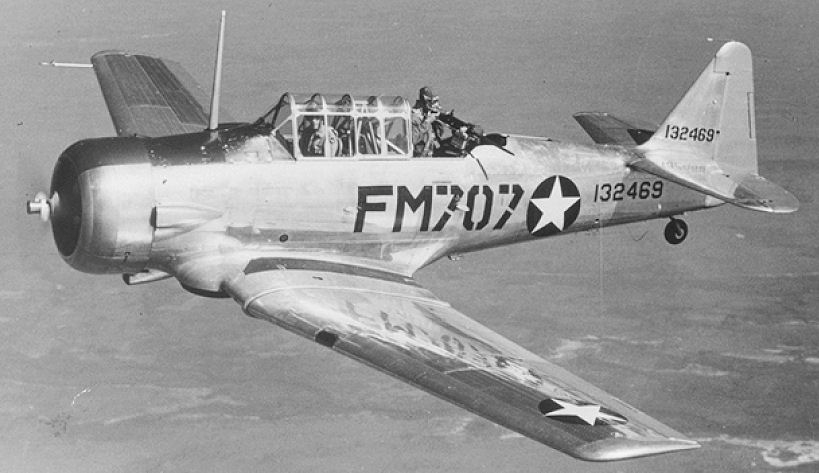 Here are other staged shots, showing off powered up aircraft firing tracer rounds (the landing gear was likely painted out as this was used for a published advertising campaign, the aircraft, a P-63 Kingcobra, was one of those based at Harlingen flexible gunnery school):

So really the camera was likely a 4x5 field camera based on the information regarding the photographer known to be at the location doing night shoots with tracer for publication.

In a staged situation then, a sharp and well exposed photograph is able to be produced without the same worries if it had been during an actual flight.

Note how some of the angles are incredibly dangerous if they were actually taken during flight, and how all control surfaces are neutral.

Harlingen Army Airfield opened in July 1941 and was used by the United States Army Air Forces (AAF) as a training base during World War II.

It was assigned to the AAF Gulf Coast Training Center as a flexible gunnery school.

Training was conducted both in the air and on the ground and used a variety of aircraft, including AT-6 Texans, B-34 Lexingtons, and P-63 Kingcobras.

For ground-based training, a number of facilities were available, including the moving target ranges and a number of gunnery simulators.

There were a number of photoshoots carried out at Harlingen showing the students going through their training. 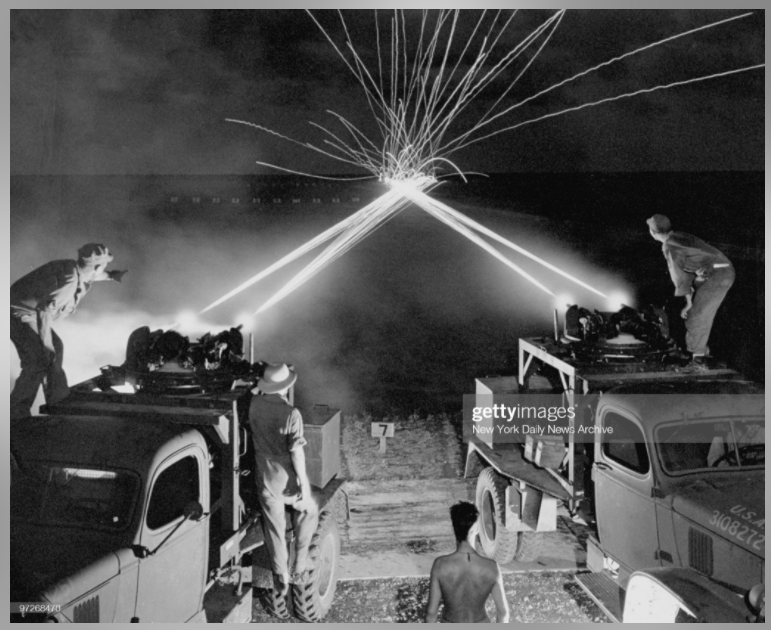 Note the sharpness despite the likely shutter speed?

He was known for using 4x5 field camera during this period in time, switching to 35mm rangefinder later in his career. He was also known for experimenting with lighting and flash photography.

The staged photoshoots, using the same AT-6 Texan as featured in the OP's photo (based at Harlingen flexible gunnery school), dated 1942-3, went on to be featured in publications such as:

The Harlingen Texas Army Gunnery School (HAGS) operated during WWII in south Texas. The book is designed more for families to let them know what the training is like at HAGS and how well the men are treated. A variety of planes were used at HAGS and the gunners were cross-trained to be radiomen or engineers. The gunners were trained to be "flexible gunners" which means they could move their barrels in any direction in which the enemy approaches.

Here are other shots from the shoots, shot around a AT-6 Texan and a B-34 Lexington, note the use of artificial lighting:

Blurb: The Men Behind the triggers of the Army Air Forces ……. Army Air Force Soldiers here are training to live in glass houses and still throw stuff more dangerous than stones. At this school in the near-tropical Rio Grande Valley, where a Gulf breeze mixes orange blossom scents with powder smells, soldiers learn to sit in plexiglass bomber blisters and keep would-be attackers at arm’s length while pilots and bombardiers do their jobs undisturbed. The brand of shooting taught here is known as “flexible gunnery.” That means the gunner swings his barrels around in any direction from which the enemy approaches. 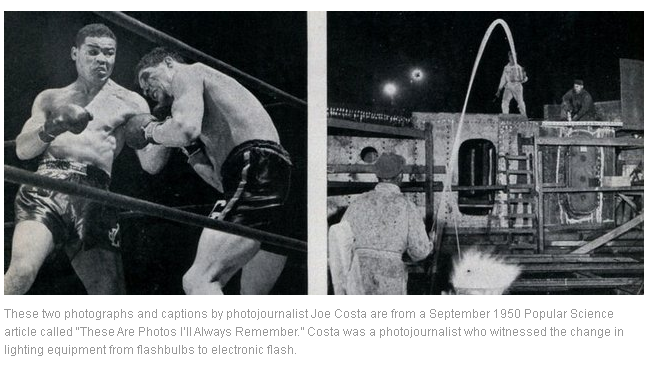 The image on the right is using similar exposure as the tracers images to get the arc. 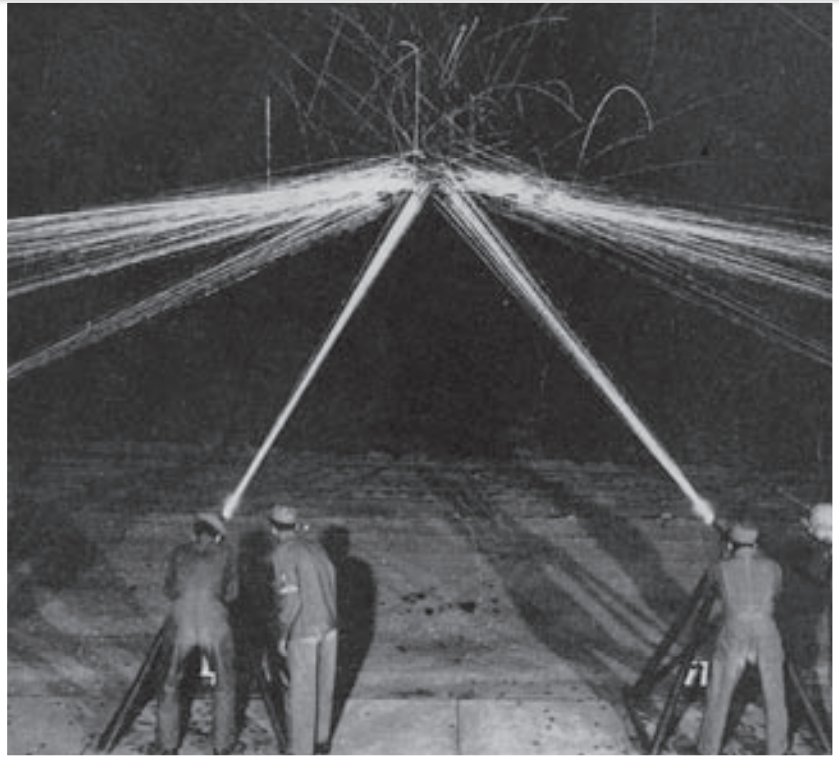 This was either Tyndall or Harlingen.

At the time it was rumored movie star Clark Gable was doing gunnery training at Harlingen when he was actually at Tyndall.

Bad picture reproduction but it seems Harlingen was the optimal place to shoot the shooters shooting tracers: 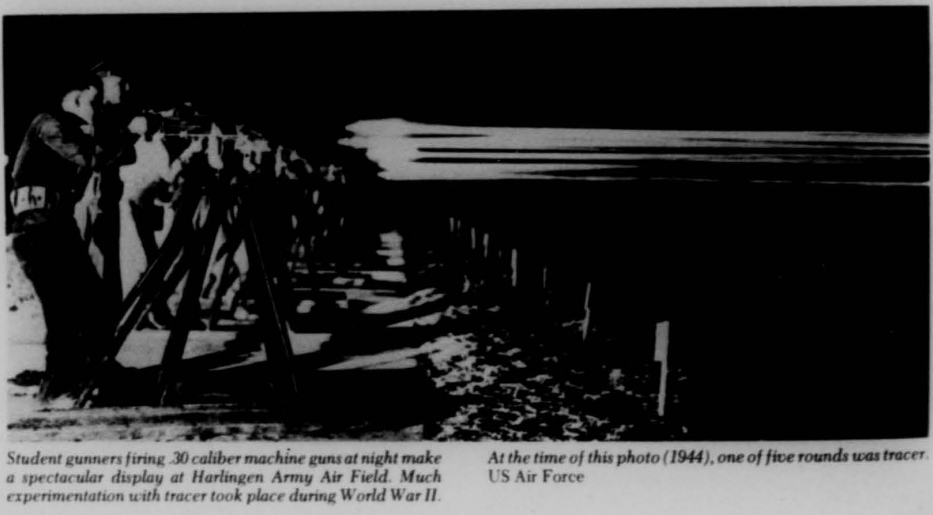 A lot of it was the choice of camera. The usual "press camera" of the 30's, 40's and 50's was a Speed Graphic or similar with a 4" by 5" focal plane. The enlargement required to make a print was much less than for 35 mm, so photographers could use faster film without having grain visible in the print. That, in turn, permitted faster shutter speeds, all other things being equal.

Not the answer you're looking for? Browse other questions tagged exposure depth-of-field motion-blur or ask your own question.

2
Why are my pictures blurry/soft?
26
Why are there limitations to the upper limit of exposure time in digital cameras?
0
How quick are you able to set the exposure on the Sony NEX-C3 (or other cameras like it)?
9
Why are exposure settings different while using different lenses under the same lighting conditions?
14
What exposure was used for successful pictures of the "blood moon"?
1
How did photographers get the exposure right back in the day with only full-stop increments?
0
Why is my image too bright when I take a 5 second exposure outdoors?
1
Are all prime lenses designed so that the same DoF scale applies at any focusing distance? If so, why?