Why is 16:9 aspect ratio rarely used in professional photography?

Sony uses a 16:9 (1.778) aspect ratio for still photos taken from its camcorders. As a guideline, panoramic photos commonly are 3:1, which is wider, while medium format are well-known to be half that at 3:2 (1.5) aspect ratio.

I've never come across 16:9 photographs in professional print or fine art. Why is this size so unusual?

Adding on to @Orbit's answer regarding area of an inscribed rectangle in a circle, the following graph shows the area of 4:3, 3:2, and 16:9 aspect ratios. 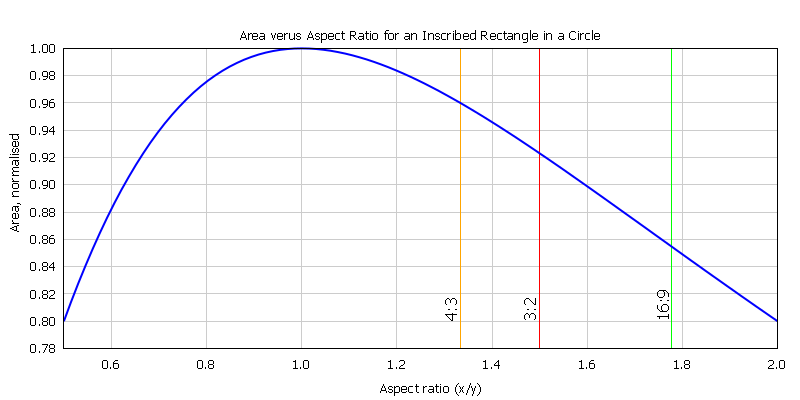 Nothing earth-shattering, but, you get about 10% better area utilization of the image circle using 4:3 versus 16:9.

I expect that this is mostly due to technical limitations. DatAperture wrote it very nicely on Reddit:

Lenses project circular images. To get the most resolution out of a lens, you should use a circular sensor. But those would be really wasteful to produce en masse (imagine how much you'd waste cutting circles out of a sensor wafer), so we have to use 4-sided polygons. Theoretically, a square would be the best way to use a maximum amount of that circle's light. But a square is weird; you'd have to crop like every image. So, 4:3 and 3:2 are the solution: not quite a square, but not widescreen 16:9 either. Maximum amount of surface area from the lens's image circle without being a square. You can always crop to 16:9 later, but if you crop a 4:3 out of a 16:9 size sensor, you've just lost a huge amount of usable pixels.

Besides this, many people don't like the format much and have trouble making a nice crop with it, but that can also be because they are not used to it. There is a thread on DPReview about this subject.

The 35mm camera evolved into an image size that is 24mm x 36mm. This format was chosen by the German camera maker E. Leitz. One of his engineers, Oskar Barnack designed a 35mm still camera in 1913. At that time, Thomas Edison was making movies using a 35mm wide film stock. This film has perforations along both edges to accommodate mechanical transport in the Cine (motion picture) camera and projector. By 1913 this film was plentiful. The Cine camera image was 18mm height 24mm wide. Leitz doubled the height to 36mm for the Lieca camera making the format 24mm height by 36mm length.

Consider that this film size is too tiny to be useful unless an enlargement is made. Now most films went to a professional photofinisher for developing and printing. It became standard practice to enlarge 35mm negatives using long rolls of 3 ½ wide paper. The result was a print size of 3 ½ X 5 1/4 inch. By the middle of the last century, 4 inch wide paper became popular thus the industry standard became a 4 x 6 inch print.

By the way, professional photographers, of this period, were mainly selling 8x10 inch portrait size prints. This size stems from the Dutch paper makers during the Industrial Revolution. Seems they automated paper making using machines that produced a web of paper the width of an operator’s outstretched arms. At that time the Dutch began to produce drawing paper 8x10 inch in tablets. This size was the most efficient cut-down of the web with reduced paper waste. The 8x10 sketch paper became most popular in England.

Meanwhile the TV industry evolved into “wide-screen” formats. The 16:9 TV format is here to stay, I think. I will bet that still cameras of future will begin using this format and it will become the "industry standard".

Aspect ratio can be anything if you're making your own cameras and coating your own plates. But if you use equipment manufactured by others, you're limited to whatever is actually made and sold. While you can crop to whatever aspect ratio you like, the full image will always be whatever is captured. Papers, frames, and other supplies are also available in standard sizes.

While there are cameras and papers that do not fit the most commonly used sizes, they hold a minority share until enough people switch. As you've noted, there's currently little market demand for manufacturers to change. So they don't.

Even if another format were to become more popular than 3:2 and 4:3, there is still pre-existing equipment that can continue to be used. There also are pre-existing images that would continue to dominate until enough new images are created.

Initially, manufacturers produced equipment and supplies that were incompatible with each other, but they eventually figured out that's a ludicrous way to compete. As time progressed, they naturally moved toward standard sizes. This has happened repeatedly with different technologies (paper, film, screens, sensors, etc).

What appears to have happened (according to Wikipedia) is someone cut down a standard Kodak 70mm film stock to make the 135 format for motion pictures. Motion picture film was run vertically with a 4:3 aspect ratio (± audio track, anamorphic, etc.). Then for still cameras, someone else put two 4:3 frames together and ran the film horizontally to create the 3:2 aspect ratio. This format became popular and resisted numerous attempts at change.

By the time digital came around, 4:3 was used in consumer cameras to (probably) match the size of monitors in common use at the time. For "pro" cameras, 3:2 was (probably) used because it's what photographers expect after a century of use. There is also lots of existing equipment (paper, lenses, shutters, etc) that could be reused in the transition. (Early DSLRs were modified still cameras.)

One thing that I want to point out is the APS film format (https://en.wikipedia.org/wiki/Advanced_Photo_System) did use a native 16:9 aspect ratio. From what I understand about the system the other two aspect ratios "C" (classic) and "P" (panoramic) work by cropping and storing some information in the magnetic portion of the film so that it can be cropped correctly when printed.

The native format "H" (High Definition) has a 16:9 aspect ratio.

Not the answer you're looking for? Browse other questions tagged landscape aspect-ratio pixel-size paper-size or ask your own question.

-4
Why are camcorders rarely used for static photography?