Hello fellow photographers! I'm hoping the group here can help me with a mystery. I recently bought a bulk loader for 35mm film from eBay. When it came, I noticed that it already had film in it. When I asked the seller, they said that they didn't have any information on where it came from. It doesn't look like any of the color or black and white film stocks I've ever seen. Unexposed film is tan/yellow on the back, and pink on the emulsion side. When left out in light, it turns to an olive green.

Since I could see no markings, I decided to attempt to develop a small roll of it with T-Max black and white developer. I have heard that you can do that with color film, you just won't get the color negatives you normally would with C-41, you'll get black and white images. The film developed, but strangely. You could definitely tell where it had been exposed to light when loading, because those areas were dark olive green and opaque. Where the film should have had images on it was a metallic green sheen on the emulsion side. No images. However, I did get some markings on the sprocket hole area:

triangle, square and another triangle.

I've tried several experiments, but none have yielded images. I thought I'd see what the group here knew before spending any further effort on this. 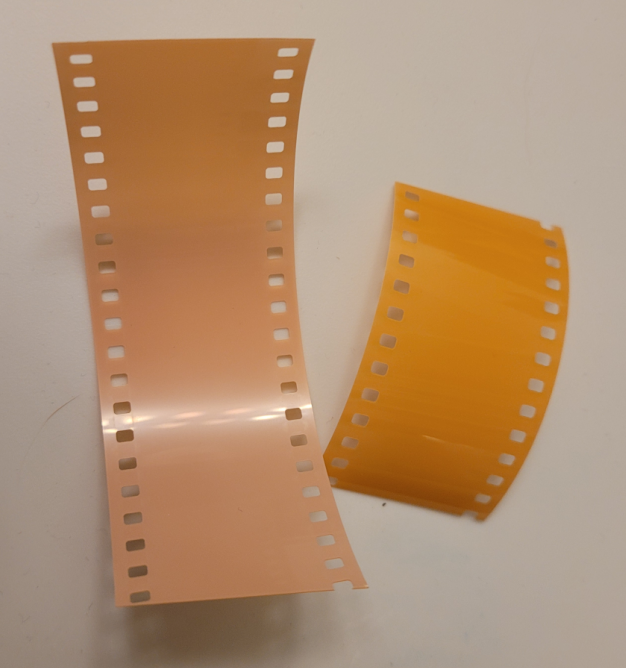 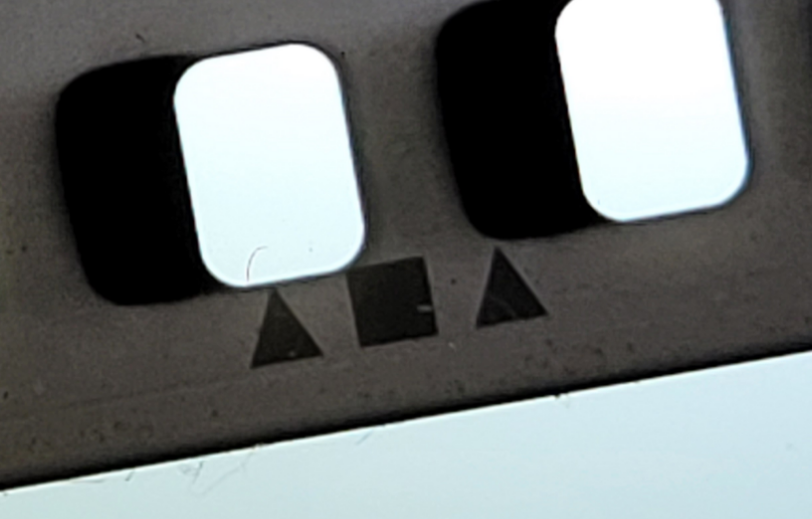 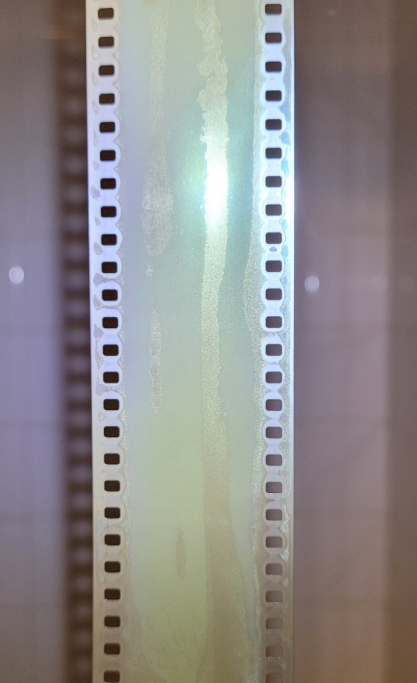 I think this is a Kodak Print Film. In the motion picture industry, camera film has lower contrast as compared to still photography. The camera film is processed making a color negative image. To make release prints for the theater, the developed camera film is printed by contact or optical projector onto a "print film". This is a negative color film of low contrast. When printed and processed, the yield is a positive color film suitable for projection in a theater.

Not the answer you're looking for? Browse other questions tagged film 35mm or ask your own question.

11
What happens if I redscale a B&W film?
7
Is this blue tint because of the film or the process?
2
Why do all my film color negatives come out transparent?
7
Is transparency film (E-6 process) likely to be produced in the future?
3
Does black and white film have any advantage over black and white effects in digital?
3
Why is the color mask of this 135 film dark blue-green?
2
How can I guess a film's specifications?
4
What is the advantage of making true black and white gelatin prints rather than color prints, from black and white film?
3
Can you replicate the look of orthochromatic film with a blue filter on panchromatic film?
4
Developed 35mm Film Green Tinted instead of Orange