How is uniform exposure achieved when using a leaf shutter?

When a rolling shutter activates it exposes the sensor through a slit (vertical/horizontal) - I can see why every bit of the sensor is exposed for the same amount of time. The "exposure slit" starts from the top and ends at the bottom.

Do digital cameras have to compensate for this? How did they compensate in the film era?

There are actually a variety of leaf shutter designs, so a single answer might not be entirely appropriate... but it seems apparent that you are talking about the in-lens aperture diaphragm type.

There is an error in your understanding. The central light path does not expose the central portion of the sensor/negative... e.g. using a small f-stop does not result in a small circular image in the middle of the image area. Instead, the image circle remains the same size and is limited by the lens barrel.

And aperture adjustment is really just changing the exposure by the stacking of multiple images upon the image plane (fewer/more). This type of leaf shutter does not cause mechanical vignetting... the only mechanical vignetting will occur at max apertures where images taken from the edge of the objective element are included; and those images include the edge of the lens barrel (which causes the shading; and is cured by stopping down).

Some other types of leaf shutters can cause mechanical/optical vignetting if they are outside of the lens assembly (more like a focal plane shutter or apodization filter).

Some lens designs can suffer from natural vignetting due to the inverse square law (cosine fourth law) where the light from far off-center portions of the scene have to converge at the center of a small diameter lens and then spread back out widely over a short distance in order to cover the image area... Basically, wide angle lenses with short flange distances are most susceptible. But it is not caused by, nor cured by, stopping down an aperture restriction.

The best way of approaching this might be by thinking of the aperture. A stopped down aperture does not only project light on the centre of film plane. Instead, the entire film plane is exposed more or less evenly (ignoring vignetting for the sake of the argument).

A leaf shutter acts in a similar way, in that it is very similarly shaped to an aperture and therefore does not obstruct light from reaching the edges of the film plane when the shutter is in a more closed state. 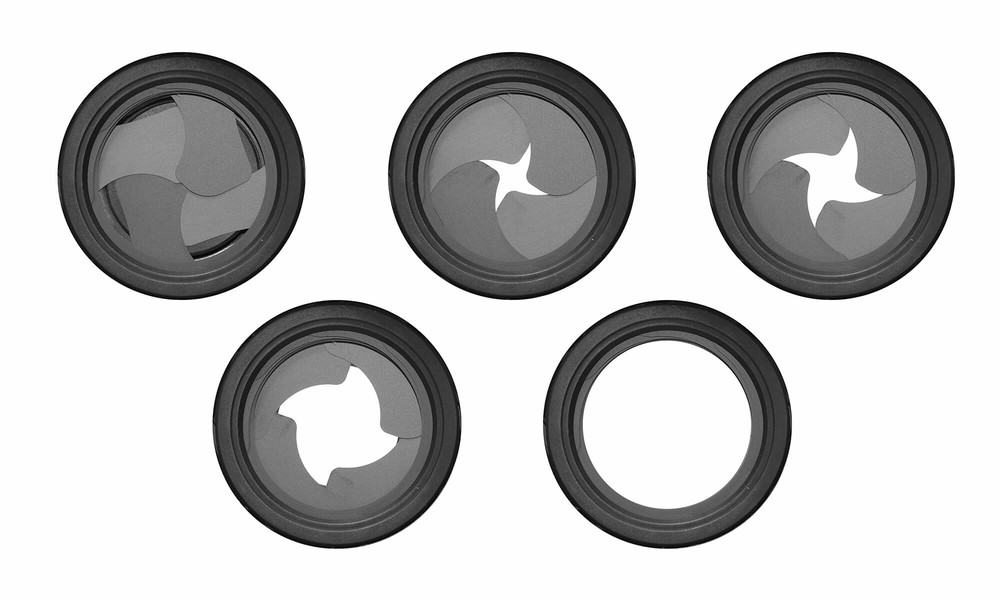 The shutter action is very quick, so for for moderate to slow shutter speeds any changes in DOF due to the shutter are negligible. However, for faster shutter speeds, DOF can be affected by the design of the leaf shutter [1, 2].

I am writing a totally ignorant answer, but let me just make some theoretical assumptions.

As normally a leaf shutter is located inside the lens, it has some distance to the focal plane. So, in the period on which it opens and closes, it works as a diaphragm. It still let the light fall into all the area of the focal plane.

Think about this. An f22 aperture still lets all the light fall into all the frame, the same as an f2.8. I think something similar is happening on a leaf shutter.

The difference with a curtain shutter is that this is located next to the focal plane, so, yes, this produces a very hard shadow when the contains move across the plane. When this movement is "tracked" when you are photographing a horizontally moving object, the result is a rolling shutter effect. But the shutter itself is not rolling, it is moving from top to bottom.

A real rolling shutter is the one used on a film cinema camera, where you need the shutter opening and closing, so you just put a rolling disc as a shutter.

On a digital camera, the rolling shutter effect is not due to the shutter, but how the lines of the sensor are scanned and transmitted. The camera can not process all the sensors at the same time, so it does line by line.

A raw processing software has some vignetting compensation. Some programs have specific information about lens-aperture combinations, so in the case that some vignetting is produced by the leaf shutter, can be compensated the same as any other type of vingetting.

The vignetting you are thinking about because of different exposure times at the periphery and the center of the leaf shutter when using very short exposure is there, but you are looking for it at the wrong place.

Because of the positioning of the leaf shutter, it acts as an aperture, so you get to see its effect where you can also see the shape of the aperture: in the bokeh and in the diffraction patterns usually determining sunburst shape.

Bokeh circles will not have quite the high-contrast edge focal plane shutters leave in place. As opposed to the sunburst stars from the aperture, however, the diffraction patterns from the leaf shutter get smeared out since the shutter edges change angle throughout its action. This smearing out from the leaf diffraction pattern is also responsible for another artifact at high leaf shutter speeds: a softer image (lower local contrast and softened edges).

The leaf shutter is in the spatial Fourier plane of the lens. The shape of the aperture with time as it opens and closes will expose different spatial frequencies for different times. The low frequency component is in the centre of the spatial Fourier plane and would get the greatest exposure than the high frequency component. This would result in a slightly less exposure of small details in the image and not usually be noticed.

Not the answer you're looking for? Browse other questions tagged shutter leaf-shutter or ask your own question.

5
When does the camera use the mechanical shutter and when does it use the electronic shutter?
2
Are there downsides to using a high shutter speed when it's not required?
14
What is the difference in purpose between a focal plane shutter and a leaf shutter on a camera?
8
How do I activate the shutter on a Schneider Kreuznach 135/3.5 Xenotar for Linhof?
8
What is a leaf shutter?
3
Leaf vs Focal plane shutter - Is there is difference in image captured?
1
Does leaf shutter work in HSS with Any strobe?
0
How do I make my a77 go back to a single shutter click when I press the shutter release?
1
Leaf Shutter Life Expectancy