What makes a strong wide-angle composition?

A simple, effective way to improve most compositions is to crop (or zoom) more tightly. Cut out the "distractions", and boom, powerful composition. I usually shoot with a slightly-long lens in the normal range, or with a short portrait telephoto, so this is basically automatic (whether I want it or not).

However, it's sometimes nice to have context. Sometimes, you want more of the story, and by leaving in the "distractions", you provide more of the truth, less selective tunnel vision.

So, I picked up the Pentax smc DA 15mm f/4 ED AL Limited , which I've been coveting for a while away. This is an "ultra-wide" lens even on my APS-C DSLR. But, it turns out to be, well, hard. It's not just a matter of making sure my shadow isn't in the frame; it's hard to get all of the elements to pull together in a way that add up to anything. 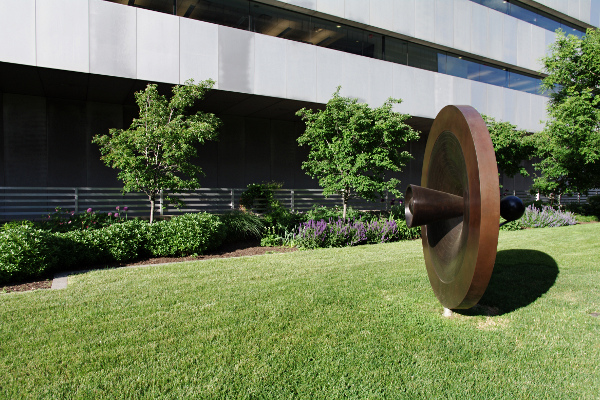 Photo by me, hereby released to the public domain on account of being boring

If you have something extreme like a Lensbaby Scout with Fisheye optic, it's a lot easier to be interesting: 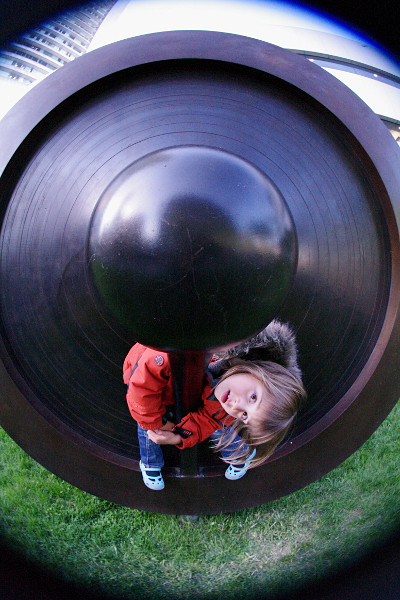 I mean, really, that's like shooting fish in a barrel. (Um, no pun intended.)

One can do similar (but a bit more tame) "extreme perspective" shots with the DA 15mm, since it has a close-focus working distance of about 9.5". However, that gets a little tired and gimmicky after a while. The whole point of adding to my lens lineup is to expand my horizons (both literally and figuratively), not to give me an occasional gimmick to pull out when I get bored.

The Lensbaby Fisheye was really entertaining to use, and the Scout is a gorgeous piece of hardware, but I couldn't really justify the price for its narrow (for me) application. The DA 15mm Limited gives me something that I'm hoping will be a more practical member of my camera bag, but it's clearly going to take some effort and practice.

So, how can I consistently make wide-angle photos that work, of a variety of subjects? I want to work towards pictures with context and story, not simply close-up images with perspective distortion.

The problem with "expanding horizons" is that by putting more things on a single picture, each single thing is smaller and gets less attention. The only way these shots could work would be by printing them huge so you can really look and explore into the details as well as get the overall impact.

You could try using the lens for group shots in tight space, but better don't show the results to people on edges - they end up looking like having spent a no-limits vacation in an all-you-can-eat buffet.

So yes, ultra-wide angles are hard to use. The few ways I know:

I think this is the way you mean by having "context and story". Ultra-wide angles exaggerate foreground, everything on the background (and even middle-ground) is made small. Therefore it is necessary to have

Indeed, such scenes are hard to find, which makes ultra-wide not so easy to use. Your subject can be on any of the planes, but foreground and background must be worthy of taking a picture whether they contain the subject or not.

If your ultra-wide lens can tilt, you can use it to bring focus plane on the ground, covering from an inch to infinity.

Ultra-wide angles can be used to photograph sky over a small strip of landscape. Although common for sky pictures, avoid polarizer with ultra-wide - the effect will be uneven over the large variation in angle. For the picture to work, obviously there should be something interesting in the sky, like clouds or a fleet of alien aircrafts [example needed].

Thom Hogan mentions this possibility in his "Lens Week Recap" - in some rare cases by standing further away with (ultra-)wide than you would with a normal lens, you remove depth relationships between objects. I haven't personally tried this approach, looks like I have a project for this weekend.

An ultra-wide angle lens can be used as a poor-mans-replacement for shift lens. For example, shoot architecture in portrait orientation keeping camera level, crop the unnecessary ground part later (or not, if you happen to like it). Example: 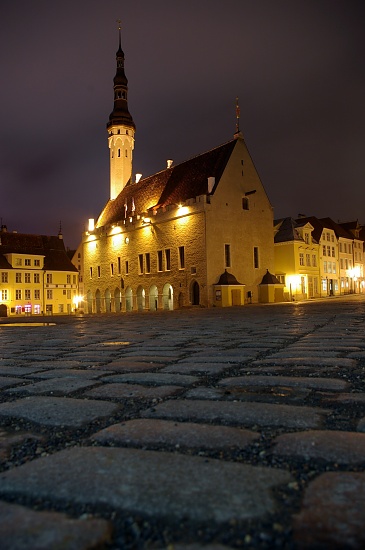 An ultra-wide will come handy when you finally decide to trade your small flat for something where you could actually fit a studio. It exaggerates the size of rooms in photos, which makes them more appealing in a real estate advertisement.

Outside photographing in cramped spaces (e.g. interiors), wide angle lenses are perhaps most interesting when they can provide some sense of depth that you couldn't get with a longer lens. (Since you would need to be further away from the motive, either due to narrower angle-of-view or poorer depth of field.)

For context, story and sense of depth you probably want more than one subject, with at least one in the foreground and one in the background. Standard composition rules-of-thumb, like "rule of thirds" (or any of the dozens of others), apply from there.

The wider the lens you use, the closer you probably should be to the nearest thing in your scene. And there should be a nearest thing in your scene! The classic landscape shot is something like: near flower, middle lake, far peak. How far do you think the photographer is from the flower? The lake? The peak? How about 1 foot, 10 feet, 1 mile+? Yep, there's almost a logarithmic nature to near/middle/far in most pro landscape shots. In most amateur shots, it's more like middle/far/far (10 feet, 100 yards, 1 mile). And the image feels "flatter" when hung on the wall in a frame because of that.

In many cases there will probably be two or more different elements, like "near flower, middle lake, far peak", and it turns into a question of how to compose with multiple elements.

But you can do that even with a single subject, I think Ken Rockwell's picture of an abandoned house is a nice example: The nearest corner of the house is near enough to fill half the frame, and you get the depth from the walls tapering off in the distance.

In his Death Valley picture the near ground fills most of the frame with the nearest ground just inches from the lens, while the horizon and far mountains provide distance. The composition here is something like "near ground, middle ground, far mountains", and it works because the "near ground" is near enough to be visually distinct from the "middle ground" - i.e. you can almost see individual salt particles. (The article is worth a read, by the way, and has some example pictures.)

A guide on composition for paintings suggests that an odd number of elements work better than an even number, that varying the space between different elements makes for a more interesting picture, that elements should be either clearly separated or clearly overlapping.

But this applies to composition in general. For wide angle lenses in particular, I think "the nearest thing in your scene should be very close and there should be something else much further off" is the most general principle.

Note: I'm not an expert on this topic, merely another student; this is my take thus far.

For me one of the best things about wide angle lenses is that they allow you to be right in the middle of action and still be able to capture something more than the details. 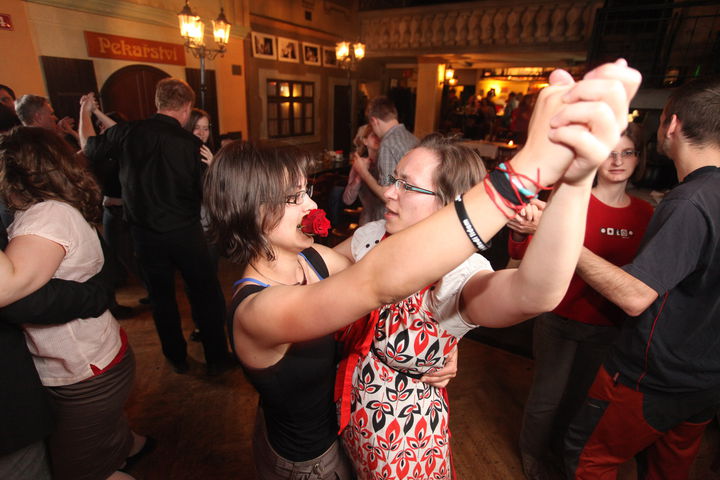 Even though this is not a particularly amazing work of art, I belive it would look not capture the atmosphere this well if I shot it from distance with a longer lens.

Not the answer you're looking for? Browse other questions tagged composition wide-angle ultra-wide or ask your own question.

44
What are common beginner mistakes in photography?
17
Which prime lens for Pentax APS-C?
23
How do I set up a home portrait studio area in zero space?
18
What is an ultra-wide lens?
14
Does an ultra-wide lens perform well in landscape photography?
6
How do I compose photos with prime lenses?
7
Are any ultra-wide angle digital point and shoot cameras made?
6
In what situations should I use which lenses while traveling to Paris?
5
How to compose a street story with an ultra wide angle lens?
4
What mm lens for distance shots?
See more linked questions