What are these focal lengths for Sigma Nikon Optimization Pro for 14-70mm F2.8 OS HSM A017?

In order to do so, I take photos at focal distances, marked by the app by red bars on the distance axis on the table, for each focal length and then make the adjustments in the app based on the results. See the attached screenshot.

These markers don't usually overlay clearly on a listed distance point. So, I've been taking the listed distance stops to the left and right of a marker, subtracting them, and adding this absolute value divided by 2 to the distance listed on the left of the marker, in order to get an estimate of the marker.

I think being off here would have significant impact as the scale doesn't appear to be linear. Is there a more accurate way to get the distances? Is this listed somewhere? I searched and couldn't find anything on this. 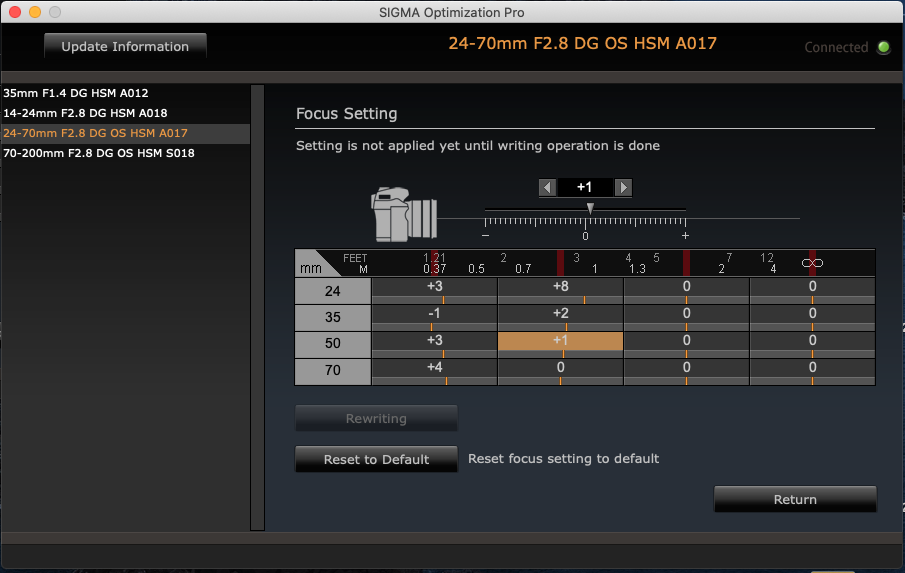 The distance scale is logarithmic. You need to take that into account, rather than assuming the distance between each set of adjacent numbers is linear. It would probably be close enough to use a rule of thumb that the halfway point in focus distance between two adjacent numbers on the left third of the matrix is two-thirds of the way between those numbers on the scale. Look at the position of 2, 3, and 4 feet, for example. The 3 sits about two-thirds of the way between the 2 and the 4. In the middle of the matrix, the "halfway distance" is increased to about three-quarters of the way along the scale. The 4 is about three-quarters of the way between the 3 and the 5. (But then that breaks down when using the metric markings! Argh.)

Since the scale shows both metric and English distances at different points along the scale, the first step I would take if needing to be so precise is to convert each metric measurement to English, and vice-versa, and add them to a screenshot of the scale using something like Paint if you're using Windows or whatever the Mac equivalent is if you're using a Mac.

Keep in mind that with zoom lenses, unless they are truly parfocal (Hint: Pretty much any non-cinema zoom lens or any cinema zoom lens costing less than $10K is not truly parfocal), distance scales can only be most accurate for a single focal length. I've always assumed the distance scales on AF zoom lenses made in the past thirty-plus years are for the focal length at half of the full rotation of the zoom ring between minimum and maximum focal length. On my Canon 24-70mm f/2.8, that is about 40-45mm. Even with prime lenses, though, distance scales on AF lenses that even have them can be notoriously inaccurate.

What is unknown: Should the lens be tested at actual focus distances measured from the camera to test target for each focus distance and focal length combination included in the matrix? Or should the lens be tested for each focal length setting in the matrix with the subject placed so the focus scale is at indicated distances matching the matrix adjustment points? Is there even enough difference to be able to tell the difference?

Worrying about precision on a scale finer than the range of shot-to-shot deviation for a series of several frames shot at the same focus distance and focal length is meaningless. Every lens with every camera body will have some shot-to-shot deviation when shooting the same subject from the same distance and the lens is refocused between each shot. There will also be variation when using different AF "points" with the same body, lens, focal length, and subject distance. It's been almost a decade since Roger Cicala wrote a series of blog entries called "Autofocus Reality", but the concepts still hold. His testing methodology usually samples at least ten examples of each camera body or lens (depending on which he is testing for shot-to-shot variation) and he averages/means the results as well as calculates the standard deviation of those results. Here are links to the entire series:

Personally, I only have one Sigma lens that is compatible with Sigma Optimization Pro. It's the 120-300mm f/2.8 DG OS HSM | Sports. It's a bit of an outlier since at widest zoom setting it still has a fairly narrow angle of view and doesn't get used much at closer distances.

I've found with that lens on the camera body I use it with¹ I have not needed to calibrate very precisely for different focal lengths and distances. I started at infinity (at 300mm because at longer distances I'm more likely to be using the maximum focal length) and MFD (at 120mm because at shorter distances I'm more likely to be using the minimum focal length) then interpolated the distances in between. I found the same numbers at each distance work well for my lens at all of the focal lengths. That does not mean this should be the case for other lens models, other examples of the same lens model, or even the same exact lens on a different camera body. 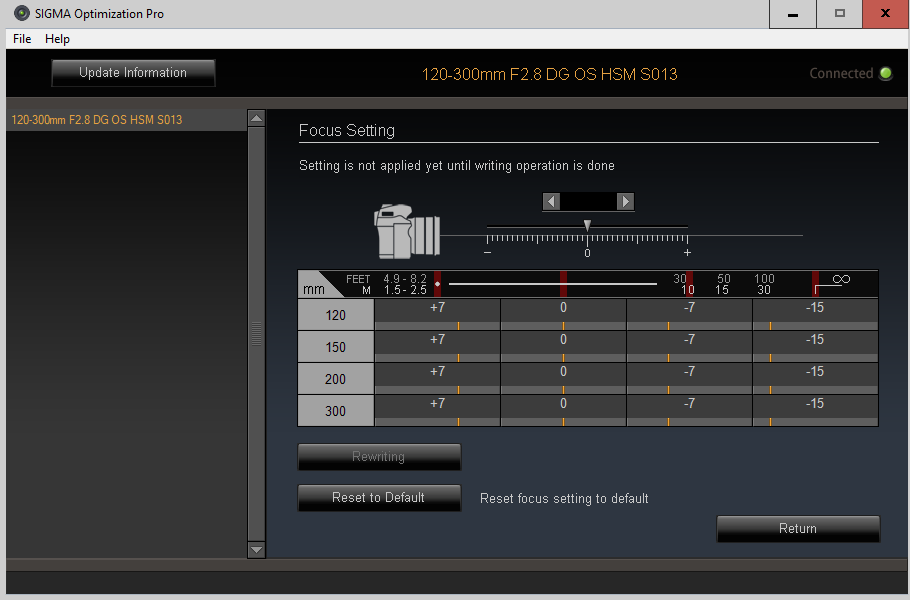 Of course, with such narrow angles of view I rarely shoot with subjects at less than 10 meters/30 feet. I did check MFD at each focal length² on the calibration matrix and my lens is spot on with the same adjustment for all of them. That doesn't mean your lens will be the same, but I would expect the numbers to move in the same direction (either increasing or decreasing) from top to bottom on the matrix. I'd also expect the numbers to move in a progressive sequence (either increasing or decreasing) from left to right on the matrix.

If I were getting numbers that seem to jump back and forth all over the place, I'd be wary that my testing methodology might be flawed. Keep in mind that the lens is going to interpolate values between each of the entries you make. In your image, it shows that for 24mm you've entered +3 at MFD and +8 at roughly 0.8m (2.6 ft). When the lens is focused at a subject around 0.57m (1.9 ft), which is roughly halfway between MFD and 0.8m (2.6 ft) on the logarithmic scale, one would expect the lens to use a correction of either +5 or +6, depending on which way it rounds the result that would be somewhere between those two integers. Or maybe it uses a non-integral value, such as +5.5, when interpolating intermediate values?

One should expect that as one moves from closer to further distances the numbers should trend more or less along a curve or slope, rather than look like a stock market index over the last month. The same is true as one moves from shorter to longer focus distances. The numbers should show a trend along a curve or slope, rather than the output from a seismograph during an earthquake.

Not the answer you're looking for? Browse other questions tagged lens nikon software color-management sigma or ask your own question.