The right side of the image has some sort of obvious light leak I'm unsure what is causing it, e.g. the lens, the camera etc. I have checked for leaks and I don't think I found any.
The camera is a Pentax k1000 and the lens is a sigma lens. 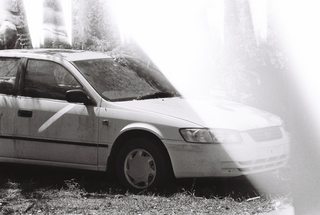 Procure a tiny flashlight that will stay on. Place it inside the camera and close it up. Take it to a closet that can be made light-tight. Take a stool with you because you will be in there for maybe 15 minutes. It takes that long for your eyes to dark adapt. While sitting in the dark, examine the camera from all angles. If the camera allows light to leak in, it will also allow light to leak out. This technique works, so don't foo-foo it.

It's not the lens, because the lens is on the other side of the shutter from the film. Any light leaking into the mirror box, whether from the lens or anywhere else on the front of the camera, will only illuminate the film for the (typically) split-second the shutter is open for each exposure.

Light leaks don't have to let much light in, because they leak continuously anytime the camera is exposed to light. Remember that the top right of the frame is on the lower left (as viewed from behind the camera) when the negative is inside the camera. So look at the seals around the back door on the lower left.

There is more light leaking shown in the top right of the picture. This is the bottom left of the camera because the negative is recorded upside down and reversed left to right.

On the Pentax K1000, the film door latches on the left.

I suspect the lower light seals and/or the large seal at the hinge.

Not that it makes much difference, just replace all the seals. It is a reasonable job to do yourself. K1000 light seals are available from Aki-ashi here.

Not the answer you're looking for? Browse other questions tagged 35mm slr light-leaks pentax-k1000 or ask your own question.

7
What is a good technique for reproducing "light leaks" in post production?
11
is there a real difference between "digital" and "film" lenses?
2
Pentax K1000 Hotshoe Broken
2
Is there a way to test an SLR's meter without a lens attached (or with a mismatching lens)?
2
What considerations should be made for choosing a manual film SLR for photography classes?
1
Possible cause of light leak in film SLR
26
Is this light stripe at the top of images from my DSLR a light leak?
3
Light leaks in RB67 film handling?
1
Light leaks all over the photos