Why does my ISO 1600 picture have a grainy background? 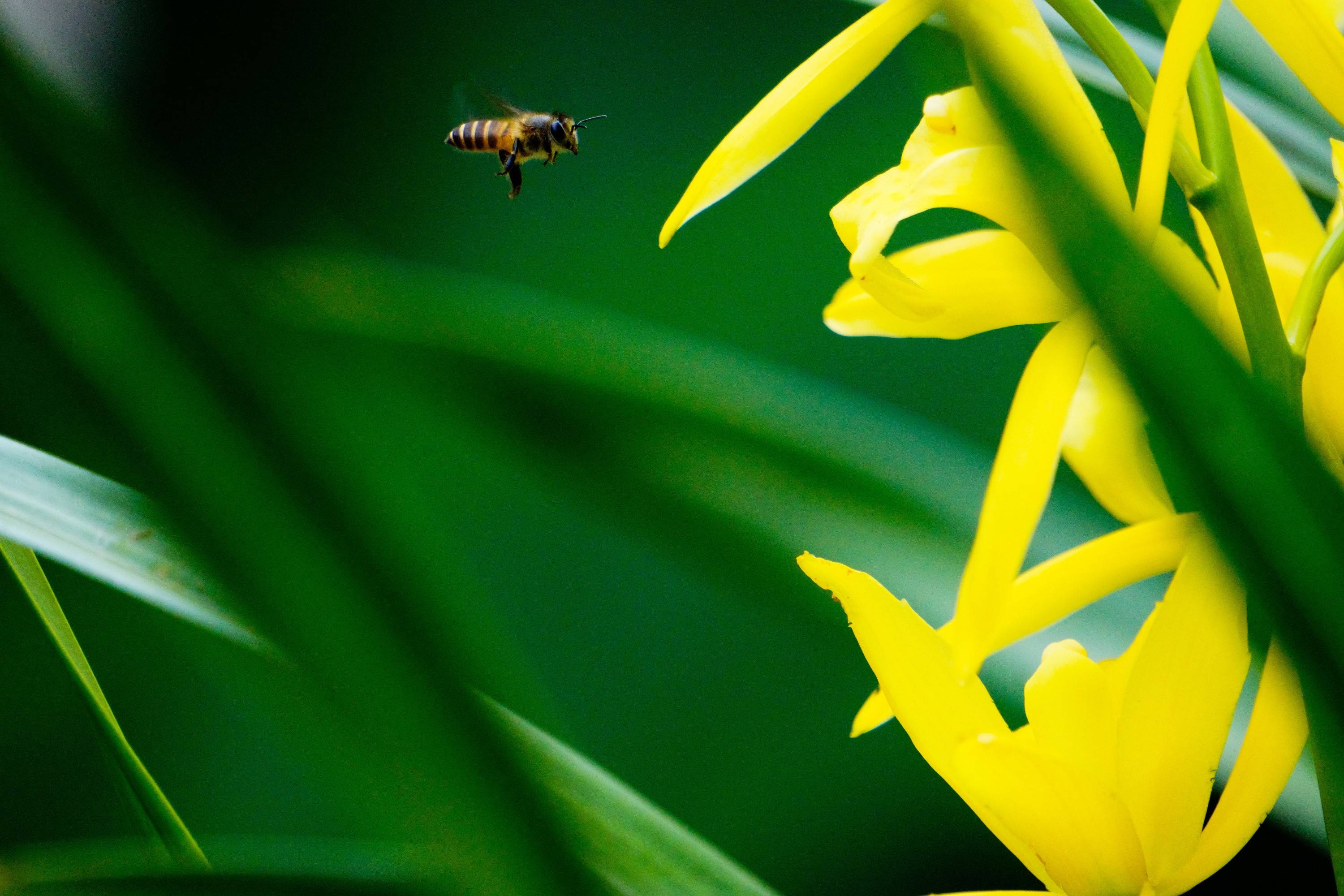 Why is it grainy in the background and how do I fix it?

why is it grainy in the background

You chose to limit the amount of light collected by the sensor to the point Poisson distribution noise has a noticeable effect.

Instead of shooting at ISO 1600, f/6.3, and 1/1000 you could probably have used something like ISO 400, f/4.5 , and 1/500. Your image would have been the same brightness, but you would have collected four times as much light and amplified both the signal and noise by one-fourth as much.

The image looks fine at normal display sizes. The noise is only apparent under high magnification.

For a given intensity of light there is also a given amount of noise; and the noise component is equal to √(photons/time/area). So, with more light intensity/availability there is also more noise; but also a better SNR (signal to noise ratio), which results in a less noisy image (because the noise is buried under the signal).

Many think that the ISO causes the noise, but it doesn't... using a higher ISO either reduces the noise (increases recorded SNR), or it makes little/no difference (ISO invariant cameras). In fact, you can record an image at a higher ISO in bright/strong light and end up with less noise than recording the same image in weaker light at a lower ISO (or no-worse at least).

There are many ways to fix it after the fact; but like most problems, it's best to avoid it in the first place if possible; and that means collecting more photons (light).

Using ISO1600 tells the camera to aim for 1/16th of the exposure it would need for a full quality image. If you want to get better results, you need more light (and then can lower the ISO). More light can be gotten by a wider aperture (at this scale and a good autofocus, you should certainly be able to go wider one or two stops while still having at least the bee reasonably sharp front to back), by slower shutter speed (for a fast-moving object, not necessarily a good idea) or by using extra light. A reflector may be good for one stop. Flashes can be tricky at 1/1000s but there may be workable options for them as well.

I'll leave it to people smarter than me for exactly why it happens, but fixing it in post is often not too difficult.

In Photoshop, there are noise reduction routines, this from CameraRAW… 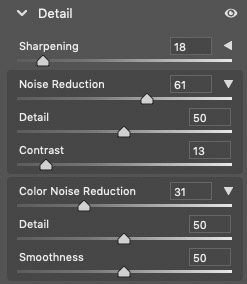 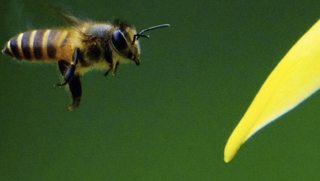 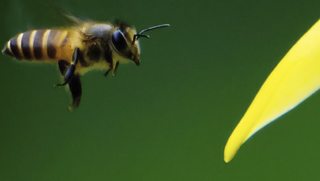 Or from OnOne NoNoise AI, just at default settings 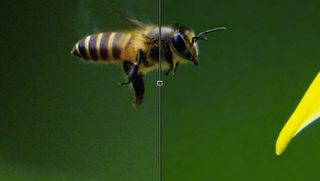 I will attempt to explain how the grain you are seeing is a product of the settings of your shot, and try to keep it simple without photography jargon or math.

Your photo has the settings f6.3, 1/1000, ISO 1600, 210mm. And I think those are decent settings for the image you took. A bee moves fast so 1/1000 is fast enough to get a crisp enough image of its body (but not fast enough to capture the wings). Your aperture is a relatively small 6.3, and that is probably because the zoom lens you used has a max aperture of 6.3 when zoomed in to 210mm, but also good for ensuring the bee is in focus. It appears that the photo was taken in the shade or on a cloudy day, and so the aperture and shutter settings appear to be at the most optimal possible for letting the most light in, and under the natural lighting conditions they can't be changed to let any more light in (aperture probably can't get bigger on your zoom lens at 210mm (zoom lenses with bigger apertures are very expensive due to the quality of optics required), and the shutter can't be any slower or the bee would be blurry) and so the ISO has to be turned up to 1600 to expose the image optimally. Your camera is a 2014 model I presume, and 1600 ISO is a higher (higher is a relative term, read the next paragraph for explanation) ISO setting for that generation of cameras, and so the grain primarily comes from that setting.

The ISO setting in digital cameras changes the voltage on the camera sensor, making each pixel more sensitive to light. Noise is caused by a pixel being tripped by some photons, but not enough photons for the camera to resolve the correct color or brightness for that pixel. Each pixel is like a mouse trap. The lower the ISO the more firm the trap is set, like a mouse really has to bump it good for it to trigger. As the ISO increases the trap is more loosely set, like just walking by it and causing the ground to shake may cause it to trigger, not catching a mouse, or in the case of a pixel, not catching the most accurate color or luminosity value.

Each year, camera sensor technology, and the image rendering software in cameras, make noise less and less apparent, that is shooting at 1600 ISO on a 2012 camera has significantly more noise than shooting on a 2021 camera at 1600 ISO. So the noise to ISO relationship is very dependent on the camera (sensor) you are using.

You will always have noise with current digital cameras, how much is dependent on the exposure settings of the camera and the amount of light in the scene. If you can't get a bigger aperture, and you can't slow your shutter speed any more for the shot you are trying to get, than all you can do is increase ISO. You have to learn your camera and image editing software to figure out how much you can raise the ISO for different types of shots. I usually use the lowest ISO possible for the required exposure (often I under expose a bit because I don't want to increase the ISO/noise, but instead edit the photo afterwards back to desired exposure resulting in the desired amount of light in the photo but less noise due to the lower ISO setting (I usually do this with my older noisier cameras)), that is I set the aperture and shutter first. But really noise is only a problem if it affects the fidelity of the shot or your desired artistic vision of your shot.

Back to your shot... it is about as good as you can get in terms of image fidelity with that camera set up. "Removing" noise from that shot in particular would be very easy for software, as it is all one color in the background and out of focus. Look up noise reduction software tools. They are available in most photo editors. Knowing how to edit noise will allow you envision shots that you normally couldn't take, like astro shots. And sometimes a shot is impossible to do with natural lighting conditions and camera noise, but you can invent your own source of light (like a flash setup) to take images that people have never seen before!

The best thing to do is to learn your camera. Try taking the same photo with two settings locked (say aperture and shutter), and change only one of them from high to low (say ISO). You will be able to learn how each setting works independently.

P.S. if you record photos in JPEG mode, the camera will denoise your photos a bit as part of rendering the JPEGs. This is not to suggest that you record in JPEG, but to explain that if you record in RAW format you have to render the photo yourself and denoise it and adjust color with a photo editor. RAW formats (.arw for Sony) give you the most control of the final image and how denoising is applied. Personally I use Adobe Lightroom Classic, but also there is RawTherapee, which is a decent way to enter into the raw editing realm for free.

Not the answer you're looking for? Browse other questions tagged noise or ask your own question.

6
When is high ISO noise not noticeable?
21
What is so special about ISO 1600?
5
Why photos taken with flash appear to have less noise?
3
Why do my photos appear grainy when taken at the widest aperture?
2
Why am I getting noise with D3200 even at ISO 200?
3
Why my shot in winter has noise as I have an ISO of 200?
10
Why would using higher ISO and faster shutter speed yield more noise than using lower ISO and slower shutter speed?
8
How to avoid the grainy background in sunset picture?
0
D800 suffering excessive noise at low ISOs
6
Why does a non-linear relationship exist between noise level (of dark frame) and ISO setting