Does colour mixing work with other sets of three colours?

Fellow photographers and I were discussing how to create a positive colour image by overlaying three film BW negatives/positives that were shot using the trichrome process, using three colour filters in between the stacked photos.

We concluded that to make this work, one has to do three things:

This is a case of subtractive colour mixing, which is based on cyan, magenta, and yellow, which combined at 100% 'strength' filter out all light.

Looking at the colour wheel below, one can see that CMY and RGB both are opposing colours, all equally far apart. This has me wondering: why is CMY specifically used for subtractive colour mixing? Won't red, green, and blue not result in black just as much, since they are in equal relative positions on the colour wheel? And what about other colours, such as pink, light blue, and light green? In fact, would CMY work in an additive setting? 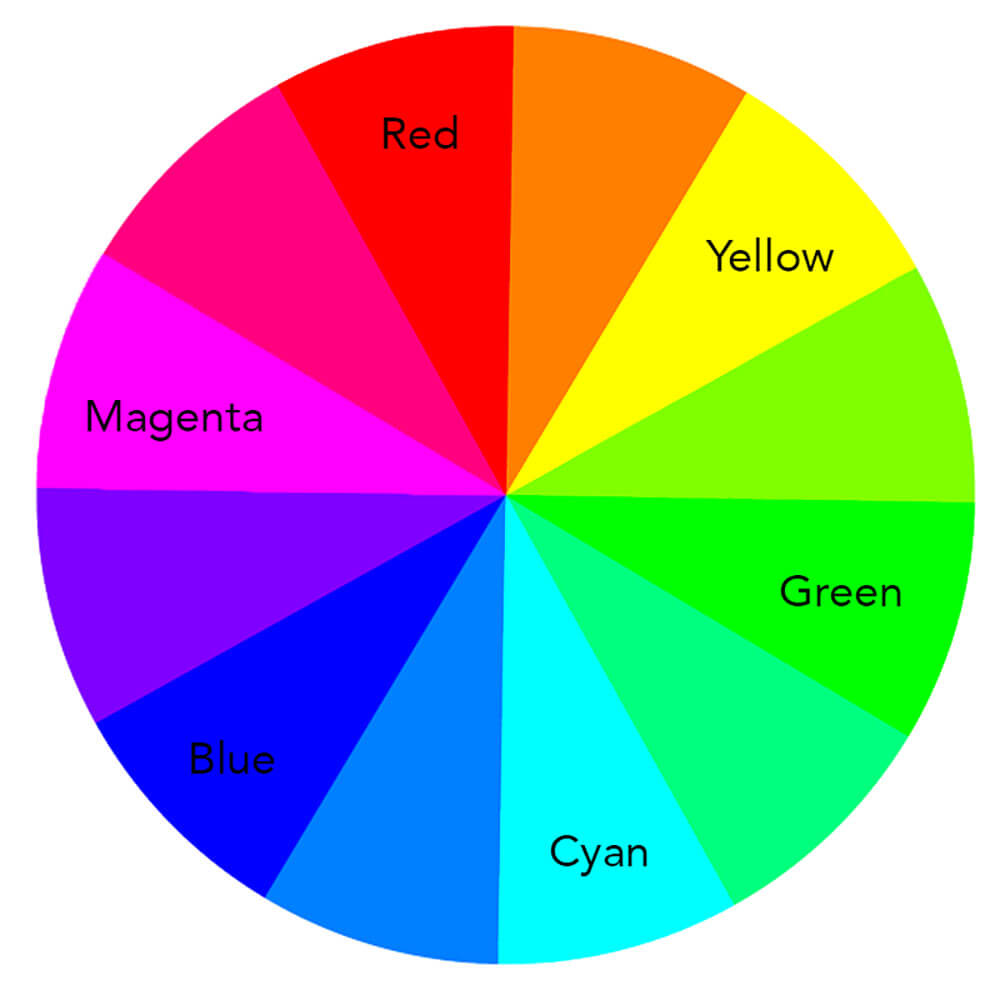 You have your causality backwards. RGB doesn't work because they're opposing colors on the wheel, the wheel is organized as it is because the eyes work in RGB.

The way we see colors is an additive process. You can create (almost1) any hue by adding different quantities of red, green, and blue light. There are no other colors of light that have that property.

The reason CMY is used in printing is that those colors absorb one of the 3 primaries while reflecting the other 2. Cyan absorbs Red, Magenta absorbs Green, and Yellow absorbs Blue. To print something that's red, you combine magenta and yellow so that all the green and blue light hitting it gets absorbed, leaving only the red.

1 You can't get all the hues because the response of the eye as defined by the CIE color space is not perfectly triangular; some hues can only be seen with pure monochromatic light at specific frequencies. RGB gets close enough for practical use though.

At the time of taking the images you would want to use a combination of RGB filters; e.g. R+G rejection filters (or a blue colored absorptive type filter) allowing B to pass.

Then at the time of enlargement/printing you would need to use the corresponding RGB filter for that image; e.g. B for the R+G filtered negative... this is all additive color because it all has to do with projecting/recording light.

And the color paper has RGB sensitive layers which are CMY in color correspondingly (i.e. the cyan layer is sensitive to red light)... The final output is in subtractive color because the positive reflects/transmits the colors it does not absorb/subtract.

The other colors (i.e. magenta) would work at the additive stage because it is essentially a combination of the R+B positive colors (typically labeled as violet in the visible light spectrum).

At any stage involving projecting light you are using additive color (RGB). Additive colors add up to white, so a white (or colored) light falling on a reflective surface (white wall) determines the color.

Subtractive colors (CMY) have to do with reflecting light, and they add up to black. What makes something green is that it absorbs all of the other colors. I.e. it is a mix of cyan and yellow (subtracting red/blue) and reflects the remaining additive color in the light (green). I.e. you cannot mix the processes... light is always additive, and surfaces are always subtractive.

Lippmann made a super transparent film emulsion. This glass plate emulsion was backed by a mirror. The exposing light traversed the film emulsion exposing the plate. The exposing light hit the mirror and again exposed the film from the rear. When this processed plate was illuminated, light traversed and found its way to an observer’s eye. This light was forced to filter through a maze of black and white silver (images). Only those frequencies that originally exposed the film could pass. A full color picture resulted.

The idea is to present to the viewer a faithful reproduction by controlling the intensity of the three additive primaries the observer will see. To accomplish we need dye or pigment that will filter (control) how much red, green, and blue light is seen.

The biggest problem is finding dye or pigments that have the “right” color (not easy). The yellow dye is excellent, the magenta is fair, the cyan dye is poor. For prints on paper, the three should overlap to form black. The black we get is not deep enough, we must add a fourth black dye called a “kicker” to get the a good black. For photographic film and photographic paper, we never got this right; we are forced to live with a poor black.

By the way, if you superimpose the three negatives or three positives, the three silver images will be super dense i.e. opaque. You must bleach away the images and then substitute transparent dye. Plus - Stacked CMY = black i.e. no light will make it through the sandwich. The cyan filter blocks red, the magenta filter blocks green, the yellow filter blocks blue. Stacking CMY blocks all three of the light primary colors. This will not work!

Not the answer you're looking for? Browse other questions tagged color printing rgb cmyk color-theory or ask your own question.

56
Why are Red, Green, and Blue the primary colors of light?
21
Why don't mainstream sensors use CYM filters instead of RGB?

5
How to figure out whether the colours in a photo are warm or cool, and how does that matter?
21
Why don't mainstream sensors use CYM filters instead of RGB?
3
What's the best method to change colours in a photo to another specific color?
11
What would happen if a camera used entirely different primary colors?
43
Why don't cameras offer more than 3 colour channels? (Or do they?)
0
Is this color-correction explanation of images from a lunar lander gobbledegook?
2
Can an RGB channel be shifted to increase color gamut into the violet range?
2
Why does light-colored skin look different in black and white versus digitally desaturated versions of color originals
0
How to correct colour from flash (shooting instant colour photograms)