How can I identify this Nikon film camera I came across in dads estate?

I'm cleaning out my dads house and came across this analog Nikon camera in an old case.
The case looks worn but the camera and attachments look OK.
I have no idea if this is an all-in-one camera or if there a different attachments on it like filters and lenses?

I do not know anything about cameras, I've been trying to do research but don't know where to start. The serial number seems to be: FE 3252512.

Here are some photos of the camera and its accessories (click for larger images): 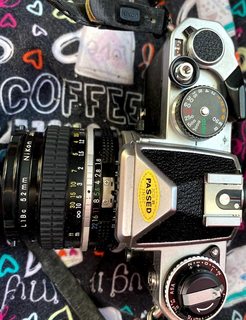 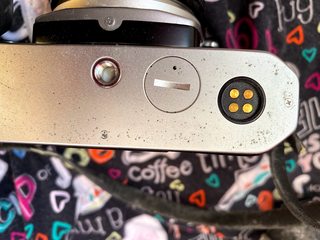 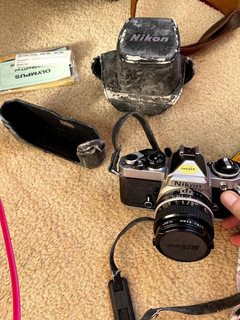 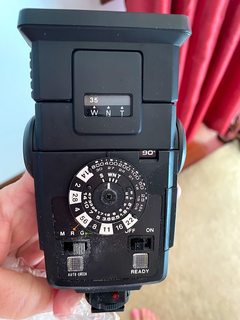 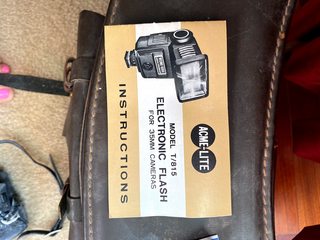 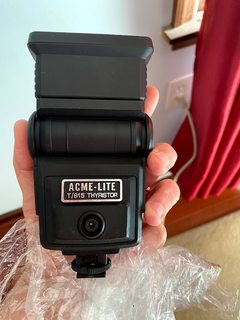 I believe the camera body is a Nikon FE. Firstly, the serial number starts with "FE". =) But also, comparing an FM to an FE (see Nikon FM/FE/FA, the first picture), yours looks like the FE.

The lens has a removable filter mounted on the front, a 52mm (diameter) L1BC Sky filter. Basically, it's color-correcting UV filter, meant to slightly "warm up" or prevent a blue color cast when using daylight film on subjects in the shade (thanks to MichaelC for the clarification). There's nothing super special about the filter, those types (or the A-versions, which had a more subdued effect) were pretty commonly used on film cameras when shooting outdoors. For more about these types of filters, see:

I can't tell which lens is on the camera. It looks like it's probably a 50mm f/1.8 AI-S lens, a common and standard Nikon lens at the time. Take off the lens cap, and look at the front of the lens. It might help to unscrew the UV filter. It should say something like "NIKKOR 50mm 1:1.8" followed by a serial number, and then "Nikon" further around.

This seems to be a Nikon FE 35mm SLR manual focus camera from 1978.

Not sure about the lens, but it seems to be a Nikkor 50mm lens with an L1Bc filter attached to it.

12
Which filter is the more generally useful: Skylight 1A or Skylight 1B?
11
What is the difference between UV and Skylight filters?
6
What is a Nikon "LlBc" screw-on lens filter?

12
Which Nikon lenses for family photography?
6
Camera recommendation for existing Nikon lenses
1
How well will a Canon 580EX II flash work on my Nikon D5000?
4
Overexposed shots on a sunny day with Auto settings?
4
Is a Nikon FG good enough for art school?
2
Versatile professional digital camera options
0
My DSLR's autofocus doesn't work after I dropped it — how can I narrow down the problem?
7
Dust on Sensor After Many Cleanings DSLR
0
Why is my Nikon D5500 unable to lock focus while using Live View but works fine when using the ViewFinder?