Why can I see through this astronaut on the Apollo 11 footage?

I’m not sure if this is the correct place to put this but I’d assume it’s a photography thing.

In this video When Aldrin is climbing down the ladder of the lander I can see the horizon through him. Why is this?

I’d also like to add that this is not related to moon landing deniers just my own curiosity about how this happens.:) 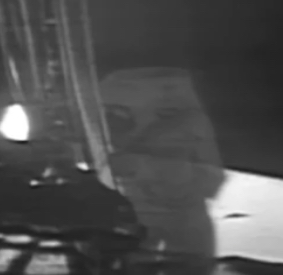 The exterior camera on the LEM was basically a miniaturized television camera, all based on state of the art late 60's video technology.

A television camera looking at the lunar surface in full daylight without even the benefit of an atmosphere to diffuse the harsh light will be extremely susceptible to all the foibles of the video camera tubes of the era.

I will attempt to explain my very layperson's understanding of how this ghostly afterimage of bright objects works, but the details of the electronics involved would be a better subject over on the Electrical Engineering board.

Based on what research I've been able to do, the early Vidicon tubes were particularly desirable for television because, though their signal output was low, their signal to noise ratio was also very high so they could be amplified and could therefore operate indoors very well. The downside being that anything that interfered with the signal at the source would also be amplified and show up on the output image.

One cause of this signal interference is heat buildup from bright lights hitting the imaging surface. This heat increases the electrical conductivity of that area of the imaging surface, essentially amplifying the output in that area slightly and causing an afterimage. Letting this go on for a long time can result in damage to the electrical properties and cause burn in on the image.

The camera spent between 17 and 18 minutes between the time Mr. Armstrong descended the ladder until after the famous descent photo was taken and Mr. Aldrin this video takes place. This is more than enough time staring at the lunar surface to build up enough heat for a strong afterimage. Once something blocked the excess light (like, for example, a giant space suit) the surface is able to cool and the afterimage slowly fades away.

To get down to the mechanics of how these challenging conditions could enable you to "see through" the astronaut, I think what is happening is this. In a TV camera of that era, the light effectively created an image of electrical charge (or some change in electrical properties) in the imaging surface, and that change was read off by a scanning electron beam. Normally, the electrical changes revert back to zero between each scan, but with such high contrast that was not happening. So a leftover image of the lunar background was slowly fading from the camera tube as Buzz (I said Neil at first but was corrected) stepped down the ladder, creating a double-exposure effect.

The TV cameras of that era were of the vacuum tube type. Artifacts of various types degraded the images they generated. To name a few – ghosting, smearing, burn-in, comet tails, luma trails both negative and postitive and blooming. What you are seeing is a trail of a scan of a bright highlight that is generating a trail. All this was common to TV images of that period.

11
Where can I get 4x5″, 5x7″, or 8x10″ color sheet film (or other hard-to-find exotic film) processed?
12
What are these lines through my images (on the negatives and the prints)?
0
How can I see how many pictures I've taken with a Diana F+?
5
Why am I getting vertical black bands across my negatives and how can I prevent this?
1
What is this camera / Can I develop the film?
13
Can 35 mm film which went through a washing machine still be developed?
2
I’ve just gotten my film back and it’s come out with all different colours through the image
1
why did my film come out like this?
2
What is the cause of this very grey film base?
2
Why did my 35mm scans come out with this white grain?