How (the heck) did NASA photographer Joel Kowsky take this amazing photograph of the International Space Station transiting the Sun?

The NASA Image Feature Space Station Transits the Sun shows seven shadows of the ISS transiting the face of the Sun. In order to discuss the technical aspects of the process I've cropped bits of the photo and show them below. The 5.4 MB JPEG image is available in the link.

How as all this accomplished? What went into the planning, location and shutter timing to make all of this work so nicely?

There are a few things that go into this.

You'll need to determine when & where a visible pass will take place.

When the Sun/Moon is high in the sky the passes can be very short (less than a second). When it is near Rise/Set (low on the horizon in either the East or West) they can take a little longer (perhaps a couple of seconds).

You can use a website such as Transit-Finder.com to locate a visible pass near you. It will need your geographic location and a date range (it will only predict passes within the next 30 days) and a distance that you'd be willing to travel (it defaults to 80km). It will search for any visible passes of either the Sun or Moon anywhere in the search radius in that time period and show results.

For example, here's a prediction showing a Solar Transit: 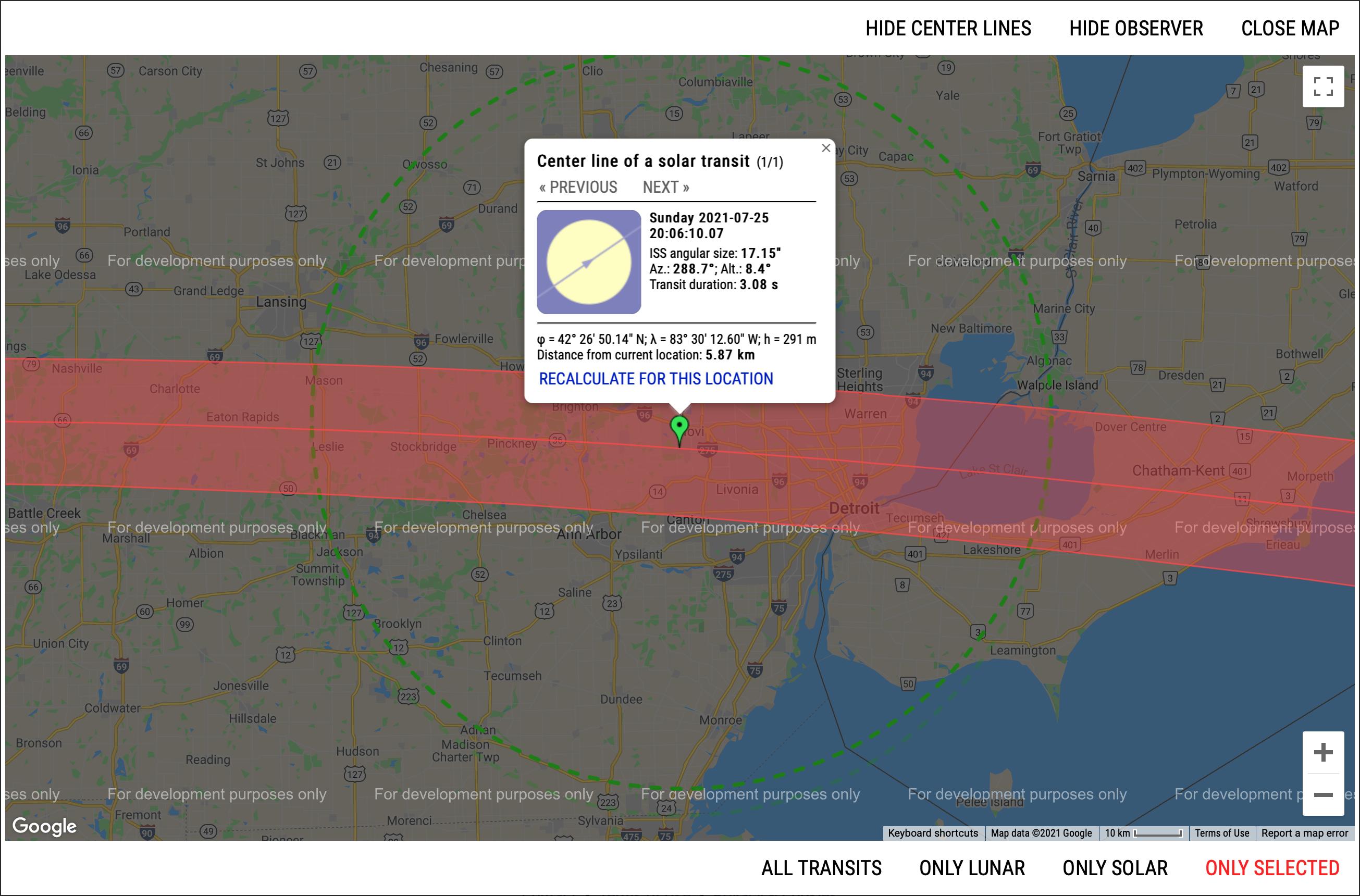 The pass would be visible from any location within the red shaded band. Locations near the centerline would see the ISS transit through the middle of the Sun/Moon so generally closer to the centerline is better.

From here, zoom the map to find a suitable location to setup ... such as a public park, etc. Click the map at that location and it should re-update the ISS pass with accurate time (down to the fraction of a second) for that location.

If you are doing a solar transit, you will need a safe solar filter. There are quite a few vendors that make these and you'll tend to find them available at online stores that sell astronomy equipment. DO NOT look directly at the Sun without a solar filter.

I use a special "finder" for the Sun ... it is basically two disks separated by a few inches. The one in front has a tiny hole in the center and the one in back has a target. The shaft of light shines through the hole and you center it on the target ... so you can align to the Sun without having to look at the Sun with your eyes.

My setup is as follows: 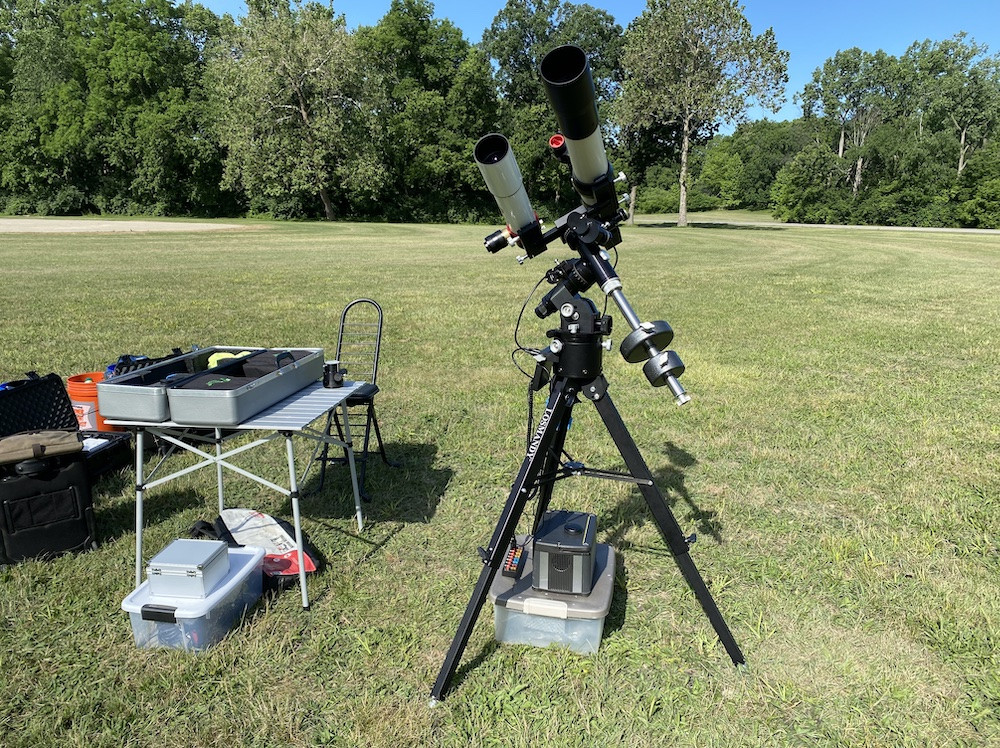 You'll want to consider that the both the Sun and the Moon have an angular width of approximately 1/2° (the Sun varies slightly throughout the year because Earth's orbit isn't a perfect circle... we are sometimes slightly closer or slightly farther and this changes the apparent size just a tiny amount. Also the Moon's orbit is also elliptical and varies slightly from Apogee to Perigee (by about 10%).

So consider the true field of view of your telescope or camera lens and camera combination.

I'm using a Losmandy GM8 telescope mount (this is a German Equatorial Mount) with a side-by-side mounting saddle that can accommodate two optical tubes on the same mount. This is a motorized tracking mount. I had previously aligned it and have it tracking the Sun.

Only the telescope on the left (shorter optical tube) was used for the image capture. This is a Lunt 80mm Hydrogen alpha solar telescope. This telescope is specifically designed to observe and image the Sun in the Hydrogen alpha emission band. It is not a general purpose telescope. It blocks all wavelengths of light except the Hydrogen alpha band (656.28nm) which allows for observation/imaging of the Sun's chromosphere. (BTW, this scope is actually a "double stack" meaning it has two tuning etalons to allow for extremely narrow bandpass at the Hydrogen alpha wavelength ... but full-disclosure... I had already finished imaging and was taking things down when my friend reminded me that I forgot to take a photo of the setup.)

The telescope on the right is a TeleVue NP101is. This is a 101mm aperture with a 540mm focal length at f/5.4. I used this scope to visually observe the pass (no camera on this scope). This scope was equipped with a Lunt White Light "Herschel Wedge" (a device that allows safe solar viewing with a diagonal "wedge" mounted at the back of the scope. The caveat is that this device can only safely be used on 4" (roughly 100mm aperture) or smaller aperture scopes.

The camera I used was a ZWO ASI174MM-Cool. This camera is no longer in production, however they do still make the ASI174MM (non-cooled). It's the identical camera without the cooling system (the cooling system is nice for very long night-time exposures as it reduces noise associated with sensor heat.) This is the monochrome version of the camera and it uses a Sony IMX174 imaging sensor. Color imaging isn't necessary when using a narrow solar telescope (since the scope only allows one wavelength so it's a monochrome scope.)

The main feature of this particular camera is that it has a global shutter (most digital cameras use rolling shutters) and this allows for very fast frame rates of just over 128fps at 12-bit depth or 164.5fps at 10-bit depth.

My partner in the astronomy club used an 8" Meade LX200 (2000mm focal length) but he used a .7x focal reducer ... bringing it down to about 1400mm. He also used a Canon EOS 1D X Mk II. The telescope had a white-light solar filter on it. If I recall correctly, the Canon 1D X II can burst at about 14 frames per second.

A camera with an APS-C size sensor would nicely frame the Sun/Moon at about 1500mm focal length.

The ISS flies at roughly 250 miles above the Earth (the orbital altitude changes slightly) and orbits the Earth about every 90 minutes.

It's velocity is roughly 25,000 feet PER SECOND (just about 5 miles PER SECOND).

I mention this because that means if you use a 1/1000th second exposure, the ISS will move roughly 25 feet WHILE your shutter is open. This makes it harder to get a crisp image (atmospheric seeing conditions may also make it hard to get a crisp image).

The shorter your shutter speed, the better.

It is better if you can do fast bursts rather than video but you'll need to time the bursts to avoid your camera buffer filling ... resulting in a substantial reduction in the burst speed (and you may miss the transit).

I tested my camera to make sure the camera, USB 3, and laptop (with SSD) would keep up with the frame rate and recorded 90 seconds.

On the first time (I failed), I did much shorter capture time and the camera stopped capture frames just before the ISS passed. So I visually saw it fly across the Sun in my 2nd scope but my camera had already stopped recording ... this because the orbit changed by just a few seconds and it was enough. On my second time I used a much longer capture window so that even if the orbit did change by several seconds I would still capture the pass.

Use an accurate clock to time the moment of capture. This is even more critical if you're going to be doing a fast burst of frames and don't want to overfill the camera buffer ... reducing the burst speed.

You can see the pass here on YouTube. The actual transit time was 1.1 second but this video slows it down to 8 seconds.

Not the answer you're looking for? Browse other questions tagged astrophotography timelapse physics time or ask your own question.

12
How were these Astronomy Photographer of the Year images produced?
14
How can they take pictures of the Milky Way?
8
What special equipment is needed to photograph the sun?
16
What causes and how can I avoid this moiré pattern in a composite night sky photograph?
6
How do I choose a lens to photograph the Milky Way?
7
Why did this photo of the Milky Way turn out badly?
2
How to take a picture at the same time everyday?
1
How can I reduce the storage space for unprocessed timelapses?