While cleaning up I found an old tripod that I nog longer use because at some point the head broke off. However, it seems very nuch like a new head can be attached to it. I'm no photography hardware expert though so I do not know what kind of tripod head should fit on it, and since the tripod is very cheap it doesn't show a brand or build name. The attached image shows the top of the tripod. Can anyone tell me whether this is some sort of standard type that can have a separate head attached to it, and if so, what kind of head? Thanks so much! 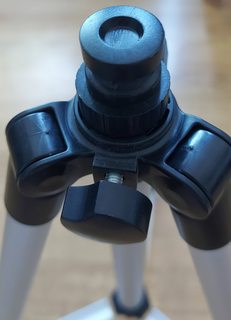 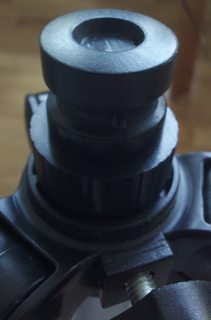 It looks like half of the head that broke off is still attached to the tripod. Is there a way to release the parts sticking up from the flat base to which the three legs are attached or a flat base at the top of an extendable center column if the tripod has one?

There are several possibilities regarding how the part that remains is attached to the center column.

There may be one, two, or three set screws on the bottom of the flat base that will need to be loosened in order to twist the partial head off the 3/8" screw that would be holding it on. Typically these are very small countersunk screws with a hex shaped depression in the middle for a properly sized Allen wrench to fit into which are called grub screws. 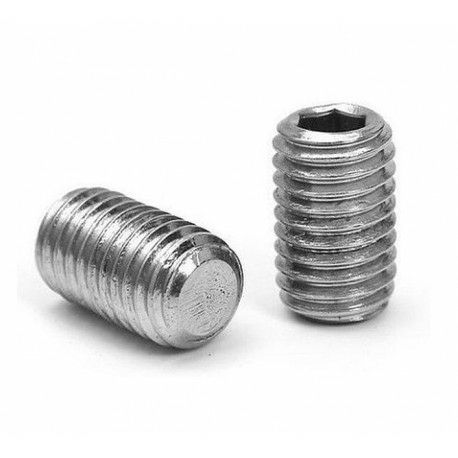 A few tripods use grub screws with slotted heads. 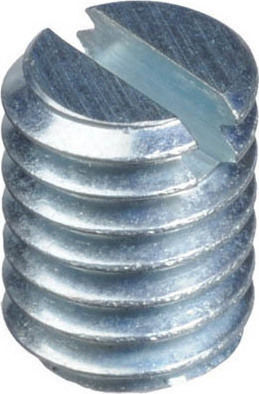 Again, these things are near microscopic in size. They're nowhere near as large as they look in the above pictures.

Note: You don't need to totally remove the grub screws from the tripod base, just back them off enough for the head to twist off. They can be a pain to get seated if you back them all the way until they fall out. Be sure they're backed off so that the tips are not protruding through the top of the base before attaching another head. Once you've got another head attached, then tighten the grub screws back in to lock the head in place.

Here's an example from a random tripod viewed looking up from underneath. 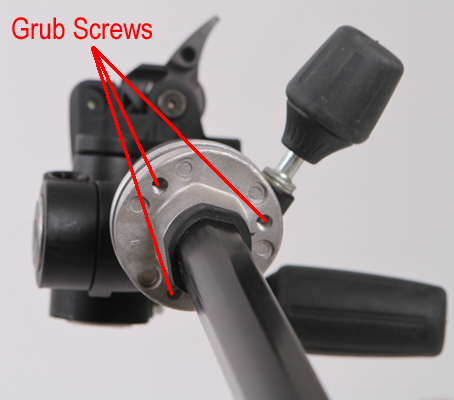 For more about how to detach a head from a tripod with grub screws, please see:

How can I remove the ballhead from my Manfrotto tripod?

¹If you get the partial head off and find there's a 1/4" screw instead of 3/8" screw protruding from the middle of the flat platform, you'll either need to use a head that has a 1/4" female hole on the bottom (rare) or use a 1/4" to 3/8" insert (very common) between the 1/4" male screw and the 3/8" female hole found on the underside of most tripod heads. Screw the insert into the bottom of the head fairly tight, then attach the head with the insert inside it to the tripod and twist it down until it's snug. Then tighten the grub screws (if any) from underneath to lock the head in place. 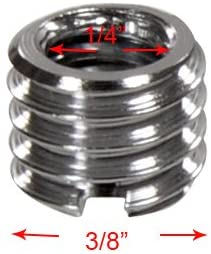 As shown it is not meant to receive a standard tripod head. These usually require a 3/8" screw on the tripod (1/4" screw for some).

Maybe the part you show is screwed on a 3/8" screw and can be removed?

I have a tripod here in work that's very similar on top. It was used for scientific kit, but was made for, I believe, a TV camera (many years ago I worked with the people who built the science kit that went on top). Mine is very heavy. I can't see a brand on it.

On the one here, this interface can't be removed; it's bonded into the centre column. It does, with the right parts on top, provide a nice panning interface, hence the built-in spirit level on the one here.

To use it for a camera you have a couple of options:

* If you're definitely only going to use it with cheap light cameras, you could 3d-print an adaptor to take a suitable bolt, but forget about that idea for anything good.

It is not a current standard.

The tripod is broken.

Salvage whatever is useful, then go ahead and throw it away…or recycle it. ;)

2
How can I remove the ballhead from my Manfrotto tripod?

5
How to smoothen a tripod's head movement?
2
Which tripod plates are compatible with the Nikon D7000?
9
Co-linear dual tripod mount for huge lenses
8
Pistol grip vs ball head
1
Is a 50mm-wide arca-mount a standard?
5
A fine-tuneable tripod head for my Gitzo tripod
1
Is the screw for attaching tripod heads to tripods standardized?
4
Bolt size for Velbon tilt head?