I've got an RF 50mm f/1.2 L lens for my R system. I've recently been playing with an F-1, and picked up the FD 50mm f/1.2 L lens. Obviously some of the different size is the autofocus and other camera communication through the RF mount, but a lot seems to be the very different optical formulas.

So, what does the formula of the RF lens do that the FD lens doesn't?

[Edit] Yes, I understand (as I said above) that the optical formulas are very different. Reading the question "what is the difference?" as "convince me that there is a difference" is something I suppose I should have expected from the internet.

To try to be even more precise: yes, I believe that the computer-aided formulas likely attenuate the Seidel aberrations and chromatic aberration even more precisely. Improved manufacturing techniques probably also reduce copy-to-copy variance. But in practical terms, what differences would someone expect between the images produced by a randomly-selected FD 50mm f/1.2L and a randomly-selected RF 50mm f/1.2L? Something significant enough to be obvious outside of test charts? Autofocus aside, are there situations where the RF would blow the FD out of the water, and if so which are they?

For what it's worth, I'll be doing some real-world comparisons for myself as soon as it's not stupidly hot even at midnight here; I'm just trying to learn more about how to understand what I see when I do.

They're two totally different designs that just happen to be the same (nominal) focal length and apertures.

The New FD 50mm f/1.2 L debuted in 1980 with 8 elements in 6 groups. As with all FD lenses, it was manual focus. It was very similar, but not optically identical, to the older FD 55mm f/1.2 from 1971. Both are based on double Gauss¹ designs that have been around for over a century. 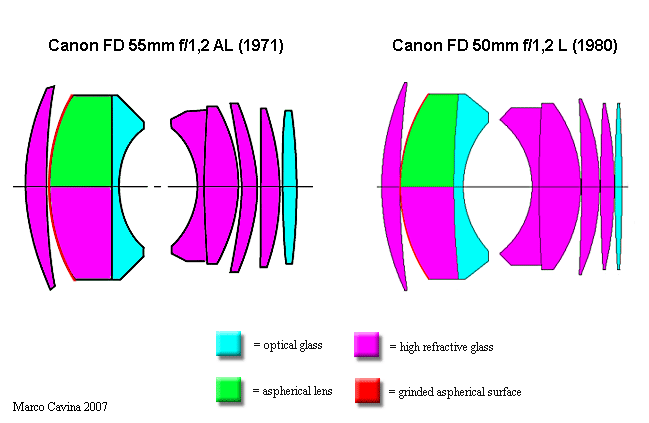 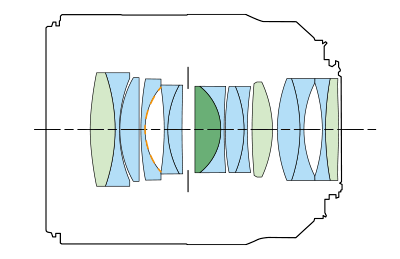 Comparing an FD 50mm f/1.2 L and an RF 50mm f/1.2 is like comparing the differences between a 1980 Corvette with a manual five-speed transmission and the 2022 Corvette Z06 with an automated transmission controlled by a very sophisticated computer that is scheduled to debut this fall.

They're both made by the Chevrolet Division of General Motors.
They're both named "Corvette".
They both have four tires, two doors, and two seats.

The newer model will perform better at the metrics which cars are usually measured: acceleration from 0-60 mph, max g-force on a skid pad, time to 1/4 mile distance, top speed, etc.

On the other hand, some folks may prefer the aesthetics or driving experience of the older model.

It can be much the same with lenses. Newer ones usually have a design optimized to perform well doing flat test chart reproduction, even with the aperture wide open, because that is what the majority of buyers in the lens market these days seems to be obsessed with. But optimizing a lens to do flat field reproduction can mean making it less optimal for other specific tasks. All of that flat field correction, for instance, can make the characteristics of out of focus areas "harsh" or "busy". This is not a desired quality for a lens used for certain types of portraiture.

[Update based on additions made to the question]

Pretty much the full gamut of aberration correction with two such radically different designs. The older design is basically a modified double Gauss¹ design that has been around since the early 1900s and used in a wide variety of lenses in the 50mm focal length range.

All of the classic optical aberrations appear to be far more heavily corrected in the newer design, as they are in most recent 50mm prime lenses.

Something significant enough to be obvious outside of test charts?

Absolutely. Test charts only measure acutance when imaging a flat two-dimensional target that is parallel to the camera's imaging plane. When taking photos of the three-dimensional world, all of the same design decisions that result in higher performance for flat field reproduction also affect how things in front of and behind the focus distance will be rendered, and not always in a way that is considered a positive by many experienced photographers.

Autofocus aside, are there situations where the RF would blow the FD out of the water, and if so which are they?

Taking photos of flat test charts that are parallel to the camera's imaging plane. That's where the newer designs really excel versus the simpler, older double Gauss¹ designs. That's what the current market seems to be obsessed with, and any lens that isn't optimized to do well on flat test chart tests won't sell very well among those who always have to have the newest / greatest / sharpest lenses. These types of buyers seem to be a higher and higher percentage of the total market for lenses as the interchangeable lens camera market continues to contract in the wake of both the Smartphone revolution and the collapse of photojournalism and photography-for-hire in general as full-time professions.

What photos of test charts don't tell anyone is how things like highly corrected, moderately corrected, or uncorrected field curvature affects the out of focus areas. Extensive correction for field curvature, and to a lesser extent spherical aberration, tend to make out of focus areas look less smooth than lenses with less or no correction. Objects with details in the background and foreground can appear harsh or busy.

Looking at other tests, such as those done by lensrentals.com founder Roger Cicala in the two articles at the links below, can give hints about how a lens renders a three-dimensional scene. Sometimes, so can looking at the lens' block diagram.

If a lens excels at flat test chart imaging, then it will also be well suited for document reproduction, art reproduction when the art in question is more or less two dimensional, architectural photography with large flat surfaces that can be shot from a position that places them parallel to the camera's imaging plane ("brick wall" shots), etc.

Many such highly corrected lenses render three dimensional scenes in a clinical way that many find less attractive than less corrected lenses which may render smoother out of focus areas and provide pleasing bokeh.

In his blog article Practical Use of Field Curvature: Wide and Telephoto Primes (where he also discusses 50mm primes that he had previously examined in a similar article² in comparison to the wide and medium telephoto lenses he looked at) Roger Cicala says this:

You’ve lived this long without needing any of it, obviously. But when you decide on a lens, knowing how the field curvature behaves will help you decide what that lens can (and can’t) do well. It also shows why sometimes you want to move back and use the longer focal length to get everything in focus on a plane, and other times when the field curvature can help you isolate your subject. It may tell you when the far edges of your image will be sharper than the mid-outer portion; or that you want to avoid out of focus highlights in certain areas of the field of view.

He goes on to say (emphasis added by me):

Or maybe it just confuses the hell out of you. If that’s the case, I continue to make the point I’ve been trying to make for a couple of years. There’s no “it scores a 79; it’s the best lens” in real life. They are tools, and each is a bit different. How well you know and use your tool has more to do with how good (or not) your images are than what it scored on the latest review. You don’t need fancy lab tests to figure that out, you need some time and taking a lot of images with the lens.

¹ So named for Johann Carl Friedrich Gauss, the inventor of the original Gauss telescope objective lens.

In general, lens design is the one thing that has really got better in the last 30 years or so. Modern lenses are designed by getting computers to do the experiments that are needed after the lens designer has done the basic calculations. The computer can rapidly iterate the parameters, optimising for low dispersion, low distortion and focal plane accuracy in hours, instead of the weeks required if the lens prototypes were actually built. So new lenses (if you pay enough) can have almost magical quality relative to the old classics. However, they can also be cheapened more effectively so you still need to watch out.

I like Michael's answer, but I don't see anyone mention the different flange focal distances of the two systems. The lenses obviously need different optical formulas because they project light rays out the rear of the lens in different ways, in order to focus their image on the respectively near or faraway focal plane.

10
What useful information can one gain from a lens element diagram?