Why can I recover more highlight detail from a predecessor model?

I took the same image with a Nikon D800 and a D850. The D850 is the successor of the successor (the D810) of the D800. Here are both images in Lightroom (they have different white balances): 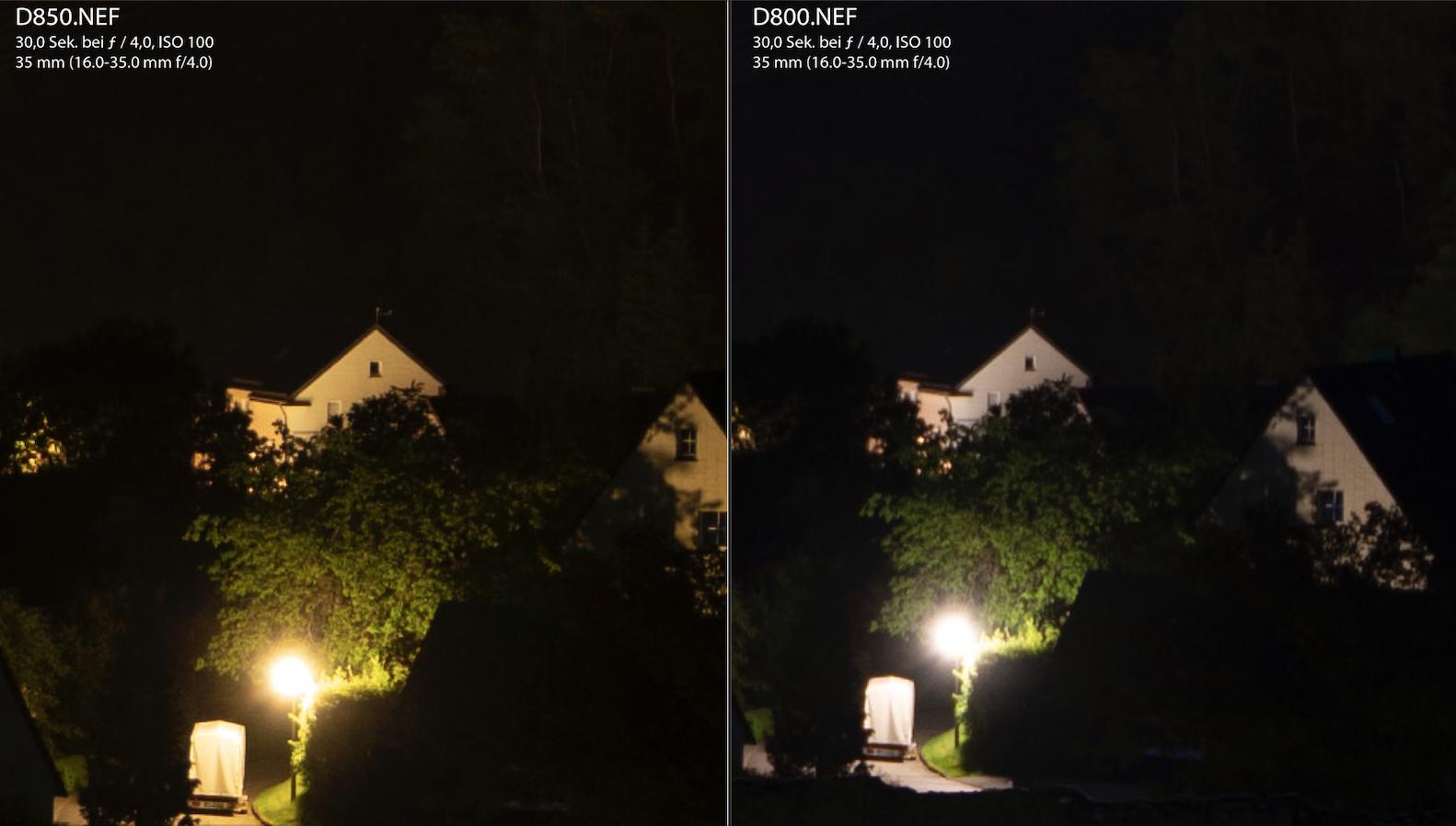 As you can see the highlights around the lantern look about the same. However when I dial in +2.2 exposure and -100 highlights in Lightroom things look different: 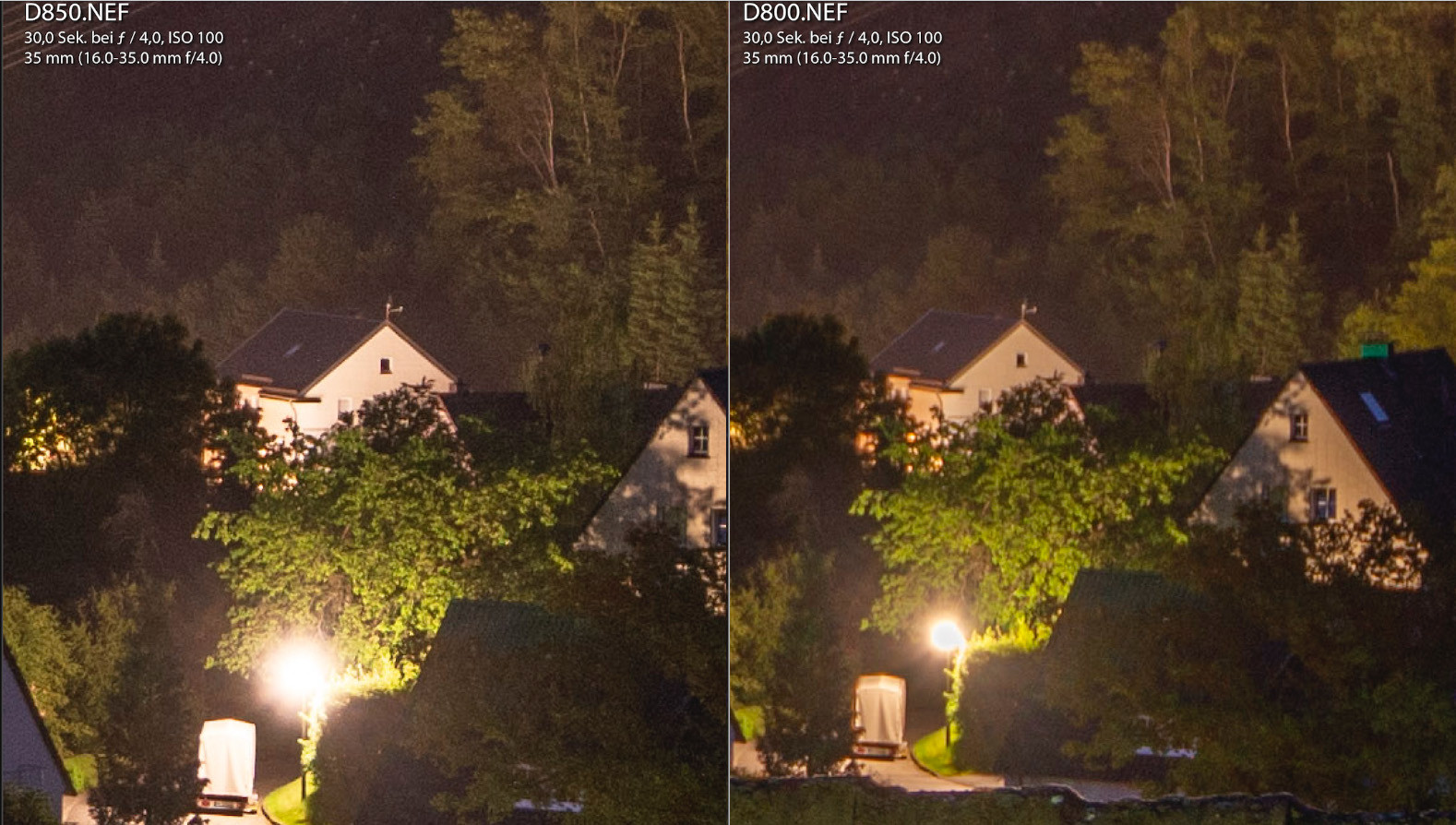 The amount of recovered detail behind the glare differs a lot. Is it possible that this is due to Lightrooms interpretation of the RAW files of both cameras? Or is this a matter of dynamic range? I dont think the D850 should not have less dynamic range then the D800. In fact Ive read they should have about the same amount of usable dynamic range and this is what I would agree with from my experience so far.

I used the same exact lens on both cameras.

The cameras produce different results because you're using the same raw processing settings for cameras that have different sensors and processing pipelines. You need to tweak the settings to match the camera.

Probably the sensor in the D850 is more sensitive, so it looks like it blows out sooner. But shadow detail is probably slightly better. (Sensitivity ≠ Dynamic Range.)

Color correction profiles for different cameras can also have subtle effects that change how settings affect the appearance of images. However, it would not alone explain the large difference in highlight detail.

If the difference between the cameras is consistent across multiple exposure tests, external causes, such as aperture variability and lighting changes are unlikely to cause the differences. (External variability would not consistently affect one camera over the other.) Flickering from AC power cycles is ruled out by the 30 second exposure.

There are probably several things going on here all at once that can each contribute to the variability you have noticed.

For more about aperture variability, particularly with Nikon F-mount lenses which continued to use mechanical connections long after many other camera systems had transitioned to electronic communication between body and lens, please see: What is an electromagnetic diaphragm? and Inconsistent exposure with same settings--why?

For more about flickering light sources, please see: What causes these inconsistent dark bands in some of my photos from an indoor event? Though the effect is different when the light source in question is a small element within the frame rather than the primary source illuminating the entire frame, the principal is the same. How bright a light appears to be will depend on exactly where in the alternating current cycle it was when the camera captured that spot in the frame.

¹ Since I can find no reference to any F-mount 16-35mm f/4E lens having ever been offered by Nikon, I'm assuming your lens has a mechanical connection to the body, which can introduce significant variability from one shot to the next.

² Either that or all of the lighting in the photo was being fed by the same alternating current in the same phase. In that case, the brighter image could have been caught when the lights were at their peak (and also fuller spectrum) and the dimmer image was caught when the lights were in the low point of the AC cycle and less full spectrum and more heavily orange-brown in color. Or maybe the line voltage varied between the two exposures. It's not that uncommon, even in developed countries. The UPS I use for my computer typically measures line voltages anywhere from around 117V to 128V on a regular basis. Though the line voltage provided by the public utility is rated at 120V, it normally runs 122V to 123V most of the time, and I live in a fairly densely populated area of the United States.

For example if each picture expresses twelve stops of dynamic range, one picture might distribute four stops below the midpoint and seven stops above the midpoint resulting in more highlight detail at the expense of shadow detail. The other picture might express seven stops of dynamic range below the midpoint and four stops above it...this would provide more shadow detail at the expense of highlight detail.

Usually with night shots, unsophisticated users will prefer shadow detail over highlight detail and more recent cameras might use internal software and their more powerful processors to bias the dynamic range in the corresponding direction.

Or not - I am speculating. But modern cameras have substantial processing power and use it to try to give people usable images whenever possible based on sensible defaults.

Not the answer you're looking for? Browse other questions tagged nikon lightroom exposure raw dynamic-range or ask your own question.

17
What causes these inconsistent dark bands in some of my photos from an indoor event?
13
Why is a lens darker than other ones when applying the same settings?
5
Inconsistent exposure with same settings--why?
3
What is an electromagnetic diaphragm?

9
How to deal with large exposure shifts during time lapse?
2
Why can I recover more highlights RAW files from some cameras than from others?
0
How is f-stop a measure of dynamic range?
2
How significant is difference in dynamic range between Sony A7 and Canon 5D Mark II?
7
Is analog gain really actually power-of-two only?
2
How many exposure stops can I "recover" from a RAW file?
2
Do phone cameras expose to the right?
3
Can I recover deleted images from Capture One's proxy files?
3
RAW to TIFF or PSD 16bit loses color depth
9
Why is the earth not overexposed in this star photo from the ISS?