How can I figure out source of reflections causing glare?

Recently I've started making videos and an issue I faced when recording them was the glare I had on my whiteboards: 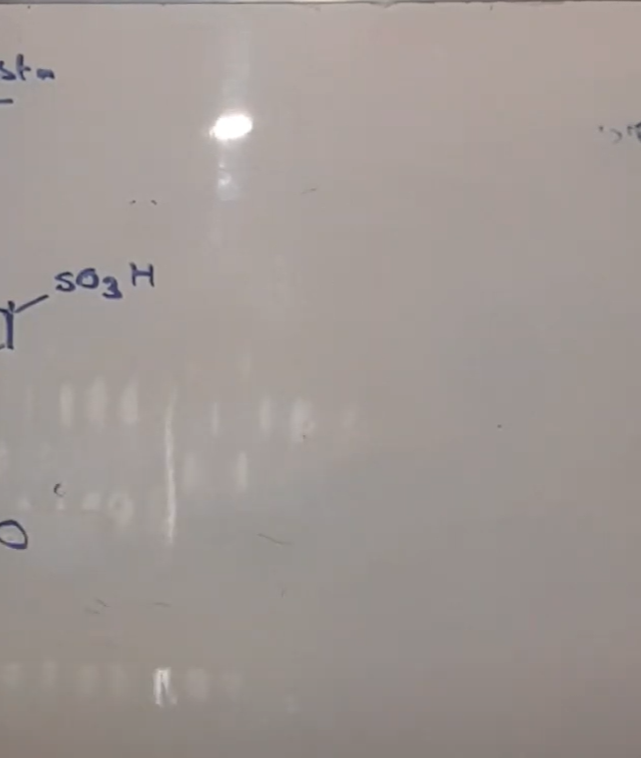 I drew a picture of my source and subject (the whiteboard): 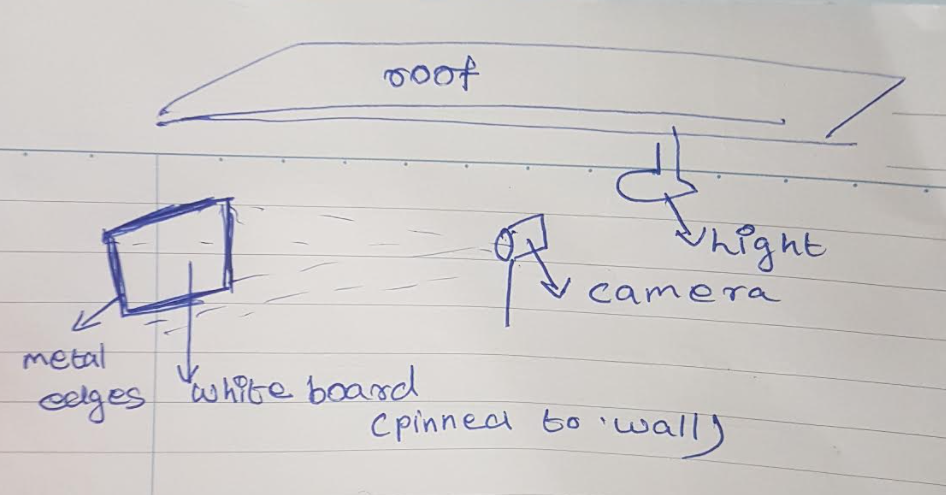 More details: I am using a wix light bulb and the camera is just the rear camera of a Samsung Galaxy S7.

This led me to think that perhaps it is due to a reflection of the whiteboard with some part of the surface of the phone. I tried covering the bulk of the phone and concluded that it's definitely not the bulk. A possibility was the camera itself, but I couldn't figure out how to test for it.

It seems Snell's law can't directly be applied to figure out where the bright spot is from, because there are many sources which can cause the same bright spot.

It's not exactly the most systematic method, but…

Wave your arm around & see when it stops. Include the area in front of the camera too.

Light acts like a cue ball on a billiards table, whether it hits something round like another ball (or a person's face), or something flat like the table rail (or your whiteboard).

Snell's law is not applicable because that is in relation to the refraction of light through a transparent medium. But the law of reflection is applicable. So, as qrk said... angle a (incidence) equals angle b (reflectance)... e.g. imagine shooting a rubber ball at the reflection from the camera's position; in which direction would it bounce off towards? That's the direction of your source. 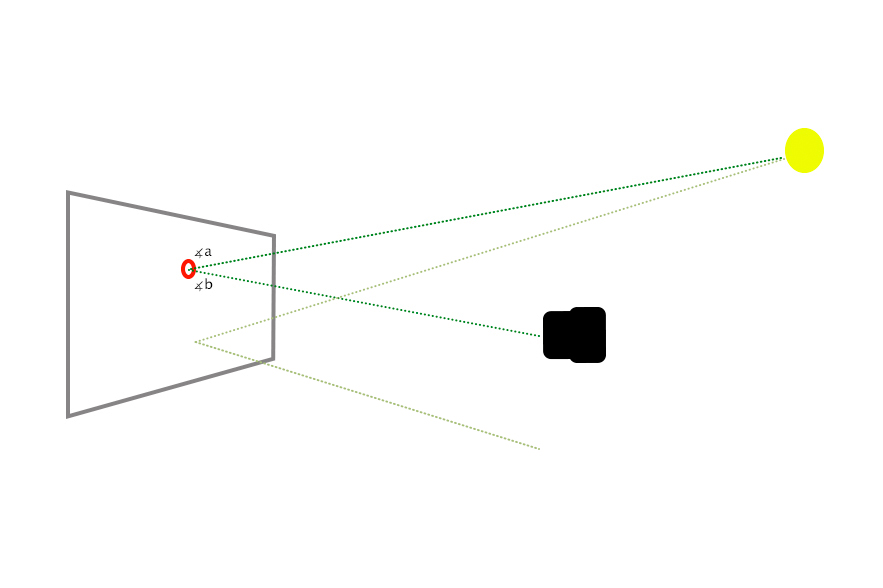 With shiny objects I find it is easier to think of creating the environment the object will reflect rather than lighting the object. E.g. your best bet for lighting the whiteboard evenly is a bright white wall (ceiling/etc) across from it that is evenly lit. In your first image the glare is from the light source directly lighting the white board; and the rest of the white board is being illuminated by reflected/ambient light, which is why it is much less bright.

Angle of incidence = angle of reflection on a reflective surface. With that you can sort of guess where the light source is coming from and can implement Tetsujin's hand waving method to zero in on the source.

Better yet, side-light the white board and turn off all the unnecessary lights in the room. You can side light from the sides, top, & bottom.

Put a sheet of paper. If it is a glare of the whiteboard you will not see it at all on the surface of the paper (B) 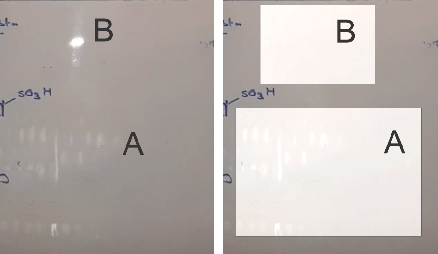 In any case, start moving the paper away in a defined direction, trying to see where you are, either blocking the projected glare, or the source of the glare...

Yea... Waving the paper instead of your arm.😁 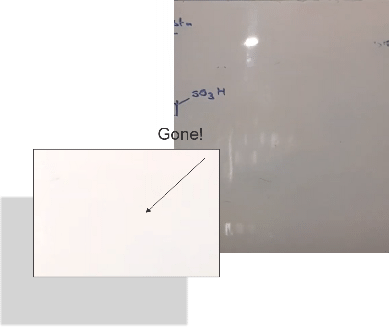 Another thing you can do is placing a flat mirror instead of the paper. It can be aluminum foil on the shiny side, and see the reflections more clearly (If they are reflections of the whiteboard in the first place).

as I raised the height were camera, the 'light spot' on the board raised height as well.

If the glare is above the camera level, the source is above you. The elephant in the room in the light on the ceiling...

A smooth surface will reflect sources of light as if it were a mirror. This happens no matter the colour (even black).

Place the camera perpendicular (90°) to the material you wish to copy. This is to minimize distortion, keystone effect, etc.

You are creating a standard copy stand lighting configuration. 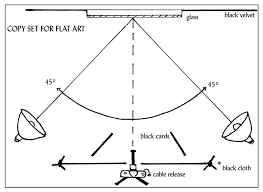 You need an "angle of incidence = angle of reflection" detector. 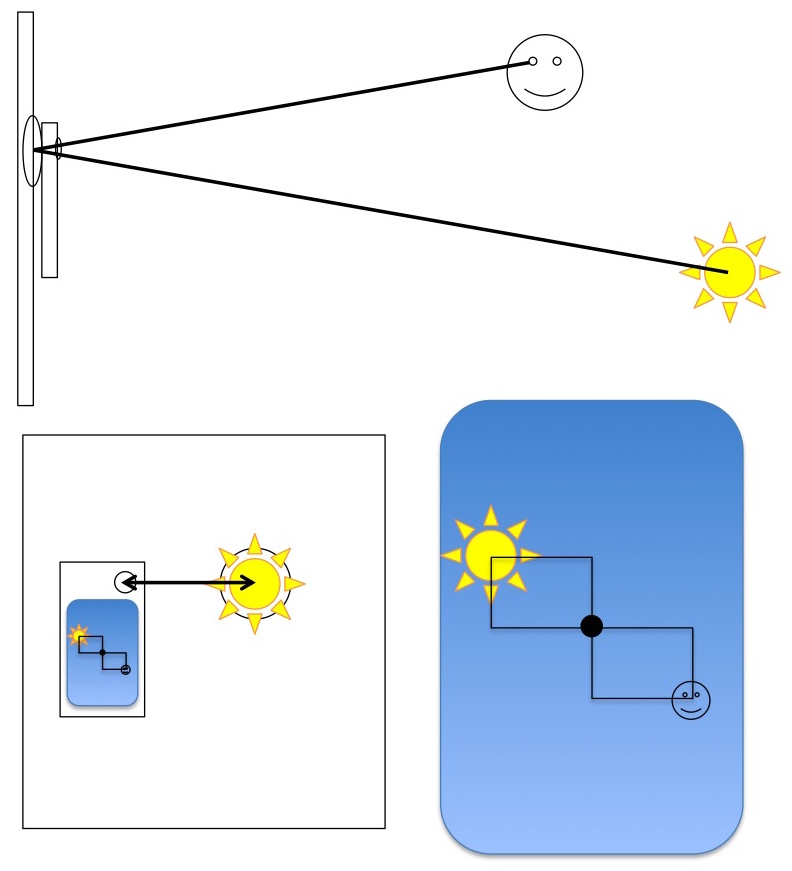 If you have the glare all the time it could be your flash/torch of your phone. Dd you check that this is turned off (not on "automatic" or "on")?

You might want to go to a grocery store that has bright overhead lights and a shiny floor, look at the reflections of the lights on the floor, and see what happens to where the light appears to be on the floor changes as you walk towards the light. This may help you understand what's happening to the glare as you move your camera.

Systematic Technique: Use "Process Of Elimination"…

Turn off (or cover) each light in-turn as you look at the subject.

When you kill the source that caused the glare, you have identified what is causing the glare.

Eliminating the glare is the subject of a different question.

15
How to avoid glare in macro photography?
9
How to reduce glare from glass during photo editing?
14
How do I get this 'glare' effect?
7
How do I reduce glare on subjects during night flash photography?
2
How does a glare arise in images?
2
How can I remove glare from a picture of a painting in Photoshop?
7
What is "veiling glare"? How does it affect my photos, and how can I avoid it?
1
How can I eliminate glare from stage lights when taking concert photos?