How to process 360 photos without creating seam?

I shoot 360 photos with a 360 camera that takes the entire scene with two wide-angle lenses that are stitched together to obtain 360 panoramas. I use Rawtherapee for post-processing and colour correction. Unfortunately, I don't have the original fisheye photos anymore.

The scene is stitched flawlessly by specific software for my 360 camera. The problem is that RawTherapee doesn't account for the image wrapping around from the left edge to the right edge, even when there is the proper EXIF information for the 360 photo projection type. Every time I use settings that act "locally" within the photo (Shadows/Highlights, Local contrast, anything that involves a "radius" of action), it results in a colour discontinuity.

To overcome this, I use GIMP to enlarge the photo by 'x' cells on both sides (and above) by pasting part of the photo which is connected (on a 360 perspective) for each side. This allows me to use those Rawtherapee's settings without concerns, but it takes longer to post-process photos this way.

Is there a tool/software/workaround to solve this problem in a more time-efficient way? 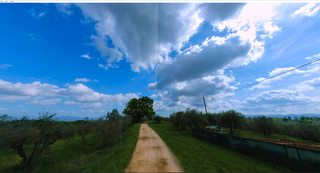 To me, this looks a lot like RawTherapee is introducing the issue. I've never had any "seam" like this editing equirectangulars in Photoshop or Lightroom. I suspect using the Gimp to do your image adjustments might also avoid the seam.

I don't think it's a matter of doing local/radius edits throwing off the matching, because the seam is thin and uniform and across the entire image.

Maybe don't use RawTherapee. I just took your original panorama, processed it to be neon-bright-saturated in darktable with a Curves adjustment and some color shifting, exported it, created a QTVR file out of it, and it did not exhibit the edge seam you show.

Not the answer you're looking for? Browse other questions tagged post-processing gimp lens-flare 360-panorama rawtherapee or ask your own question.

10
Does rotating a photo count as a destructive editing?
6
How to make spherical (360) panoramic image with 2:1 aspect ratio?
3
How can I replicate the style of images produced by an old Finepix digital camera?
4
Why is Autopano better than Hugin at stitching a 360 panorama from ~300 images?
3
Are my RAW photos underexposed?
10
Are there standards for 5 star rating scales of photos?
5
How to view 360° photos on a desktop?