Me and my friend both own the Nikon 24-70mm F/2.8G lens. When we met today I put my camera on the table next to his. We noticed that the front element of our lenses must have different coatings because they reflect light in different colors and the observation wasnt a matter of the viewing angle. Is it possible that the coatings on the lens where changed over the years? Do they wear out? I own that lens much longer than him and I used it almost 100% of the time outside where he mostly shoot indoors in lower light. Or can this even be a sign of a counterfeit lens? 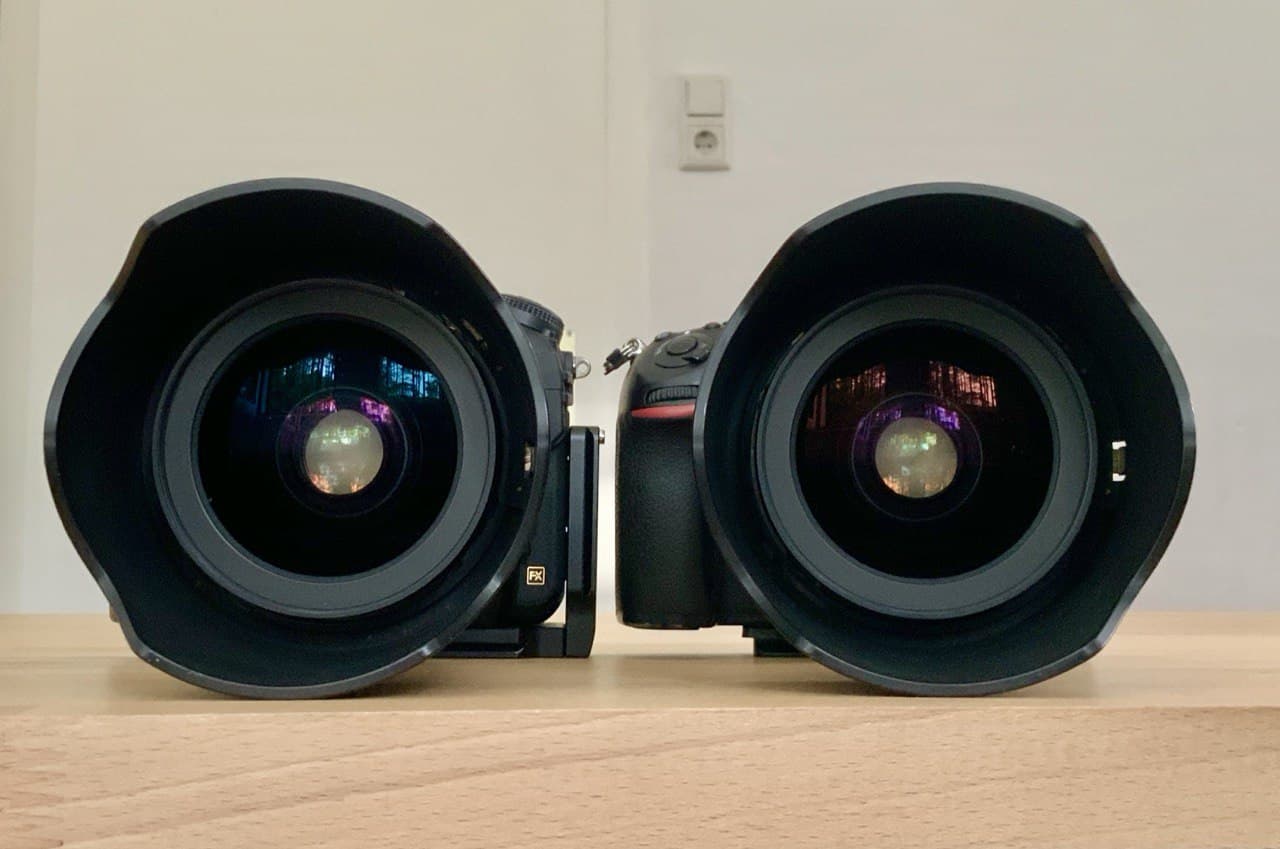 I would like to know what they have changed and why.

My lens is the blue one. Mine was bought new and he bought his used. My lens has serial number 9005xx and the other one has 8873xx. This could actually explain something.

The coatings do not have a color and do not wear out with exposure to sunlight... it's also highly unlikely to be a manufacturing tolerance/variable issue IMO (although that is possible).

It's quite possible that Nikon changed the material the coating is made from, or the thickness of the deposition, over the years for some reason (e.g. from Magnesium Fluoride to Silicone Dioxide to fine tune the color response/transmission for newer sensor technologies). But I don't know how you would find that out for certain.

Taylor went on to experiment and artificially aged lenses using various methods. This truly was an important discovery because new lenses suffer a 4 to 6% loss in light due to light being reflected from their polished (mirror like) surfaces. Now lenses used in cameras and telescopes are complex systems with many lens elements sandwiched together. Thus, multi-lens element systems can suffer a light loss of 40 – 50%.

Today, many coating methods are used. It is the thickness of the coat that does the trick. If the coat is ¼ wavelength thick, light traverses the coat and most of the reflected light from the polished glass hits the air coating junction and is re-reflected. Thus rays ordinary lost will contribute to image brightness.

This discovery and remedy is important as modern lenses often use many elements and groups. Losing 4 to 6% at each junction translates to quite a high loss. Most loss is from internal junctions (glass to air and glass to glass) within the barrel. Each internal reflection caused light rays to go astray, and many misdirected rays bathed the film/chip with light scatter called flare. Flare is devastating; it degrades the image by reducing contrast. Gross reflections cause glare spots.

Many coating methods are used. One method is to place the lens to be coated in a vacuum chamber. The air is evacuated and the mineral that will be the coat is heated causing it to vaporize. This vapor condenses on the glass lens and coats and etches. It is the thickness of the coat plus the material that does the trick. Each coat is optimized for just one color of light. A modern lens has multiple coats applied. Each coat is different in thickness. A high-quality lens can have as many as 7 thru 11 coats.

As time passes, coating technology advances. Likely each discovery will give small improvements.

The color seen when looking at the lens is based mainly on the thickness of the first coat. Coating materials and methods change as this science advances.

A tip of the hat to Harold Taylor.

I would like to know what they have changed and why.

I guess it is possible that Nikon modified the coating of the lens model between production runs, but I think it would be highly unlikely.

My lens is the blue one. Mine was bought new and he bought his used. My lens has serial number 9005xx and the other one has 8873xx. This could actually explain something.

Since your friend more recently bought his lens used, which actually was manufactured earlier than yours based on the serial numbers, I think it is far more possible that (one of) the previous owner(s) used something they might should not have used to clean the front of the lens. This either removed one or all layers of the coating or chemically reacted with it to alter what colors it reflects/and absorbs and what colors pass through it at the highest rates of transmission. Or maybe it was either you or your friend who used something to clean one of your respective lenses that probably shouldn't have been used?

Roger Cicala at lensrentals.com has noted that some of the more recent "improved" lens coatings from several manufacturers are more fragile and more care must be taken when cleaning them to not damage the coatings. In the past, most lens coatings on the front of lenses were fairly robust. The 'G' model of this lens came out in 2007 and was supplanted by the 'E' model in 2015, though apparently both are still in production. I'd expect the 'G' model to have fairly hard to damage coatings on the external surfaces. The 'E' model includes at least some elements coated with Nikon's 'Nano Crystal Coat'. The front and rear element have fluorine coatings, which are supposed to be smudge and smear resistant. But it is fluorine coatings that Roger Cicala has been less than thrilled about.

If that is the case it's not the end of the world in terms of color. Especially if one shoots raw and does careful color correction in post processing, the end result will not be significant at all. It just might take slightly different color correction settings to get the same result from one lens to the other. If one does detailed color calibration using a tool like X-Rite's Color Checker, the color profile generated using that lens will pretty much correct for any slight color shift. Of course, one would need to do a different color profile for each lens one uses on each camera, and then use the appropriate color profile generated using the particular camera-lens combination when converting the raw files, to get results that exact.

I'd be more concerned about the anti-reflective properties having been negatively affected. This might show up in reduced flare resistance and an overall loss of contrast when shooting into harsh backlight or with very bright light sources just out of frame. The reflection from the lens on the left in the photo not only seems to be bluer, but also brighter. This might indicate that the anti-reflective properties of the coating on the front of the lens has been reduced somehow.

It also might be possible that one of the two lenses in question has some evenly distributed smudges due to skin oil from fingerprints or other contaminants. I've found that if I try to use dry microfiber cloths to clean lenses, as many people seem to do, all it does is spread some contaminants evenly over the surface of the lens. To get the lens clean I must use a cloth moistened with a few drops of lens cleaner, and then dry the lens with a fresh, unused portion of the microfiber cloth. I've also found that microfiber (and other) cloths that have been contaminated with skin oil will spread it on a lens that doesn't even have a smudge to begin with! I specifically handle only one side of my "clean" microfiber cloths used to clean lenses and only allow the other side to contact the lens. Once they've been used a few times I replace them with a fresh cloth and use the older cloth for less critical tasks, such as for household cleaning.

Not the answer you're looking for? Browse other questions tagged lens optical-coating or ask your own question.

1
Why does Canon have Two Kinds of Nanotech Lens Coatings?

18
What is a good two lens "starter kit"?
15
Overlapping vs. Complementary lenses
5
How durable are external lens coatings?
3
What lens should I use to be able to fill the frame with a mounted 35mm slide at 12 inches?
3
What criteria to consider to match cameras and lenses for shooting people at parties?
6
Do nano coatings actually make a difference?
4
What exactly "professional-grade" means in Nikon line of lenses?
1
Which lens coatings reduce internal reflection?
13
Why is a lens darker than other ones when applying the same settings?
1
Why does Canon have Two Kinds of Nanotech Lens Coatings?