Ask Question
Asked 8 months ago
Active 7 months ago
Viewed 136 times
1
This question already has an answer here:
What could cause exposure problems after my camera got wet? (1 answer)
Closed 7 months ago.

I took my D4 out for a walk yesterday. Out of nowhere it started to rain heavily. Of course I did not have any cover or whatsoever with me. I walked about 20 minutes with it through the rain back to the car. I was not worried too much since I had used other Nikon DSLRs in heavy rain multiple times in the past and they never let me down. Back in the car I turned on the camera to check if everything is okay and the camera did turn on. I did not take a picture, I just checked the upper display. I let the camera dry over night. This morning I wanted to use the camera and she did not turn on. The upper display was indicating the battery was empty so I took out the battery to charge it. In this moment I realized, that the battery was a little bit wet. I immediately got a hairdryer to get possible moisture out of the battery compartment.

A few hours later the battery was fully charged and I placed it back in the camera but the camera wont turn on. When I put in the battery the upper display shows an empty battery symbol. I also tested a second battery which wasnt in the rain with me yesterday. When I turn on the camera the green LED on the back lights up for a second as normal and also the backlight of the buttons and display work fine but I cant use the camera.

Of course when nothing helps I will have to get the D4 to a dealer but maybe you have some suggestions for me. Please let me know.

EDIT: I sent the camera to Nikon and they sent it back immediately without even opening it because they dont have replacement parts for it. However I wont give up on my D4. I cant accept to sell it as defective. I opened the body and just like I assumed there was corrosion on the power board: 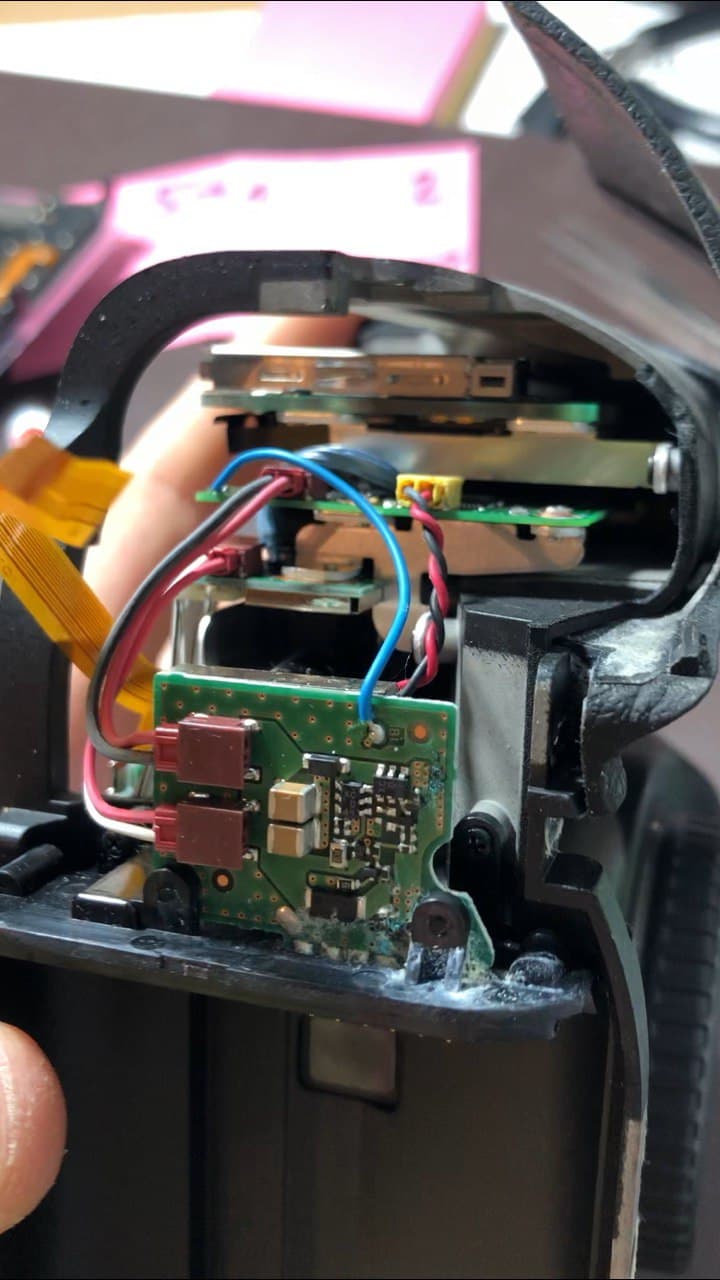 I cleaned everything from all sides with alcohol but camera still doesnt turn on. Do you know a place/person where I can get a replacement for this board? I cant find anything on ebay. If I cant find anything I might get down to component level repair. Im pretty sure the rest of the camera is fine. I guess there is a tiny transistor or cap that might be blown.

The last thing you should do when an electronic device, such as your D4, gets wet inside is power it up. Instead, you should remove all power sources immediately and not provide any current to the sensitive electronics until the device has been thoroughly dried for several days. Impurities in water (yes, even rainwater has impurities in it) will conduct electricity and can short out the micro-electronics in the device.

If the power source is removed immediately and the device is allowed to thoroughly dry, there's usually no permanent damage or corrosion if there are no salts present.

We're not just talking about table salt (sodium chloride) or sea salt (NaCl + several others in trace amounts) here, but rather any chemical compound considered a salt, such as Potassium Dichromate, Copper Sulfate, or Calcium Chloride. If there's very much ionized salt in the water the device is probably a lost cause. Even if the device doesn't die immediately, the salt deposits left inside after drying out will eventually corrode the internal electronics.

If camera service centers, particularly the official ones owned by the manufacturers, get so much as a whiff of evidence that water has been inside a camera body they will say the damage is not covered by warranty. If they get a whiff that salt water was involved, such as by seeing green corrosion on external screws, they often won't even open the camera up inside their facility.

At this point you don't have much to lose, so you might try the technique used by the "Nikon Repair Center in Taiwan" (who clearly disclose at their website: "We are not an official service provider for Nikon Corporation") to fix an expensive Nikkor lens that had been dropped in the ocean.

We've had a few other questions here that address water damage:

What could cause exposure problems after my camera got wet?
Can I do anything about a Nikon d750 taking 5 minutes to power on after taking saltwater damage?
DSLR in sand and salt water
Why does my autofocus sometimes set the aperture, after the lens was in the rain for several minutes?
Water-damaged Canon EOS 550 giving Err 70

You should have removed the battery as soon as your test showed something was wrong. You may have electrolytic corrosion on the circuit boards in the camera. Removing the battery prevents electrolytic corrosion. You need to dry out the innards of the body. Remove the lens, remove the battery, and open the battery compartment. You can put the body in a container with desiccant (silica gel or rice), being careful not to get any particles in the mirror box. My favorite drying solution is placing the body in a hot car for a couple days. If this doesn't fix the problem, repair or retirement of the body is in order.

I have seen the resuscitation of two cameras on field trips that went for a swim, one a point & shoot, and the other a DSLR. Following the above guidelines (placing the cameras in direct sun was the only option), the cameras came back to life.

Not the answer you're looking for? Browse other questions tagged nikon repair equipment-damage or ask your own question.

2
What could cause exposure problems after my camera got wet?
8
DSLR in sand and salt water
2
Can I do anything about a Nikon d750 taking 5 minutes to power on after taking saltwater damage?
0
Why does my autofocus sometimes set the aperture, after the lens was in the rain for several minutes?
0
Water-damaged Canon EOS 550 giving Err 70

7
What is the natural upgrade path for a Nikon d200?
12
How do I dry water condensation off my camera?
0
Water-damaged Canon EOS 550 giving Err 70
0
Dead D7000 rear LCD?
0
Tethered Shooting and Monitor - Nikon 3DX
2
D5100 blocked in "Lock mirror up for cleaning" state
0
How resilient are old SLRs to water damage
1
Canon EOS film camera stopped working after trying to use flash
2
Nikon D610 error after each shot
3
Can this water damage to my Canon T6 be repaired?