Is taking photos with the back side of a film roll a real technique?

A friend of mine recently told me about a film photography technique wich consists in turning over the film roll and taking photos with the back side of it.

Photographs end up turning red-ish due to the inverse order of color layers.

I'm interested on trying this but I don't know if it's true. I don't want to waste an entire film roll and realise it didn't work.

Does anybody knows about this? (I work on a 35mm format)

film alt-process
Share
Improve this question
edited May 6 '21 at 18:49

Yes, this technique is known as redscale. You can find a decent amount of information by googling using that term, and see example photos on Flickr.

What you need to do

Technically this would be easiest to do on large format film, as all you'll need to do is to load the sheet the wrong way around. But experimenting with large format film in this way would also be incredibly expensive.

On 35mm you'll need to figure out a way of loading the film cassette so that the film inside is inverted – you cannot simply invert the cassette in the camera, since most (all?) cameras will not physically allow this. (If you know of a camera that does, please let us know in the comments!) It used to be possible to buy C41 film in bulk (e.g. a 30 m roll), which you would then cut and load onto a reusable cassette yourself. Bulk C41 film seems to be in short supply these days, so what you can do is to sacrifice an ordinary cassette by pulling the film out and cutting it, and then load it backwards onto the reusable cassette. Alternatively, you can tape the inverted film onto the stub in the old cassette and spool it back. Note that all of this has to be done in complete darkness (darkroom, changing bag), otherwise the film will be fogged and rendered useless.

Alternatively, Lomography makes a redscale film that is already inverted, so you load it just like any other film. However, it is out of stock as of this writing. 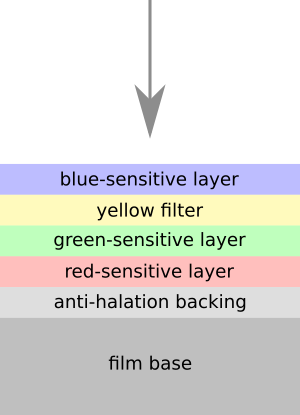 Light enters (normally) from the top. Basically the film consists of three layers of silver halides and dyes, each layer sensitive to different parts of the visible spectrum. (In processing, the silver eventually gets washed away and what remains is three layers of dye in yellow, magenta and cyan, forming the final colour negative.) It turns out that all layers are somewhat sensitive to blue light, which is why a yellow filter layer is sandwiched between the blue-sensitive and the other layers. This keeps most of the blue light from entering the green- and red-sensitive layers.

Now, if you invert the film, the order in which the layers are traversed is also inverted. Most notably, blue light now cannot reach the blue layer because of the yellow filter, meaning that blues tend not to be registered in the final image.

Is it worth it?

There is the argument that any analog effect, including redscale, can be reproduced digitally to any desired degree of perfection. This is probably true. However, the analog thing can be a fun experiment to conduct. Personally, I wouldn't be tempted to do this, at least not on a regular basis, unless I also did my own C41 processing, since lab costs pile up on whatever money is lost already on film stock while experimenting. (I also suspect labs might charge a premium for film that arrives in anything but an off-the-shelf, undoctored cassette, though am not sure.)

The film needs to be reversed into a film canister. This can be done using a photographic changing bag and a standard reusable film canister such as those sold to be used for bulk loading.

The original canister can be opened with a tool or simply with your finger nails. The unexposed film should be attached to the reusable spool with tape. Winding on to the spool backwards will be easier if the original film is cut in two because it needs to be wound opposite the way it will tend to curl. A flathead screwdriver engaging the end of the spool might also help provide better leverage for winding.

Not the answer you're looking for? Browse other questions tagged film alt-process or ask your own question.

11
What happens if I redscale a B&W film?

5
What does the temperature specification on a roll of film refer to?
5
Missing photos on a roll of film?
3
My roll of film didn't rewind inside all the way
0
Whats wrong with my roll of film?
2
Can you reprint photos off a roll of film?
1
Why is my film SLR taking white photos?
4
Hold baggage xray scanners - how likely is it my film might have survived?
2
How do I manually advance the film roll on Canon Autoboy Luna?
4
What's the actual process for making long exposures with an RB67 ProS and dual cable release?