What Conversion Engine works best in Photoshop? ACE or ICM

Are there significant differences between these? Does one do a more accurate job than the other and, if so, are the differences visually significant?

One specific measure of accuracy is self consistency. For instance if one has an image in sRGB and converts it to ProPhoto RGB then back to sRGB again the results should be quite close since sRGB's gamut is smaller in every dimension than ProPhoto.

So, if we consider a set of all possible, 8 bits per channel, sRGB colors and convert them to ProPhoto RGB then back to sRGB what is the maximum error produced by the Microsoft ICM Engine v. the Adobe ACE Engine?

If there are errors, how large are they and are they visible?

Adobe ACE wins hands down. It produced no differences when converting all 16M (256^3) RGB colors from sRGB to ProPhoto RGB and back to sRGB when working with 16 bit tiffs and rounding to 8 bits per channel.

Microsoft's ICM produced significant errors mostly associated with the green channel. The largest visual error occurred with the color sRGB(0,54,0). After the roundtrip it turned into sRGB(32,54,14) which visually, differ visually by a delta E of 12. A delta E of 1 is considered the threshold of visual color difference so this is pretty far off.

With the assistance of @Tetsujin, I have been able to compare conversions of Photoshop on Apple iOS as well as Windows for 8 bit tif images. The following is a cumulative deltaE error chart for each of the two CME's in Photoshop platforms. 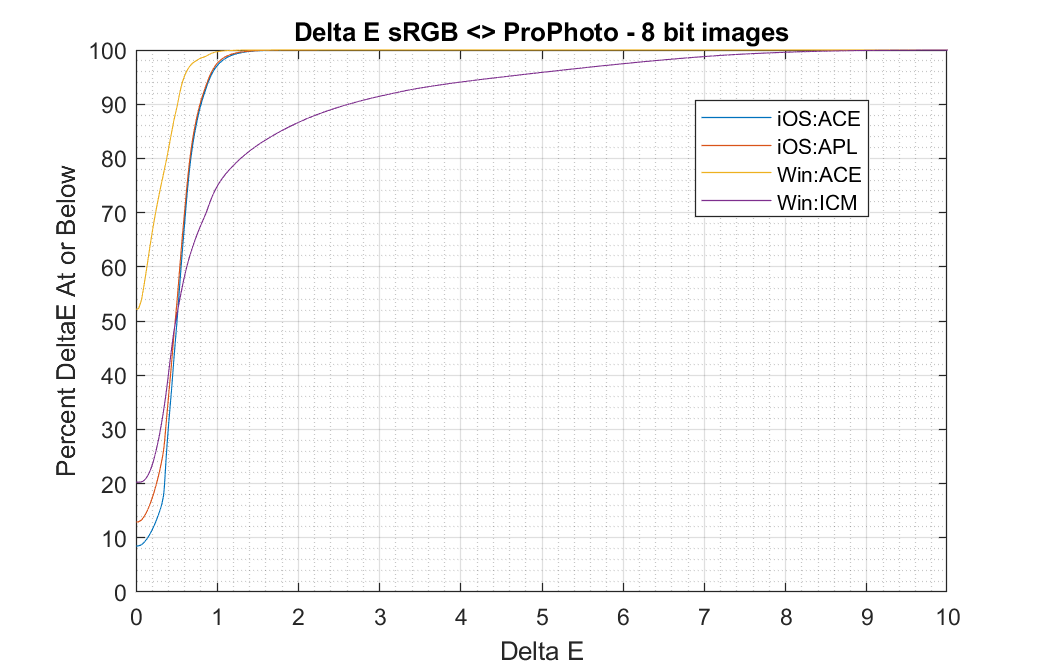 To interpret the chart, look at the CME under use. For instance the Microsoft ICM, which is particularly bad, has 87% of the 16M colors undergo less than 2.0 delta E errors hence 13% exceed delta E of 2.0. And just over 4% exceed 5 delta E.

Update I have analyzed 16 bit tif conversions. All Apple CMEs and Windows Adobe ACE retained color integrity to better than delta E of 0.02. However, the Microsoft ICM CME was just as bad as the earlier results. Likely it uses fixed point arithmetic with a limited bit range. Possibly because it was developed back in the day when CPUs had poor performance at higher precision fixed or floating point.

Basically, just avoid using the Microsoft ICM CME in Windows. Fortunately, it's not the default.

Not the answer you're looking for? Browse other questions tagged photoshop color-management icc-profile or ask your own question.

7
Adobe RGB to sRGB conversion, why does the color change?
3
What is happening when I convert from a source color space AdobeRGB to a Canon photo paper profile?
0
Is conversion from one colour profile to another clearly defined
4
Why Do I Experience Color Deviations with sRGB JPEGs?
3
How to check if there are any out-of-sRGB-pixels in an image?
6
Why are image colors inconsistent in different applications after monitor calibration?
1
Color profiles in export as and automated batch export are different
3
Effect of assigning an ICC color profile at different stages
2
Converting from sRGB to ProPhoto & vice versa on Photoshop (with a 120% sRGB screen)
1
GIMP's color profile options on file opening and on export