What are these curved, dark bands at the top of my photo? 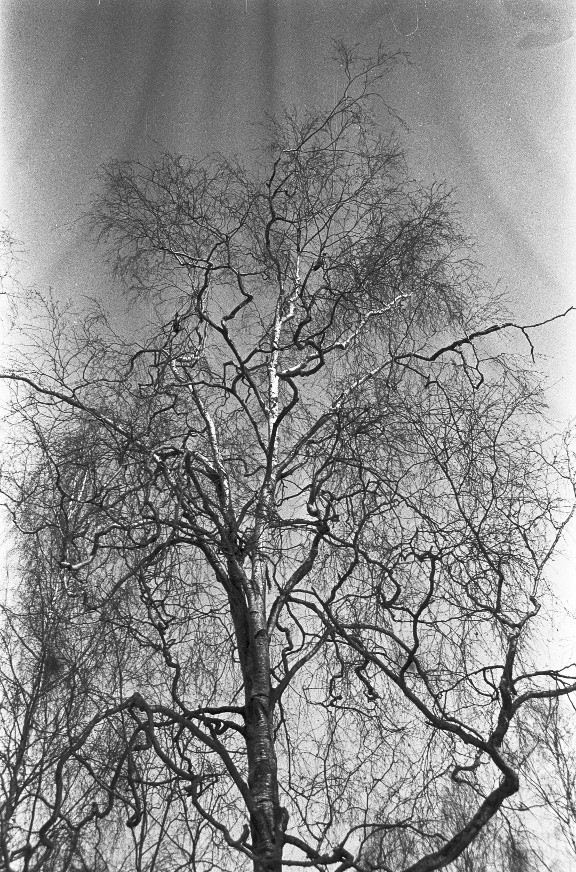 I've had these on two different rolls of film on two different cameras now. It's not a scanning issue, because the bands are visible in the negative when inspected. It's only visible against the sky, but it's not there in every such picture, either.

I'm suspecting from the looks of it that the film could be somehow getting wrinkled in the camera a bit, but I'm not sure, and I don't know why that would happen. It doesn't look like any kind of a flare to me, but I might be wrong. There were some minor light leaks in some photos (I'll have to fix the light seals later), but I don't see how a light leak could cause a curved shape like that.

I doubt it's any kind of a defect in the film stock or a processing error in the lab, as then you'd expect the bands to continue to the adjacent frame, but they don't.

The temperature outside when shooting was below zero degrees Celsius, but not particularly cold. It doesn't look like an artifact caused by static electricity or anything like that.

The film is Ilford Ortho+, but I had the same problem with FP4+. The camera is an old SLR (Fujica ST801) with a 35mm lens (but I had a similar issue with the native 55mm lens as well). I don't remember the exact exposure settings, but the aperture could have been set to f/11.

So, what is causing these artifacts, and how can I avoid them?

It's possible that the bands were caused by over agitation of the negatives. I would speak with the lab technician who developed the film. Were the negatives put into a machine or were they developed in a hand-held tank?

Not the answer you're looking for? Browse other questions tagged film artifacts or ask your own question.

4
What caused excessively high grain in Delta ISO 400 film developed by a shop?
6
(film) What can cause blue vignetting on sub-exposed or dark shots?
1
Possible cause of light leak in film SLR
4
Orange and other artifacts in photos from film camera
3
Light leaks in RB67 film handling?
4
What is causing the light leak in my Hasselblad A12 back?
1
Light leaks all over the photos
1
What causes these light leaks on bulk loaded film
2
What is causing these horizontal lines on developed photos (35mm)?