This is my first time trying to develop film. I just bought a camera from ebay and the seller said everything was working fine. The film I used was the Ilford hp5 plus and I developed it with the cinestill df96 and used the JOBO 1520 tank. Here is a picture of the developed film. Below are two of them.

Only the middle frames of the film were developed. I used the instruction manual for the film developer and followed it word for word.

The film was loaded in a bathroom with no light coming in because it was midnight and all the lights in the house were off. I had the chemical at 80 Fahrenheit, agitated for 3 minutes straight. For the agitation I did inversions about 6 inversions every 10 seconds. After the developer I did the Ilford wash method and took the film out.

I can think of a bunch of different things however I don't think the camera is the problem because a couple of frames were developed. I probably loaded the film incorrectly or didn't agitate correctly I really can't tell. If anyone has an idea just let me know because I really want to know where I went wrong.

If anymore information is needed just let me know. 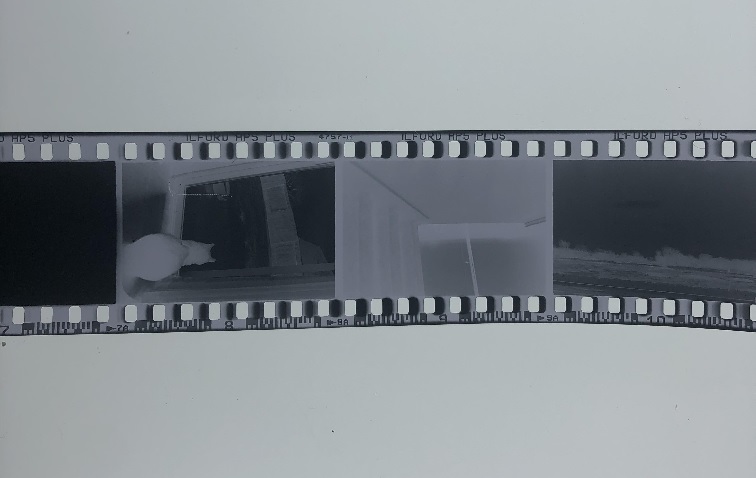 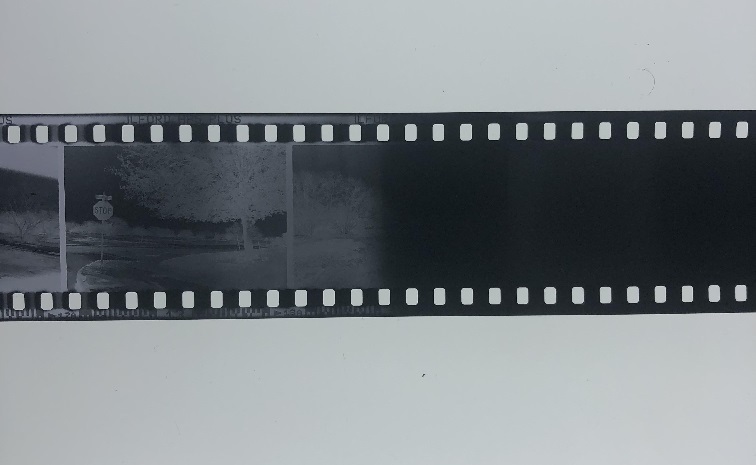 It looks like your film was developed just fine. What you're seeing is fogging by an unwanted light source. The sprocket hole 'ghosts' are quite indicative of this. It seems the film was fogged when it was rolled up, as light passed through the sprocket holes and hit the film behind it.

Carefully go through the steps and see where the fogging may have occurred. Perhaps you opened the film door as the roll was still outside of the canister, or some moment during loading/developing the film was struck by light. Based on the pictures I do not believe the camera to be at fault.

Looks to me like some sort of light leak, given that you've had success with some frames on the roll and the film code is clear and legible on those frames.

The first pic is simple what happens when you don't load your film into the camera in complete darkness, and light exposes the film between the leader and the first frame. This is to be expected; some people even find this appealing.

The latter pictures seem to show the faintest hint of some frames which would imply that the camera is still working, but seems like the film has been exposed to light at some point before or after this. There are several ways this could happen:

I've shot and developed a fair bit of HP5 in my time and I've never had results like this from developing, but I suppose I can't rule out your chemistry as part of the problem, since I've only ever used Ilford DD-X or Rodinal.

A couple of further tips which could be beneficial:

Not the answer you're looking for? Browse other questions tagged film developing black-and-white negative-film ilford or ask your own question.

7
Do longer stopping and fixation times have any influence on the quality of the film?
4
What caused excessively high grain in Delta ISO 400 film developed by a shop?
3
How far can you push process an accidentally under-exposed film?
28
Why are these film photos brighter than digital photos taken at the same time with the same settings?
7
How do different developing fluids affect black and white film?
12
Two films in a tank, only one comes out with a development error – why?
0
What is the correct developer for BW Kodak Tmax 400?
1
How many rolls can be processed with ILFORD powder developers at various dilutions?
3
Ilford HP 5+ 4x5
1
Why did my developing tank almost burst open when using citric acid as a stop bath after developing with caffenol delta recipe?