I have this cool dish shaped flash thingy. It's from before the dinosaurs so it takes flash bulbs that burn up in one go. I'm hoping I could modify it to a pure electric flash.

I though some replacement bulb must exist but I had no luck finding them. 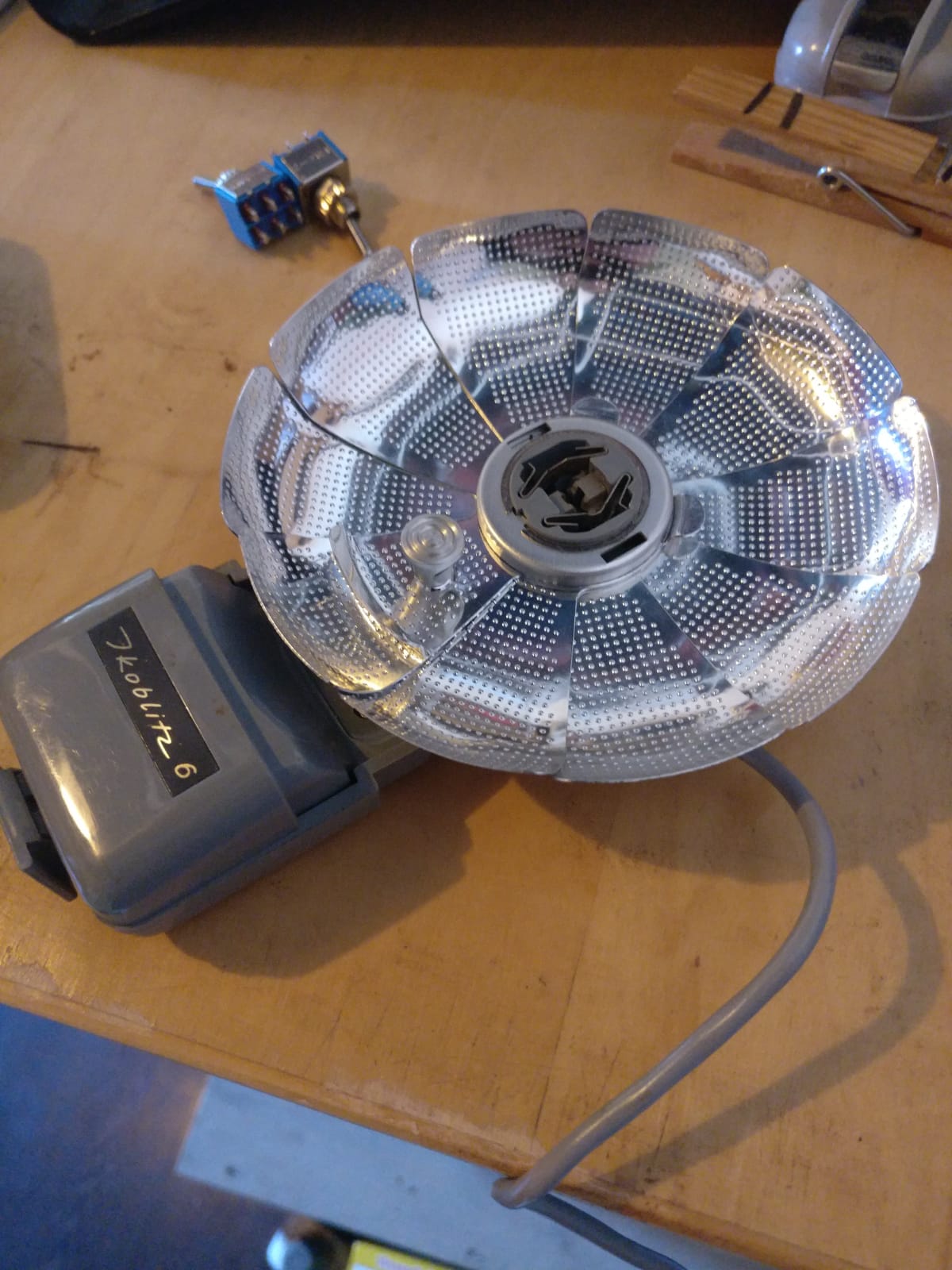 Original flash bulbs aren't all that rare -- last time I looked, they were pretty easy to find on eBay (maybe Etsy too, these days). There are several kinds, however; the bayonet style (base like an old style incandescent tail light bulb), the push-in "M" style, and the "AG" ("all glass") type with no applied metal base. I can't tell for certain from the photo which kind your Ikoblitz unit takes.

I'm not aware of any electronic flash units that plug into a flash bulb socket like the one in that reflector, however -- the first of those that I recall were for FlipFlash or Flashbar (late Kodak Pocket Instamatic and Polaroid SX-70 family, respectively); instead, there were and are many different electronic flashes that would mount in the same "hot shoe" that Ikoblitz does -- an accessory shoe on the camera with contacts wired to the sync system in the camera shutter. Even current manufacture add-on flashes made for DSLRs should work with a hot shoe on (as an extreme example) late 1940s vintage leaf shutters with PC sync socket (though you'd need a shoe adapter that connects to that socket in that case).

The reason electronic flash won't work with bulb sockets is voltage -- electronic flash uses between 300 and 450 volts, while bulbs need between 1.5 and about 21 volts. There isn't enough power in a bulb flash to fire a xenon flash tube, but most electronic flashes use a simple external contact switch to fire (some with protection against high voltage on the contacts, older ones often without).

The flash is a german make produced by Zeiss. Replacement bulbs are called RF1B Blitzlampen (translates to flash bulbs). You may have luck with that as a search string. Form time to time, the tend to show up on ebay, or a photo store sells them as vintage stuff for around 15 Euro/Dollars a pack.

There is also the german manual page here: https://www.kameramuseum.de/blitz/zeiss-ikon/ikoblitz-6/ikoblitz-6-anleit.html which states, that you can also use bulbs of the type AG1, but should then use the clear part of the cover of the flash over the bulb to protect from potential burst of the bulb.

Also, the B at the end of some bulbs seems to stand for blue hue of the light. 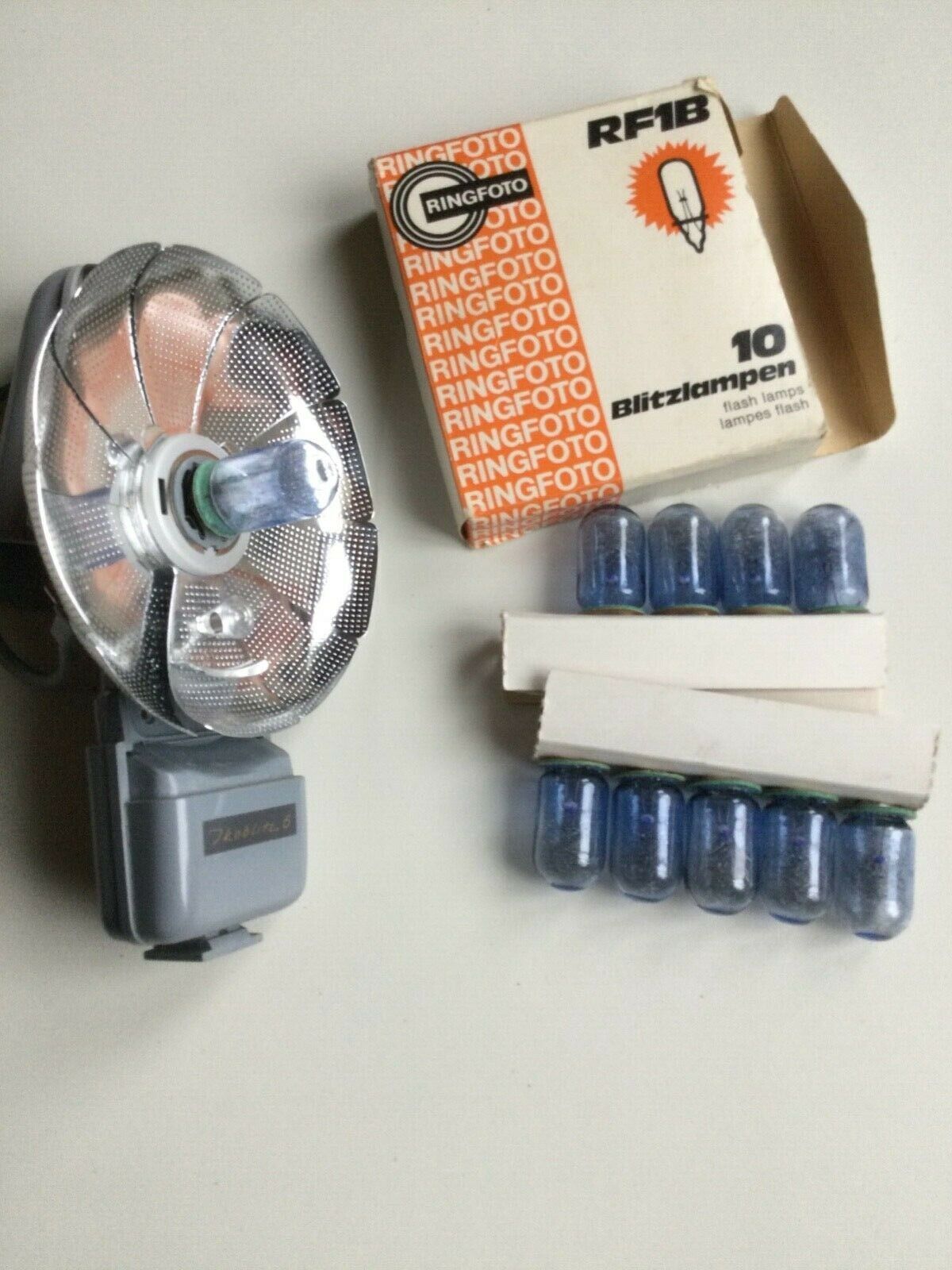 The basic reason you haven't found simple "plug and play" electronic bulbs that would work in a non-modified flash made for single use bulbs is that it's not really feasible.

For an electronic flash tube, much more voltage is required than what is provided to chemical flash bulbs. In order to use a reusable gas filled tube with vintage pieces designed to be used with disposable flash bulbs would require essentially building a modern flash's electronics inside the vintage housing.

If you take a look at the guide number diagram, you get a guide number of 20m at 25ASA which corresponds to a guide number of 40m at about ISO100, at very wide angle illumination. The reflector cannot really hold a candle to a more modern flash tube reflector. An equivalent electronic flash would have significant energy to dispose of: the Metz hammerhead flashes are specified as having 45m guide number at ISO100 for 35mm illumination angle (narrower than what you appear to have there). They store about 70J of energy if I remember correctly. A typical strong cattle fence has about 3J of energy and comparable voltage. There has been some stupid trend in Japan of children shocking others with parts from old flashes, actually causing some fatalities.

The combination of the metal reflector and the contacts in the sockets is not at all proof against touch. In a hammerhead flash, a significant part of the handle is filled with the flash capacitor. In a cobrahead flash, the tilt joint is typically filled with capacitor.

Getting a complete electronic flash with capacitor and charging circuitry in the place of the bulb while retaining a comparable power to the chemical flash bulbs would be infeasible. Putting the charging circuitry elsewhere and only placing the flash tube there would mean that lethal voltage would be running around open metal parts.

In short, bad idea. If you want a show prop, invest in the original bulbs. They are set off using voltage that is not dangerous to humans.

Not the answer you're looking for? Browse other questions tagged flash vintage zeiss or ask your own question.

2
My Flash doesn't Flash
6
In low light, does it make sense to use a normal house light bulb instead of a flash?
5
Is it possible to manually controll the flash while using the BULB manual exposure setting on a Canon XSi?
5
How long will the bulb last in the flash of a compact or DSLR?
0
Where can I get a replacement case for my Nikon SB400 flash?
7
Bare Bulb diffuser for travel?
3
Tiny flash for dslr without built in flash
7
Can I simulate bulb lighting electronically?
4
Is there a technical reason for modern on-camera flashes' flash duration?