Can a horse look purple (ish)?

It looks a bit Photoshoppy to me, but I am willing to give the OP the benefit of the doubt. According to the original post, (here) this horse is a some mutated roan. I would like to know if this horse color is actually possible, and if so, what genes are in action here, or if it is just really some crappy Photoshop. (Or if the owner accidentally washed it with dye, like this guy did.) 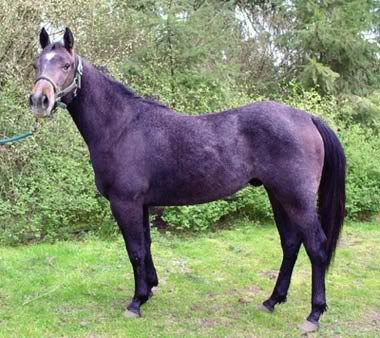 I think this is mainly an artefact of image processing, combined with the light in the photo.

This could be accidental or deliberate. A crude automatic white balance process could get confused by all the green and shift the colours away from it (i.e. towards purple), especially if the image is also being lightened. The post was old, so in-camera white balance is likely to have been crude. Alternatively the original picture could have been adjusted to match the photographer's perception. 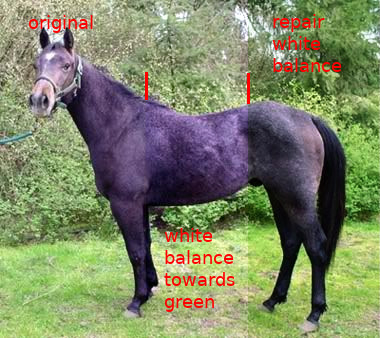 The lack of shadows and near-white sky where it shows through (blue pixel values reach 100%, red and green don't quite) suggest an overcast day, which enhances blues.

But note that roan horses with black hairs are known as blue roans, suggesting that they can look bluish in some lights

9
Why do my photos looked washed out when using my telephoto lens?
12
How do I get this "Washed out" effect for street photography?
7
How to lure an animal to look at the camera?
1
Can anyone reproduce the white/gold vs. blue/black dress's binary perception effect with a totally different subject?
7
Editing photos for this "milky" and "twinkly," vivid but nostalgic effect?
1
How can I fix this purple spot in my photo?
6
Working on improving my photography of blue water in the Caribbean
5
Why do colors in Photoshop look different from Lightroom?
3
What distinguishes natural photos from filtered ones (color theory)?