I have an IPS LED screen and I don't like its black because it is very dark. I know it's a bit strange (is it?) but I want the black to be more bright (that means grey) without white becoming darker. A dark blue would naturally become more bright then too and so on.

The contrast setting in the LED screen is already adjusted very low, so I think an ICC Profile would be good to make it better. It shall be an ICC Profile which is active the whole time in Windows which is strictly speaking called calibration file (ICM).

I can describe my desired transformation with 4 numbers and a principle but won't insist on it exactly:

so I think there should be a simple icc file or software to create it for my purpose? I have already digged in some icc files and saw some complicated color spaces which would be overwhelming to dig into for my purpose. 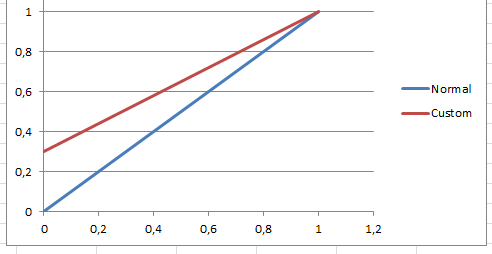 I have taken an ICC profile with some embedded vcgt calibration: http://fotovideotec.de/farbmanagement/downloads/testkalibrierung_blaeulich.icm. With https://github.com/KennethEvans/colormanagement I could reverse engineer pretty quickly this particular vcgt's function and hack a desired one into it with a hex editor.

Not the answer you're looking for? Browse other questions tagged color-management display-calibration icc-profile or ask your own question.

13
Do monitor calibration tools adjust screen brightness too?
4
What is the use of printer profiles when softproofing?
3
How to fix oversaturation on a color-calibrated monitor?
3
Create ICC profile - how many color samples?
4
Colour Workflow A - Z
1
Is a monitor ICC profile necessary for accurate color rendering by Lightroom, Photoshop, etc.?
4
Create ICC Profile for Negative film
1
Can I use “sRGB mode” or a manufacturer's ICC-profile as a poor substitute for hardware calibration?
1
Profiling a scanner: What does the Media White Point stand for in an ICC profile?