According to manufacturer specs 20mm lens has Field of View 94 degrees on FF (35mm) sensor and 70 degrees on APS-C sensor.

Another 35mm lens only has Field of View specified for FF (35mm) 63 degrees. Is there a formula to find what FOV this lens will have on APS-C (crop factor 1.5) sensor?

Another 35mm lens only has Field of View specified for FF (35mm) 63 degrees, can I mathematically find what FOV this lens will have on APS-C (crop factor 1.5) sensor?

Assuming the lens is rectilinear, which is a safe assumption for almost all lenses that aren't fisheye, then you can use the pinhole projection mapping function to calculate angle of view:

As Alan Marcus mentioned in his answer, the listed angle of view of most lenses is with respect to the camera's diagonal film/sensor plane. 35mm full-frame camera imaging planes are 36mm wide by 24mm tall, meaning the diagonal dimension is 43.3 mm.

Most non-Canon APS-C lenses are said to use a crop factor of roughly 1.5, meaning the sensor is 1.5 times smaller in height, width, and diagonal dimension than full-frame sensors. This is close, but in reality, general APS-C sensor heights are 15.6 mm high, meaning compared to full-frame's 24 mm sensor height, they are 24 / 15.6 = 1.54 times smaller. 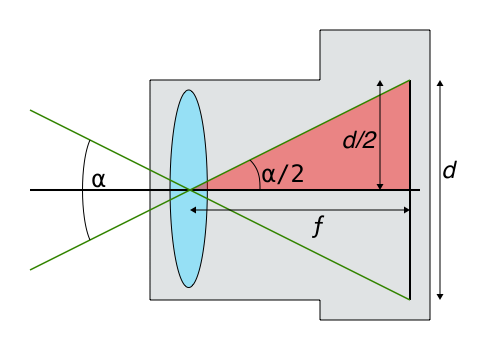 This camera diagram shows light entering a camera's lens from the left, into a lens of focal length ƒ and an ange of view ⍺, projected onto a sensor of size (dimension) d (it doesn't matter if the dimension is height, width, or diagonal; as long as you're consistent, the formula works for any of them).

The pinhole formula is just the solution of the red triangle with angle "⍺/2", with a cosine length of ƒ (the "run"), and a sine length of "d/2" (the "rise"). The tangent of the angle is just the sine divided by the cosine, the "rise over the run".

Double checking the math on the 20mm lens you cited:

These are very close to the specs listed. That verifies that the lens uses a pinhole projection mapping function.

Angle of view computing: If you have a scientific calculator that solves the trigonometry Arc Tan function Key label ATAN you can work out the angle of view.

Example: Find the angle of view of a FX (full frame)

Note: The diagonal angle of view is the one most frequently publish – like TV set are sold by their diagonal measure.

Using the same math for length

The value 63.4° is the diagonal angle of view and the one most often published. You can use this math to find the angle of view for any focal length lens mounted on any format.

All APS-C do not have the same crop factor.

If the crop factor in first example is the same as second you can calculate FOV on this way:

Not the answer you're looking for? Browse other questions tagged calculations field-of-view aps-c or ask your own question.

4
How do I calculate equivalent focal length from field of view?
3
Will there be any difference in photos taken using full frame and crop lenses on a crop camera?
6
Calculating the field of view for a Nexus 5
1
Which sensor "full frame" vs. APS-C (1.6 crop) gives more distortion?
1
How to calculate the Horizontal and Vertical FOV (in mm)
1
How do I select a fixed lens for my APS-C sensor camera for a specific field of view/zoom
1
APS-C + speedbooster vs full frame