Is the bokeh in this picture naturally occurring, or added in post-processing?

I feel like the blur is not natural. Looks like it was Gaussian Blurred with the couple as the center. What do you guys think?

The bokeh behind the couple looks normal, the sides seem to have had a gaussian blur applied to give a fake tilt shift effect.

The telling factor is the highlights. The light coming from the windows is much brighter and ought to have a sharp cutoff when rendered out of focus. Gaussian blur gives a soft edge to such highlights.

edit: reading the text of the image, the photographer states that this was created as a "bokeh panorama" (otherwise known as a panorama) hence the apparent shallow depth of field. This doesnt quite wash as there are elements of the background that are the same distance as the couple and hence ought to be in focus.

My guess is now that the photographer took a tele shot of the couple and a wide shot of the surround and blurred the latter to match, the blur in the corners just doesn't look like lens blur to me.

I don't think either field curvature or a T/S lens could reasonably account for what I'm seeing here. A T/S lens can change the orientation of the plane that's in focus, but you still get a plane. Field curvature can warp that so it's no longer planar, but it still defines a virtual "surface" that's focused.

If we look at the floor (for one example) a few feet to the left or right of the couple, there's simply no transition from out of focus to in-focus to back out of focus. Perhaps a comparison would be in order: 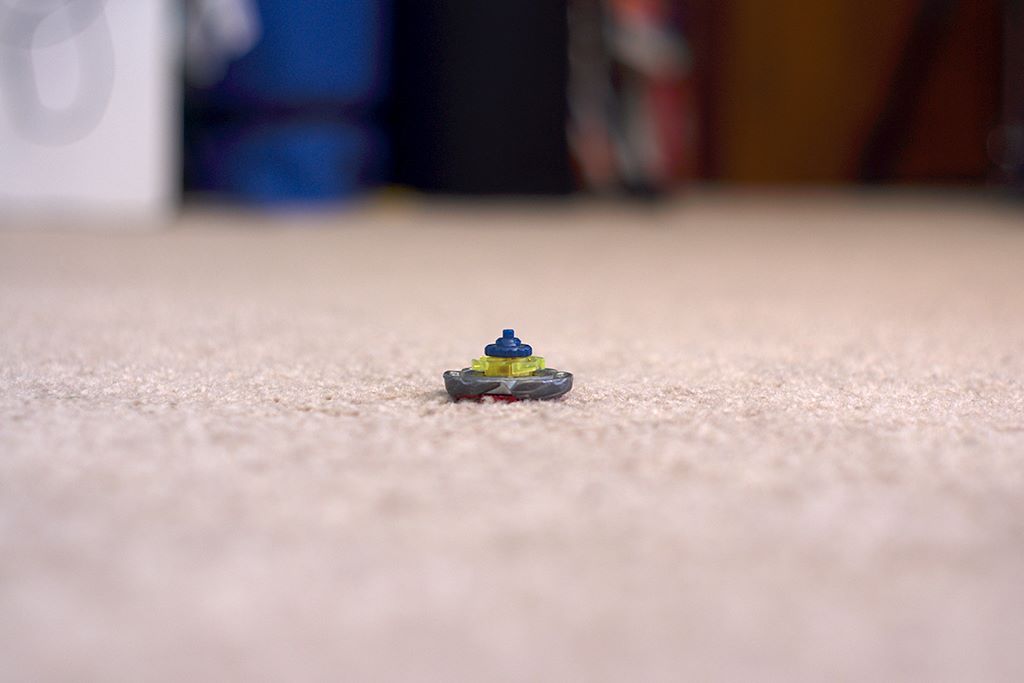 This shows a distinct line across the floor that's in focus. With field curvature, that line would be curved instead of straight. With a T/S lens, it could be an an angle instead of perpendicular to the camera. The subject picture has nothing of the sort -- no ling across the floor that comes into focus at all, straight or curved.

I suppose if you wanted to badly enough, a combination of extreme tilt with field curvature and focus stacking could almost produce this effect. You'd basically have to tilt the lens so much the focus plane would normally be almost parallel to the floor, but have a lens with lots of field curvature. You'd then do a stack, moving your focus from slightly above the floor up toward the head of the couple.

Offhand, the only lens I know of that would even be sort of close to producing that amount of field curvature would be the old, long-since discontinue Minolta VFC (variable field curvature) macro. With one of those on a T/S mount in front of something like a u4/3rds, I suppose you might be able to at least get sort of close. Even then, of course, Matt Grum's point about the windows would still stand though.

I think this was achieved with the "Brenizer method".

Essentially it is the same concept used by landscape photographers known as panorama stitching except instead of stitching a bunch of horizontal shots together to form a wide image, the images are horizontally and vertically stitched to create a wide and tall image not unlike a square. And because you are stitching together many files, you are creating a very high resolution image that can hold up to very large print sizes without loss in quality. By shooting at a very shallow depth-of-field (DOF) and then stitching the shots together, you’re exaggerating the shallow DOF.

You can always tell if blur was added in photoshop by trying to find the plane of focus. Look at the couple, everything in front of them and to the sides is OOF. To get that kind of effect w/o post processing you'd have to somehow throw the plane of focus in an extremely weird way. Optics don't work like that, even with a technical camera.

This could be achieved without "fake blur" by shooting a series of photos with focus point bracketing and combining them, picking chosen areas focused and chosen out of focus a'la hand-made HDR (except picking focus instead of contrast ).

Is this is the case here... doubtful.

Not the answer you're looking for? Browse other questions tagged post-processing bokeh blur or ask your own question.

36
What is "bokeh panorama" (also called the "Brenizer method")?

13
How do I achieve this post-process effect?
21
How can slightly blurred photos be improved in post processing?
5
How is the term Gaussian blur used?
1
In an out-of-focus photo, why do lights look different than normal/dark areas?
17
What is the cause of this non-uniform bokeh effect?
4
Synthetic bokeh: linearly intensify bokeh/blur from e.g. detected contrast or bokeh circle sizes
13
What algorithm can I use to simulate bokeh?
4
Donuts in the bokeh through the viewfinder of Canon 6D
1
What causes this 'bokeh crop' effect?