While scanning many 35 mm slides (mostly Kodachrome and its successors, i.e. Kodachrome II and 64), I noticed what appear to be pinholes in the emulsion, perhaps on the order of 10 or 100 microns. The defects are mostly from some slides, taken in the U.S. Southwest in the late 1980's, such as that below, cropped from a photo in Bryce Canyon National Park in Utah. Others, from other places, even taken on the same roll, do not have pinhole defects, or just one or two occasional defects on a slide. 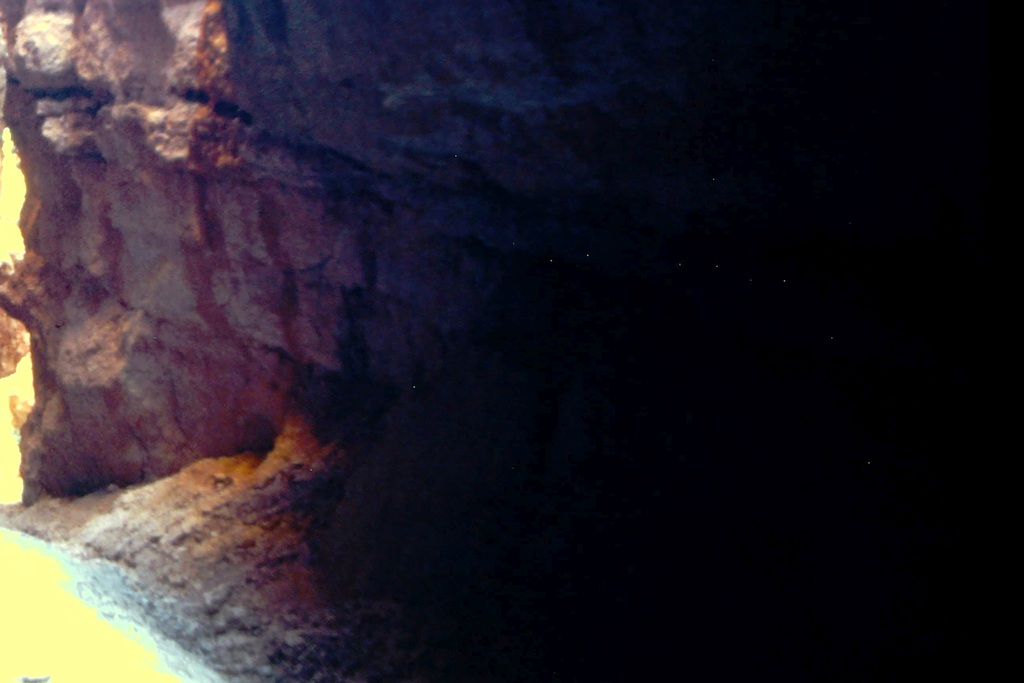 The defects are the tiny white dots visible against the dark background to the right.

Though I can think of alternative causes, such as electrostatic discharge (unlikely, as it was in summer, and there are no accompanying streaks) or scratches (however, they're points, not linear), I thought [the defects might be due to radiation from past nuclear weapons testing upwind from that area, either alpha particles, or judging by the comparatively size, even fission fragments. Contaminated dust certainly could have entered the camera while changing lenses or film. Plain dust itself is unlikely to have caused the issue, since Kodachrome is a reversal film, and that would have left dark spots.

Does anyone have insight into what may have caused the pinholes? Is nuclear radiation damage an actual likelihood, or is that farfetched?

The processed Kodachrome slide film consists of colored dye imbedded in purified gelatin. If you examine a slide via reflected light, looking at the emulsion side, you will see relief image. Meaning the slide is not uniformly flat, the gelatin had different thicknesses based on image content.

The gelatin of the emulsion is an attractive food for microscopic beasties. These arrive and land on the film as airborne spores. The gelatin emulsion is hydroscopic and quickly gains water from damp air. In other words, all the ingredients needed for besties is present.

Kodak applied a coat of lacquer to seal the emulsion, other photofinishers did this on a hit or miss basis. Additionally the film was treated with a biocide. Over time the biocide out-gasses. Sorry for your loss - my lab 3M Dynacolor applied the lacquer.

Not the answer you're looking for? Browse other questions tagged film 35mm slides or ask your own question.

12
Inexpensive method of digitizing large numbers of 35mm slides?
15
How to store and preserve film negatives and slides?
1
Concerns with glass slides vs glassless
10
How to Destroy Slides
2
What Is A Box That Allows Viewing Slides Using Both Eyes Called?
2
What aspect ratio are slides intended to be?
5
What is this white film on slides from late 1950s?
1
Mold Spread On Slides
2
Slides in the digital era
0
Weird blotches on old negatives and slides?