What legal restrictions to photography are there in European countries?

I'm from Ukraine, and I know where I can shoot here and when. I had few trips to USA where I know it's very difficult to shoot on the street, without encroaching on someone else's private life.

I plan a travel to some of the European countries soon, but I don't know what I can shoot, and what can I not?

I live in the Czech Republic, and travelled a little bit around neighouring countries. As for the legal situation, I know we have a freedom of panorama. Practically, I don't remember having any issues with protographing stuff around me, even though there are some private and publicly accessible spaces (like shopping centers), where photography is forbidden, in which case it's probably better not to fight local security when they want you to stop taking pictures.

As a tourist I've recently been to Austria, Germany, Italy, and the UK, and it was completely fine everywhere except for the UK, where some local security guard didn't like me taking the following photo of security-camera-loaded train station. (I didn't quite understand what he was exactly saying, but he let me be after I said sorry and put the camera away.) 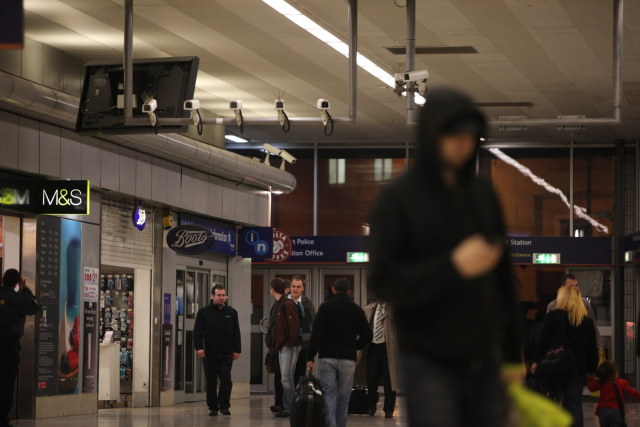 All laws will vary by jurisdiction, and you'd be best advised to speak to a qualified lawyer if you intend to sell or publish your pictures; but in general, if you're in a public place, then you can take a photo of whatever you like (as long as you're not breaking other laws, such as those dealing with public nudity). Be aware that some seemingly public places aren't, and they can place restrictions as they wish - for example, shopping centres are private property, and although they allow you to treat them as a public place, they often impose restrictions on photography.

Government guidance is often hard to come by, but various lawyers have published their interpretation of the laws for a particular territory; Personally, I carry several copies of the UK Photographers Rights information sheet.

Disclaimer: I am not a lawyer, so don't take this as legal advice

In Sweden, the rules are very simple: if you're on public property (i.e. the street, a park) you can take photos of anything that isn't considered a "secure compound" (these are clearly marked by signs). If you're on private property (this includes e.g. at least the indoors parts of train stations, shops, gardens, and so on) the owner has every right to ask you to stop taking photographs and asking you to leave. They do not have the right to have photos deleted, and they do not have the right to forcibly remove you from the premises. They may however call the police, and they are allowed to forcibly remove you (but as far as I know, not can't ask you to delete photos either).

Additionally, in Sweden we have the freedom to roam, giving a person the right to access, walk, cycle, ride, ski, and camp on any land, with the exception of private gardens, the immediate vicinity of a dwelling house and land under cultivation. Restrictions apply for nature reserves and other protected areas. As long as you don't climb any fences, you're fine.

in all countries I visit, I prefer following tactics "first ask, then shoot". Although I mostly prefer nature photography, which also has less restrictions :-D (did not encounter a deer complaining about taking a photo of him :-D ), on holiday I also shoot in cities etc.

For example, I was positively surprised, that in Moscow (Russia), where I expected more strict rules, after asking a security guard in GUM store (some my photos are here), he answered, that it is allowed to take photos there (while in similar stores in Czech Republic, taking photos is mostly prohibited). As I wanted to take a photo of one beautiful metro station in Moscow, I asked a nearby policeman. He said (with smile) something like "Ok, take quickly a photo and go.".

I also think, that it is a good idea to prevent taking photos of places with too many people in uniforms (like police stations etc.). But for example, as we visited Israel, things were quite different. Our colleagues asked some armed soldiers patrolling on a square, whether they can have a photo together with them - no problem! Taking photos in Jerusalem - streets, market places etc. also no problem (avoided obvious taking photos of particular people). The same in Bethlehem (same guidelines).

Here's the EUs laws website, Be my guest in finding the document. I've looked for a document to show police if i was ever unlawfully stopped for taking pictures, But there is just too many laws. If you can find it please tell me and I will print a copy, But what i do know is that everything @You said is exactly the same here in Ireland

Spain is one of the most restrictive countries in this matter in the world. Taking photographs is considered an invasion to privacy (in public places!!!) and it's needed permission, with only some exceptions: if you are taking photos of an event as a festival, monument, etc, or if the photographed people is a public figure. So the common street photography is not allowed.

Anyway I do it, but knowing that if someone requests that I delete their photos I should do it according to the law.

Not the answer you're looking for? Browse other questions tagged legal street-photography people photographers-rights europe or ask your own question.

16
What are good resources for Photographer's Rights around the world?
6
Is it legal to stop me from taking photos in temples in India?
3
What are the differences between photography laws in USA and France?
1
Right to use a photo taken at a Russian train station

3
What are the differences between photography laws in USA and France?
2
What legal issues are there with selling photographs of white river rafting companies?
4
What legal restrictions are there on the use of logos in photos?
5
What are the laws in Australia surrounding photography in public places?
3
What is the legal consensus on "pinning" photos using Pinterest?
2
What are my legal rights when shooting a public event?
4
Is photography banned at Birmingham New Street Station (UK)?