Convince Sony Cyber-shot DSC-H300 to take many pictures after one shutter press?

A friend of mine does cosplay and wants to be able to take pictures of her costumes. She's got a backdrop set up in her house, and is currently just using her smartphone but is not happy with the image quality. She had picked up a DSC-H300 (not HX300) but now we're thinking this through a little more.

What she would like to be able to do, is to activate the camera (whether by hitting the shutter release on the camera itself, or some kind of remote), get into position, and then have the camera take multiple shots (at least 5) a few seconds apart, giving her time to move to a different pose for each shot. Holding some kind of remote (especially a wired remote) is not an option as it would be visible in the shot.

I've seen the phrase "burst mode" bandied about, but it seems like that almost always applies to images taken as quickly as possible, and almost always while the shutter is being manually held down.

The H300 does something called "continuous shooting" which might do the trick, it's hard to tell from the description in the user manual: 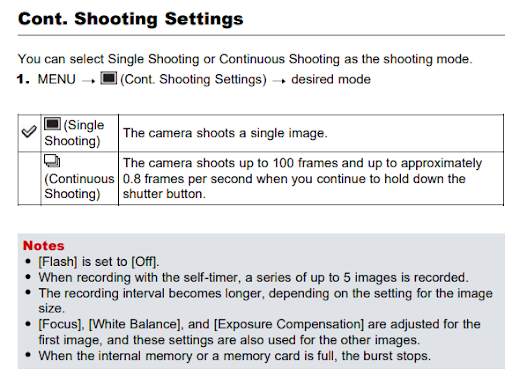 But maybe some combination of self-timer and continuous shooting will record 5 images at 0.8 images per second?

There is a comment on Amazon, supposed from Sony themselves, saying that the VPR1 doesn't work with the DSC-H300: 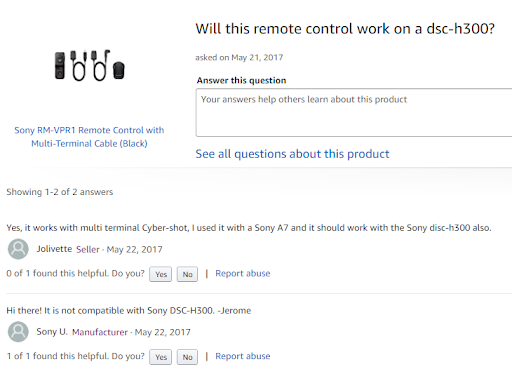 The manual page you refer to in your question indicates that when continuous shooting is enabled and...

... recording with the self-timer, a series of up to 5 images is recorded.

So using the timer with continuous shooting enabled should do what your friend desires.

Not the answer you're looking for? Browse other questions tagged sony burst-mode or ask your own question.

2
How to shoot B&W images in SONY Cyber Shot DSC-H70?
3
Can I connect a SONY NEX-5 to a computer to take pictures?
2
Is it possible to get a remote shutter release for my Sony DSC-W800?
0
What is the point of converter lens settings in a camera?
1
Sony Cyber-shot DSC RX100 - photo without memory card