I've been searching for some confirmation regarding the difference in DEFINITION of Focal length between:

Now I understand that a camera is actually a complex assembly of multiple lens elements and I believe this is where I'm getting mixed up.

Is it that since there are multiple lenses we really can't define it in a classical physics thin lens definition way since which lens element are we calculating the distance from?? Thus, instead we calculate from the final convergence point(since there can even be multiple convergence points along the way) to the sensor?? Would I be right in saying this??

In both physics and photography, the focal length of a converging lens is defined as the distance from the thin lens to the point were collimated light striking the lens will converge into focus. Collimated light is defined as rays that are all originating from the same point that is at infinity from the lens and arriving at the front of the lens parallel to each other.

If the point from which the light rays are originating is closer than infinity, then the rays from that point will not strike the lens parallel to one another. Such rays will also not converge into focus at the lens' focal length, which is always defined based on where collimated light from a point source at infinity converges. In such a case, the distance between the lens and the imaging plane (film/sensor) will need to be greater than the lens' focal length. The closer to the lens the object that we want to focus upon is, the longer the distance between the lens and the image/film/sensor plane needs to be.

When a lens with multiple elements is used, focal length is measured from the point a theoretical single thin lens would be located having the same refractive properties as the combined multiple elements have. This point can be either in front of the front element of the lens (i.e. a telephoto lens), behind the rear element of the lens (i.e. retrofocus lens), or anywhere between those two points.

There really is no difference between Physics and Photography. The distinction revolves around exactly what you are talking about.

The Focal Length of a Lens is the image formation distance or focal point distance (although it's not really a point) for an object at infinite distance. The infinite distance is another way of stating collimated light.

The Focal Length Used to take a picture will be longer than the lens infinity focal length when the object is closer.

In All Cases the film or sensor is at the Focal Length Used in order to form a sharp image on the sensor. Remember that although the line drawings give the impression of a dimensionless focal point, it's not a point it's an image.

This is my favorite diagram for showing this: 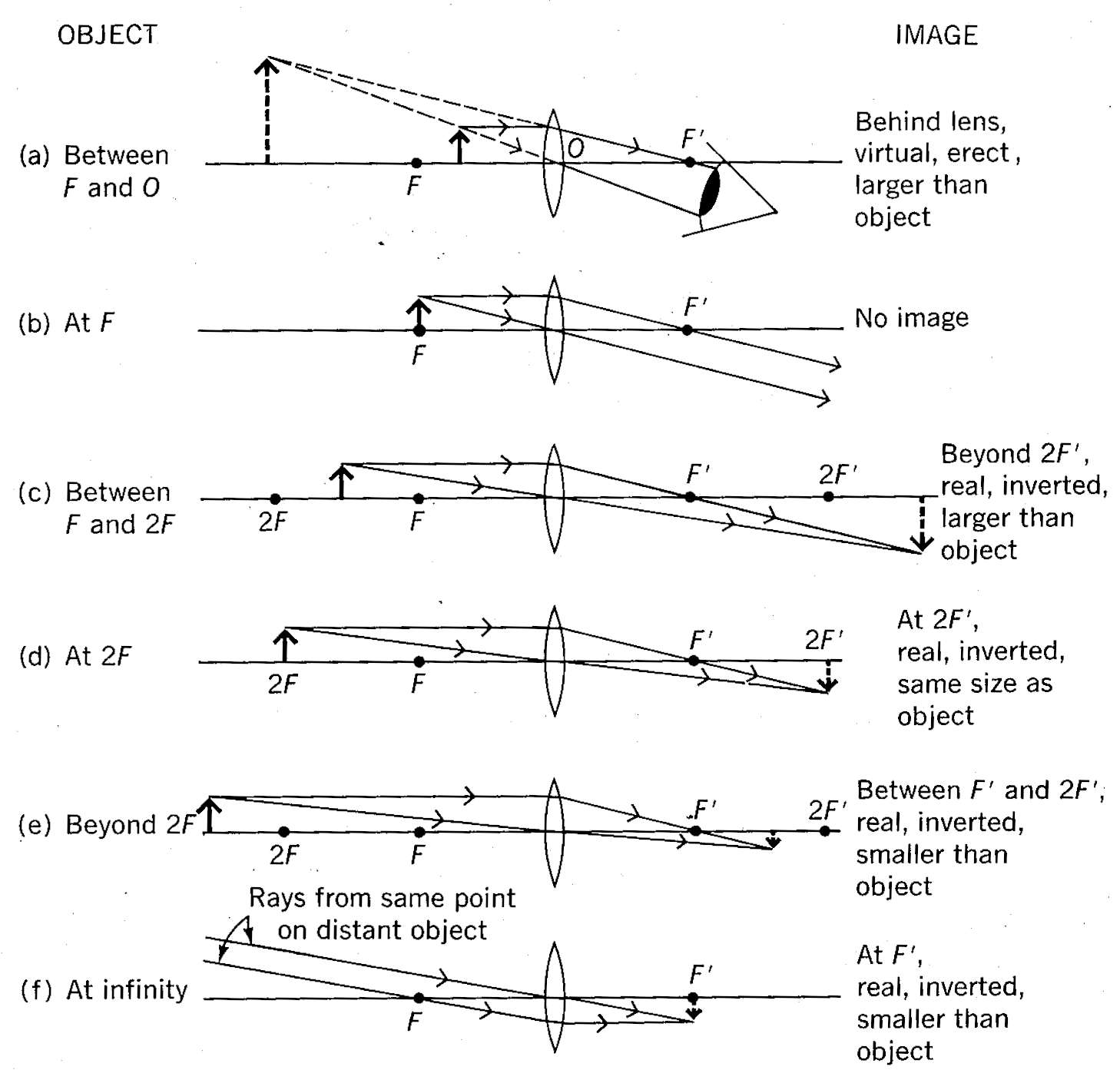 At (e) which is nearly all photography, the focal length to produce the image is longer than the Focal Length of the Lens. This also explains why there is a close focusing limit for a lens, you eventually can't get it far enough away to place the focus point (image) on the sensor. This is why extension tubes allow you to focus closer than the lens normally allows.

At (d) you enter the official definition of Macro Photography, an image as large as the object.

As you know, lens aberrations deface the camera image. To mitigate we must construct the lens using an array of several individual lens elements. Some of these elements will have positive power (convex figure). Some will have negative power (concave figure). Some will be air-spaced. Some will be cemented to its neighbor. Try as we might, residual aberration persists. Nevertheless the camera is capable to make spectacular images.

By definition, the focal length is that distance from lens to the focused image, when imaging a far distant object. In other words, an object at an infinite distance (infinity ∞). Because the lens has laminations as to how much refractive power it has, when an object is closer than ∞, we must elongate the distance, object to focused plane. We do this by mechanically moving the lens array. This elongated projection distance is called the “back focus”. Often this distance is incorrectly mentioned as “focal length”.

To find the actual focal length of a complex lens, we put it on an optical bench. We run a series of tests. We find two cardinal points. These are called the front and rear nodal points. The object distance is measured, object to front node. The focal length is focused image distance to the rear nodal. This test is preformed when imaging and object at ∞.

You need to know that the location of the front and rear nodal points can be manipulated by the lens maker. A true telephoto has a shorter barrel because the rear nodal is shifted forward. This makes a long focal length lens less awkward. A wide-angle has the rear nodal shifted to provide clearance for the reflex mirror and its movement. In some telephoto designs, the rear nodal can fall in the air, forward of the camera lens.

A tip of the hat to those who design our lenses.

87
What is "angle of view" in photography?
6
Is focal length measured relative to the sensor or the lens?

14
What is the reference point that the focal length of a lens is calculated from?
0
How does the focal length help in capturing wider or narrower picture?
2
Why are lenses characterized by focal length and not the effective field of view?
1
MFD equals 4x focal length? But published specs contradict that
4
Seeming contradiction on wikipedia about rear nodal points and how the principal plane is related to focal length
1
Focal length for a specific distance?