Why does stacking reduce star color?

I attempted to photograph the Big Dipper last summer. While I am very happy with the overall result, I recently found that the color of the stars has been greatly reduced during stacking. The following photos show about the same section of the sky. 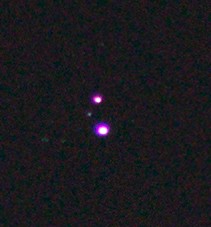 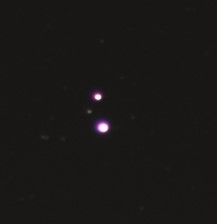 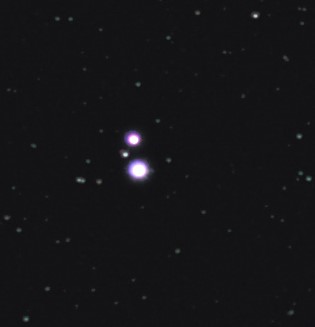 As you can see, the violet color of the two stars is greatly reduced and almost lost in the final image. For the difference between the latter two, this can be explained by an (apparently) too strong brighntess increase of the stars (I should have limited this to the fainter stars).

What could be the cause of the loss of color when stacking?

Some more information in respond to the comments: The two bright stars are Mizar and Alkor. Micar (the lower, larger star) is Spectral Type A1V, Alcor is A5V+M3-4V.

The violet-ish color is present on every light frame.

In some other answer in these parts it was pointed out that stars can also be small enough to fall onto a single sensel so they can be red, green, or blue (or missing one of the channels) depending on where they fall on the sensor. Stacking images would average their position and mitigate this, removing the color bias.

Suppose that Mizar had a colour value 20:5:20 so the red and the blue were stronger than the green giving you a violet star.

Now the stacking software is not this simple minded, but this illustrates the problem.

The image is more accurate, not less accurate. The star color is not str color at all. It is an aberration.

Not the answer you're looking for? Browse other questions tagged post-processing astrophotography or ask your own question.

1
Why does photographing the Milky Way require short exposure, when star trails need long exposure?
1
If i use ISO 1600 to photograph stars will image stacking help reduce noise but also add more detail?
3
Star photography: what aperture
2
Siril stacking algorithm
5
How can those star-trails be non-circular?
4
Why do some star trails appear blue?
8
Will stacking more images produce more detail in this galaxy photo?
1
Unsmooth Star Trails
4
How to reduce large, agressive color noise?