Does the film counter point to the number of photos taken so far, or after this current shot?

I know this is a dumb question, but I recently inherited my first film camera, a Rollei B35. After loading the film, I had to fire the shutter a couple times to get the film counter in the window to "1".

What wasn't clear to me at that point however, is whether the numeral 1 denotes that a capture has already been taken, or whether it is telling me that I am about to take the first photograph. 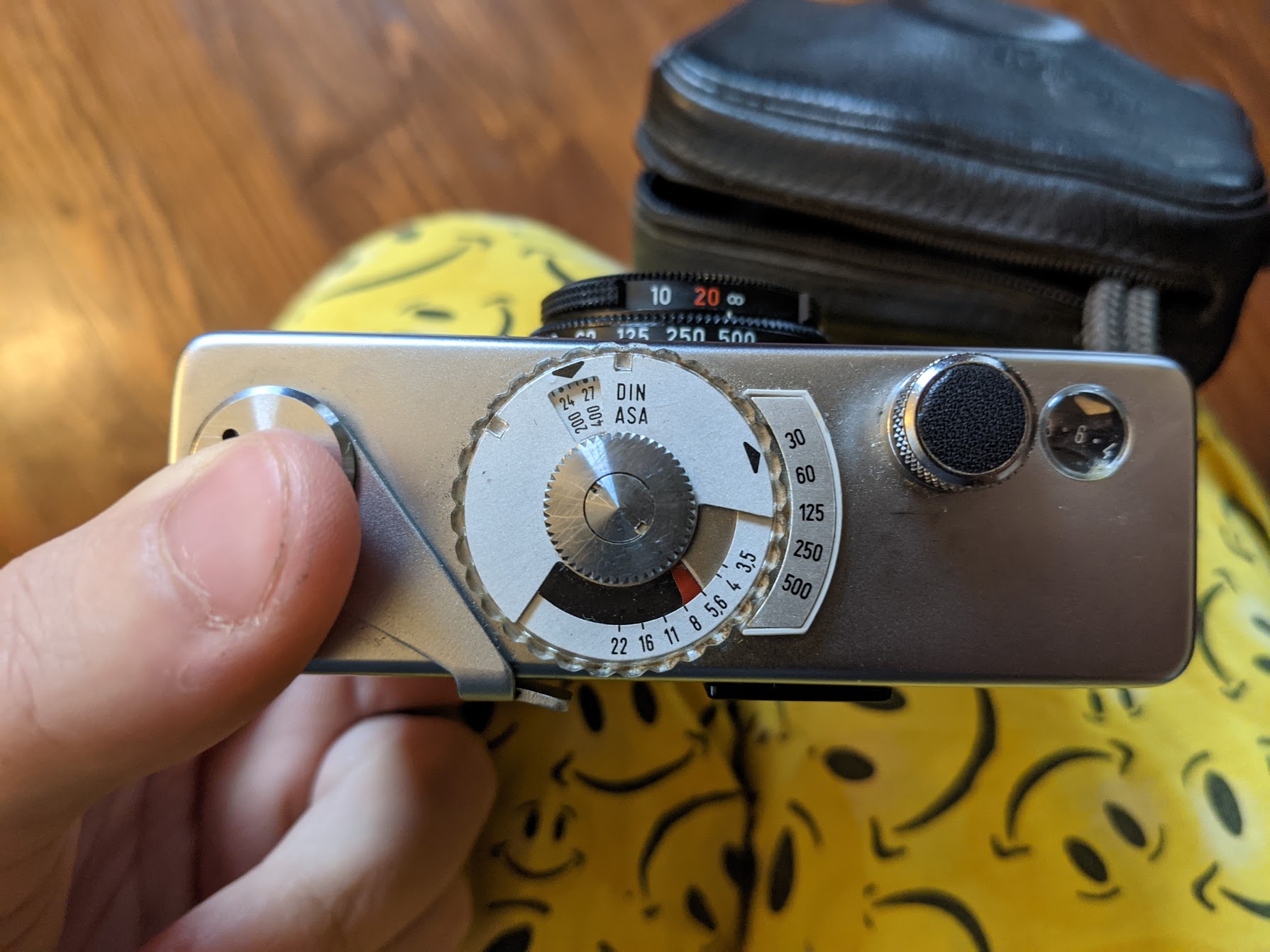 As you know, a short tapered tongue / leader -- length of film protrudes from the velvet lined mouth of the film cassette. The velvet is a light trap that protects the film in the interior of the cassette from being fogged during the film loading procedure. You would be wise to load and unload in subdued light. In desperation, use your body’s shadow.

We close the camera and advance the film to #1. This indicates that exposure number 1 has been advanced and the camera is ready to take picture no. 1.

We are all tempted to squeeze more shots out of our roll than the number of exposures stated on the box. With luck you can get two or even three more frames.

As a rule of thumb these extra frames should be considered hit-and-miss. In other words don’t deliberately compose and shoot the next Pulitzer Prize image on film that could be despoiled.

Here’s why! The tongue, along with a few subsequent frame lengths, is likely fogged. If you are developing the film yourself, standard practice should be to cut off the tongue and save it for testing fixer and perhaps developer activity.

If you send your film out for processing, the tongue and then some will be used to affix the film to the film transport mechanism of a film processor. This area likely will be used to identify your roll via an adhesive label, or have a number imaged using light or perhaps a number using a labeling punch.

OK to try and get a few more frames than stated on the box. Just be aware, that all of the extra fames might not be fruitful.

It's an entirely mechanical device with a manual wind. It will show the same number whether or not you took that frame yet. The mechanism should prevent you double-exposing (though some cameras have an intentional double exposure setting) but you'll only find that out normally when you try to press the shutter release.

That indicator on a film camera should be considered a rough guide, not an absolute. You can squeeze a couple of extra frames at the end, or try get a half frame gain at the start, so long as you don't want them to always come out. It's just an approximately-lengthed strip of film, it doesn't really have any frames at all until you expose them.

I don't think anyone has answered the actual question: in all mechanical cameras I've seen, and most electronic ones, the counter counts up, from 1 (or 0, on some cameras) at the beginning of the roll, and always shows the currently available frame after advancing, or the most recently exposed before. These frames are determined by the way the camera's counter is designed; some will let you set 1 after loading, so you can choose to advance twice or three times (risk a half-frame to get one more, or play it safe). A few will go well past 36, because even with commercial film you can only get 37, 38, even 39 frames on a 36 exposure roll, and with bulk loaded film you can often get 40 to 42 (that's about the limit that will fit in a developing tank).

I would say "neither"... As you noted, you could advance a couple times to even get to "1" - those could have been real frames that are now wasted. In addition, you may buy what is marketed as a 36-frame roll, but you can often get a couple extras out of it before you can't advance any farther. Both the frame counter and the nominal frame count on a roll of film are not exact - in the case of the film roll, it may actually be a guaranteed minimum, though; the frame counter can over time get out of alignment, as well as be a bit dependent on exactly how you load the film (how much you roll onto the take-up reel during loading). Use it more as an indication of when you need to have another roll with you ready to swap in than rather than a reliable indicator of how many shots you've taken.

whether the numeral 1 denotes that a capture has already been taken, or whether it is telling me that I am about to take the first photograph.

Either. Both. Take your pick!

It's a matter of personal preference whether you keep the camera cocked for the next shot or not. When I owned a film camera, my preference was to put it away without winding the film, so that there would be no chance of accidentally tripping the shutter. I would only wind it just before I wanted to shoot a picture.

Added info: I forgot* that your camera, the Rolei 35, is special: It won't let you collapse the lens if the shutter is not cocked. Since you probably won't want to store it with the lens extended, you probably will always wind it before you put it away.

* My Dad used to own one, but I only got to use it a few times, and that was at least forty years ago.

Not the answer you're looking for? Browse other questions tagged film film-cameras or ask your own question.

4
Is the space between frames on film standardised?

1
Rewind button stuck - is it essential?
2
New roll of film rewound into canister after 4 exposures
0
How far will my film counter read?
0
The film in my film camera won't rewind. 31 frame flashes intermittently
2
Need help identifying film type
2
How many frames have I lost due to opening my Canon Sure Shot 60?
0
Is My Entire Roll Ruined?