I though that when metering, cameras set the exposure so the average brightness in the scene is 18% gray or RGB(127,127,127). Then I read this article and am confused on this chart 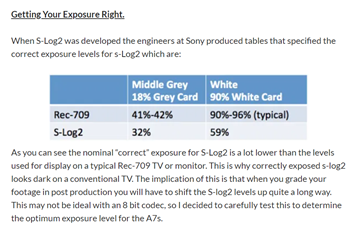 Any help would be appreciated.

To add to Michael's answer; Rec-709 and S-log2 are both gamma curves applied to the raw video data when a video is recorded. This is much the same as how a digital camera applies the 2.2 gamma curve when recording a jpeg, and Lightroom applying a 2.2 curve when displaying a raw file. Without a gamma curve applied, a raw image/file would not look the way a human sees the scene.

The Rec-709 attempts to make the video look as it does to a human, so mid gray is output at mid levels and white is near clipping. But this can cause clipping of even brighter and darker light levels in the video; much the same as when recording a jpeg.

S-log2 attempts to expand the recorded DR by applying a much flatter curve and all brighter values are reduced. Whites are not output as white and even brighter values which would have clipped are retained. But this video then requires additional post production work in order to make the footage look correct. I.e. S-log2 is not output "correctly;" it is underexposed and has less contrast in order to give you more flexibility in post production. This is similar to setting all of the digital camera's picture control settings to minimum/flat with a negative exposure compensation when recording jpegs.

It's the difference between the linear response of the digital sensor and the logarithmic response of human vision, which is taken into account by display devices such as monitors.

An 18% grey card "properly" exposed is only RGB (127,127,127) after full gamma correction has been applied to the raw data. When using "log" recording, gamma correction is reduced, thus it does not apply as steep a curve, and applying the rest is delayed until post production. In the "log" file (whether Sony, Canon, or Panasonic, etc. - they all do it similarly) a lower gamma value has been used and the recorded values aren't raised as much as they would be with an application of "full" gamma correction. It's up to the post processor to decide how to shape the final gamma curve as well as the "s-curve" at each end.

Note: When viewing a true "raw" still image file on a monitor, you're not actually viewing "THE raw file." You're looking at one of among near countless legitimate possible interpretations of the raw data with demosaicing, gamma correction, etc. applied to that data.

Not the answer you're looking for? Browse other questions tagged exposure metering exposure-compensation or ask your own question.

11
Why can software correct white balance more accurately for RAW files than it can with JPEGs?

19
What is the difference between luminance and illuminance?
16
What's a good ad-hoc replacement for a gray card?
6
How do I get a meter reading for a DSLR without a gray card?
3
How critical is it to expose raw images correctly?
10
How can I expose a waterfall scene correctly?
3
Why are gray cards, and not red or other colour, used for camera metering?
6
How many stops are there between middle gray and white point?
2
How much exposure (in lux second) required for camera to yield middle gray image?
4
With the same camera settings, will a photo always be exposed correctly across different cameras?
2
Gray values on QP card 201