Hydrogen Alpha Filters (Buying The Right One and How It's Used)

I am looking to purchase my first hydrogen-alpha filter to use for day solar (Sun) photography as I just recently purchased a SkyGuider Pro device. However, upon several bouts of research I am at a loss as to what exactly I am looking for and consequently, how to use what I am looking for. Here is my confusion:

If it helps, the equipment I plan on using is:

I already have a range of solar filters for my various lenses. The left-half of the image below is what I strive to achieve if possible.

Can someone please point me to a guide or in the right direction so that I purchase the right thing as long as it is not cost-prohibitive? 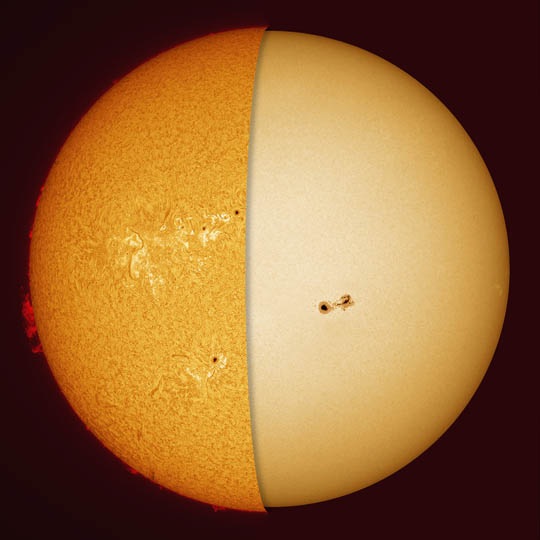 While Hydrogen alpha (Ha) solar telescopes such as those from Lunt Solar Systems or the Meade Coronado line do filter out all wavelengths except Ha, they also have a substantial energy rejection filter because the Sun's energy is overwhelming.

The Ha filters for astronomy (just a filter ... no energy rejection) are not meant for use looking at the Sun. Those are narrowband filters designed to enhance imaging of Ha objects such as emission nebula that glow in Ha (such as the Horsehead nebula, Lagoon nebula, Rosette nebula) and can also be used when imaging galaxies to bring out the nebulae within distant galaxies. These filters are meant for imaging deep-sky objects at night. DO NOT use these filters for viewing the Sun.

Daystar Filters not only makes Ha telescopes, they also make gear to fit onto telescopes to make them suitable for Ha work ... including a product they call the Quark.

In particular, they make something called the Daystar Camera Quark. This fits between the lens and body to allow only Ha wavelengths to pass (and correct for the back-focus distance change).

Most high quality Ha solar images are actually a composite image ... one of the chromosphere, the other of the prominences, and they are overlaid. My Ha Solar telescope (a Lunt) has two tuning "etalons". When both are installed I can tune them for great surface detail. But to shoot the proms, I remove one etalon (and replace it with a spacer) and shoot the prominence data ... then merge the two sets of images.

If you want to imaging using your camera and lens, then use the Daystar Camera Quark. However ... I first attempted to imaging using my Canon 60Da through the Lunt and found the images taken with the DSLR were not great. Much of this has to do with "seeing" issues (atmosphere instability). To image the Sun, you'd normally collect some video frames (say... 30-60 seconds worth) and then run that through stacking software. It turns out having non-lossy video frames and a high frame rate really improve the results ... but DSLRs aren't great at either of these.

I was personally frustrated with the results and approached other astrophotographers who do Ha solar imaging ... and they put me on the path to using a dedicated solar imaging camera. The favorite camera for Ha solar work changes every few years, but it tends to be a camera with a small imaging chip, monochrome (not color ... you're only capturing one wavelength so a color camera with a Bayer matrix means you are wasting 75% of your pixels), and the ability to capture uncompressed (non-lossy) frames at high speed (typically the camera would have a global shutter instead of the more traditional rolling shutter).

Ultimately I switched to a ZWO ASI174MM camera. This camera is optimized for Solar and Lunar imaging because it has a "global" shutter. Most digital cameras use a "rolling" shutter. The camera doesn't actually image the entire frame at the same time... it scans row by row. A "global" shutter scans and reads out the entire frame at the same time. It is significantly faster (and also a more expensive design). But with the global shutter, that camera can shoot at 164 frames per second at full resolution (but it is a small chip). (I should note that the camera has no on-board storage ... so it's critical that it be connected to a fast computer via USB 3 and the computer typically needs extremely fast storage (it will collect several gigabytes of data in just a few seconds ... if the computer isn't fast enough it will have nowhere to put the data and the frame rate will drop.)

The camera is used in conjunction with a dedicated Ha Solar Telescope. In my case, it's a Lunt 80mm telescope with two tuning etalons (often referred to as a "dual stack" because the etalons are stacked one after the other). The "etalon" is responsible for tuning the specific wavelength of light that can pass through the optical system (and they are very expensive).

Since I can remove one of the etalons (and insert a spacer) it means the scope can act as both a "prominence" and "chromosphere" scope.

The versatility of the scope combined with a high-speed monochrome camera really improved the results.

For eclipse photography, please visit Fred Espinak's website: http://mreclipse.com/ Fred is a retired NASA physicist who did (actually still does ... even though retired) the eclipse predictions. Both the path data for the 2017 and the 2024 eclipses are all his work. But he's also possibly the world's foremost expert in eclipse photography and his website is a wealth of information.

During a total solar eclipse, there's a few moments both before and after totality when the Sun is nearly completely eclipse and you can just see the chromosphere. Here's a link to one of my photos from 2017 ... this was taken without any filter at all (and this is really the only time you can capture a glimpse of the chromosphere without any filter at all on the camera).

Here's an example I shot during the 2017 Total Solar Eclipse: 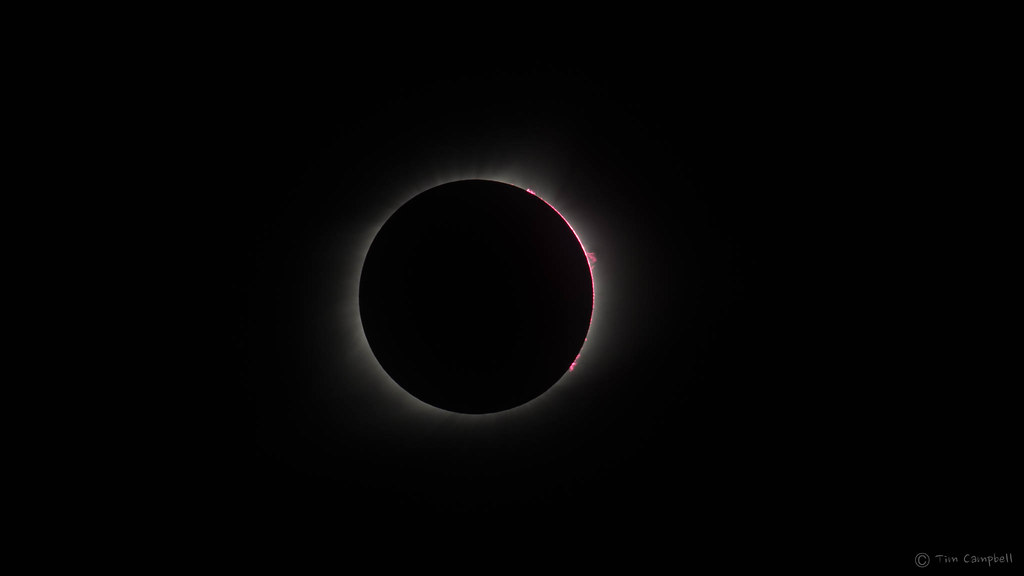 Note, no filters (Ha or otherwise) were needed to capture this. But it is only briefly visible in the moments before and after totality.

The get the timings right, I used special software.

Not the answer you're looking for? Browse other questions tagged filters astrophotography sun or ask your own question.

11
What filters are commonly used in photographing the moon with a DSLR at night without a telescope?
25
How do I find the right size of filters for a lens?
9
How would one use filters with the “bulb”-like shape front element lenses?
4
What are the benefits of a multi-coated CP filter over a regular CP filter?
1
Homogeneity of a filter, when does it matter?
0
Telescope Solar Filters to fit Canon Lenses
11
Front element shattered, can I have my lens repaired?
0
When stacking filters, how much larger than the lens thread diameter should they be to avoid vignetting?
0
What coating do old non-HMC Hoya filters have?
5
What is a good general filter to use on a flash to compensate for fluorescent lighting?