Blur effect or out of focus?

I discovered Robbie Lawrence's work while reading an article about his first body of work called Freetown.

I am really interested in the photos that seem to be out of focus but still a bit "sharp".

Any ideas on how he creates this effect? (I do some volunteering work in my neighborhood and it could be something useful for me). 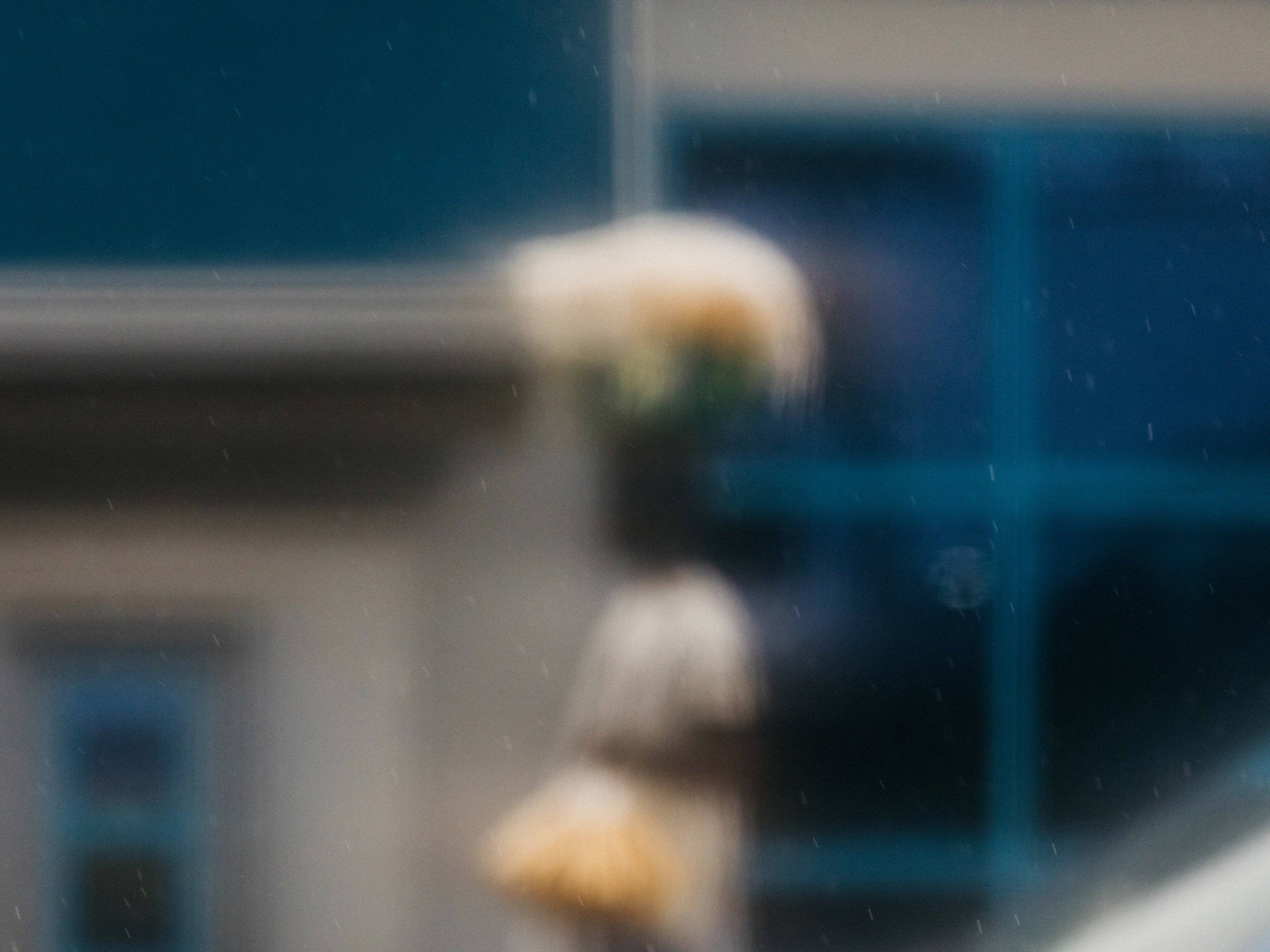 The most in-focus things in the photo are the raindrops or snow (it's hard to tell the difference from a single still image, but the varying vectors of their trajectories indicate either snow or rain in a swirling wind) that are falling much closer to the camera than the static items in the scene. They're blurred due to their motion over the duration of the exposure.

From this we can deduce two things:

Another clue we can use is the observation of how the most out-of-focus parts of the image in the background look. The blur is what some call "busy". Rather than being softly dispersed, the light from the most out of focus objects creates several "bands" or "shells" of decreasing brightness as they move away from the center of the blur.

This is usually a result of using a lens that is highly corrected for field curvature. Such lens designs place a higher priority on edge-to-edge sharpness of a flat two-dimensional target than they do on the smoothness of out of focus areas.

Combine both of those observations and we can guess that the photographer may have been using a "macro" lens designed to be optimized for closest focus and flat field correction. If not a macro lens, at the very least it is a lens that was designed to do better at flat field reproduction than at smoothly depicting a three dimensional scene. Many recently introduced lenses are designed in this way because it seems how a lens scores reproducing flat test charts at relatively close distances is the primary factor in driving sales. (Just look at the out of focus highlights using one of Sigma's ART prime lenses. They may be "tack sharp" reproducing a flat test chart or a two-dimensional document or work of art, but they're not so great at smoothing the out of focus areas of a three dimensional scene. Lenses that don't correct as much, if at all, for field curvature do much better creating smooth out of focus areas, but they do so at the expense of 'sharpness' at the edge of a 2-D target when the lens is focused on the center of the chart.)

The bright straight lines of the window facings and/or door frames at the rear of the scene set against the darker walls and window panes, combined with the "busy" rendering of out-of-focus areas by the lens, give them a more defined shape than the object in the center of the frame that is between the camera and the far background. The nearer object's irregular shape and lower contrast between the bright and dark areas of the object, as well the nearer object's lack of contrasting colors, leaves the secondary blur created by the lens much less defined.

So to create similar images, one could:

6
Is there a theory behind 'Blur Detection'?
7
How was this blurry background, sharp motorbike effect achieved?
3
All my photos were blurry
8
Can the soft focus effect be created by slightly throwing the image out of focus?
2
How to achieve this smudge effect in photoshop?
2
Blur each pixel independently on sensor to reduce moire effect
7
How to get soft-blur effect on flowing water with iPhone?
0
Is this blur normal?