I was wondering about the use of lenses designed for smaller sensors on full frame bodies. This originally comes up regarding a discussion of Canon EF-S lenses with adapters on full frame Mirrorless bodies with RF mounts and the adapter. Since the adapter moves the lenses further from the sensor, I’d imagine that the coverage of the lens would be larger, and that the adapter or body alters focus to compensate. Is this thinking correct?

For example the EOS R5 has an adapter that allows for EF-S lenses to be mounted and still be able to focus to infinity, but I’m not sure if the image circle will only partially cover the sensor. I guess it depends upon the specific lens, but does anyone know of a list of EF-S lenses that provide full sensor coverage?

The EF-S to RF adapter is only possible because of the very short Flange focal distance of 20mm of the RF mount compared to the 44mm of the EF and EF-S mounts.

The adapter places the EF-S mount lens at it’s native 44mm distance from the sensor, so the image is no larger, and there will still be severe vignetting with most crop lenses.

Canon RF mount cameras will automatically crop the image from a Canon EF-S lens, while Third party lenses do not.

When using a third party APS-S lens like Sigma, Tamron, or Tokina, it is possible to select a 1.6x manual crop mode with RF cameras.

With EF-S lenses, [1.6x (crop)] is set automatically, and no other option is available. 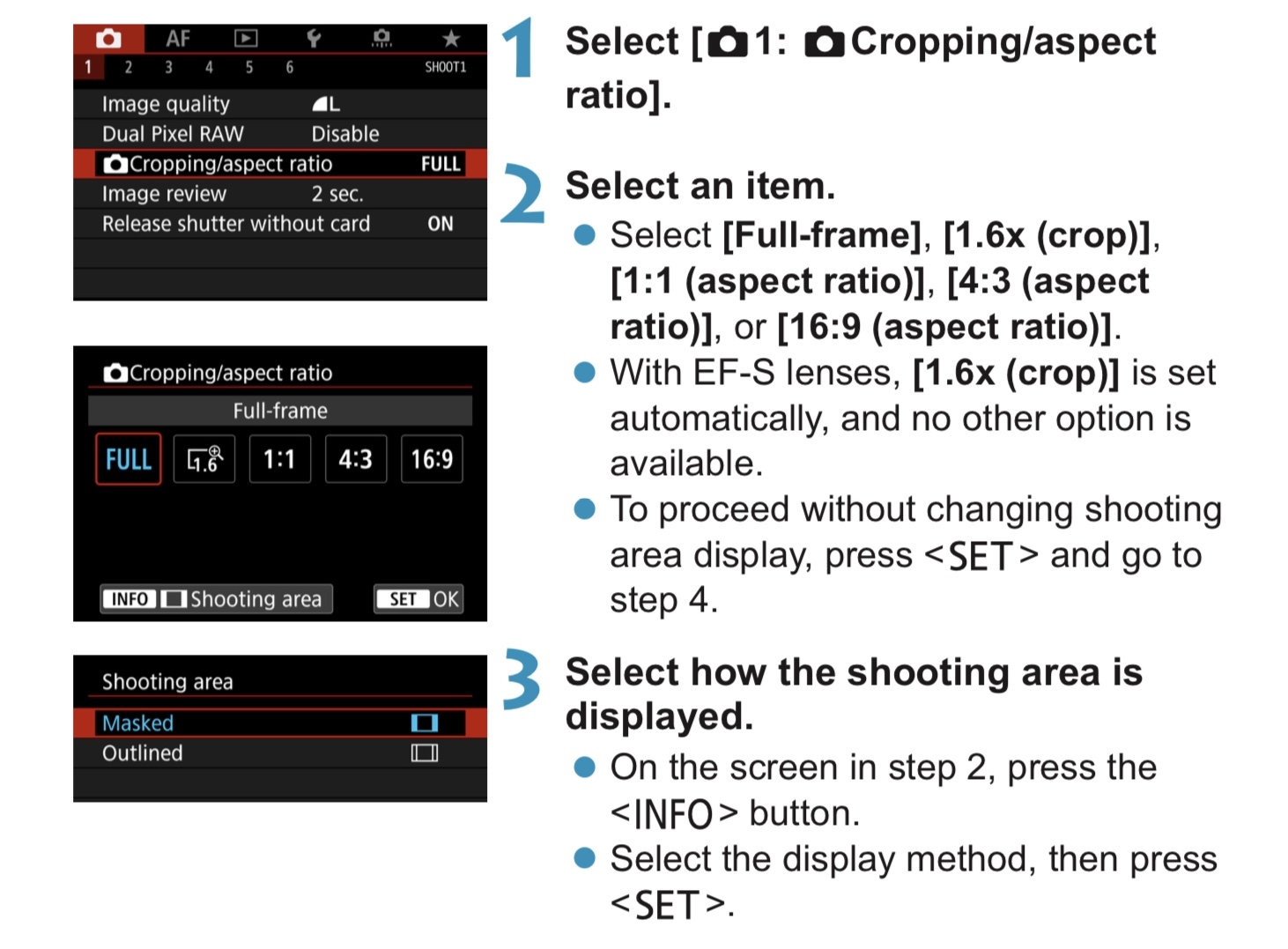 Since the adapter moves the lenses further from the sensor, I’d imagine that the coverage of the lens would be larger, and that the adapter or body alters focus to compensate. Is this thinking correct?

The adapter moves the lens away from the camera so that the lens is the same distance away from the sensor as it would be when mounted on a camera for which it is designed. The image circle at the sensor is the same size whether an EF-S lens is used with an APS-C EF mount camera or with an RF mount camera + EF→RF adapter. The EF-S lens will always converge focused light 44mm behind the flange ring.

Your intuition is partly correct, though, in a reverse sort of way. If it were possible to mount the EF-S lens closer than 44mm from the sensor of an RF mount camera, the image circle would be smaller than it would be at 44mm behind the lens' flange ring. Of course, in such a case if the lens were focused at infinity the sensor would be too close to the lens and the entire image would be too blurry.

To increase the image circle of an EF-S lens larger than the size it is projected onto the sensor of an EF mount camera, the lens would either need to be moved even further forward than the 24mm the EF→RF adapter provides or magnifying optical elements would need to be placed between the lens and the EF→RF adapter. It would be exactly the same as using extension rings or a teleconverter/extender on an EF mount camera, except the extension rings or teleconverter/extender would need to be placed in front of the EF→RF adapter when using an EF-S lens on an RF camera.

I guess it depends upon the specific lens, but does anyone know of a list of EF-S lenses that provide full sensor coverage?

With some zoom lenses the projected image circle enlarges as the lens is zoomed to longer focal lengths. If one uses such an APS-C only zoom lens on a full frame (FF) camera, at the longer focal lengths the image circle might expand enough to fill the FF sensor. There would be no guarantees about how the image quality in the areas that would be larger than an APS-C sensor would hold up as the lens is zoomed, though, since the lens as designed was not intended to use those portions of the enlarged image circle in images created using an APS-C camera.

Though not an APS-C lens, the Canon EF 8-15mm f/4 L Fisheye is a lens that has an expanding image circle as it is zoomed. We'll use it as an illustration.

Based on the way the image circle of the EF 8-15mm f/4 L Fisheye works out, one might be able to predict that an EF-S lens without a baffle at the rear (which would crop the expanding part of the image circle by blocking that light from passing through the back of the lens) would need to be zoomed to about 1.5X the lens' focal length at its widest angle of view. An 18-55mm lens, for example, may need to be zoomed to about 27mm or longer to expand the image circle enough to cover the FF sensor. Lenses that use a rectilinear, rather than fisheye, projection may or may not follow the same ratio, though.

Any EF-S lens that zooms in this way might be used with a FF camera when zoomed to the longer part of its range of focal lengths. That's assuming that the camera would allow one to use the camera in FF instead of "crop" mode when an EF-S lens is attached to the EF→RF adapter. When an EF-S lens is adapted to an RF camera, the camera automatically crops the image to APS-C size dimensions in the center of the sensor. I'm not sure if any of the RF mount cameras have a menu item that would allow the user to override that. The menu item that allows for cropping third party APS-C only EF mount lenses¹ may or may not allow for telling the camera to use a Canon EF-S lens in FF mode.

¹ Every third party EF mount APS-C only lens I've seen has a standard EF mount, rather than including the extra tab used on Canon EF-S lenses that prevent them from being mounted to Canon FF cameras. The third party APS-C lenses will mount on FF Canon EF cameras, but of course the image circle will not be large enough to cover the full 36mmx24mm sensor. Apparently there is no electronic communication from the third party lens informing the camera that it has a smaller than FF sized image circle.

Not the answer you're looking for? Browse other questions tagged lens canon lens-mount full-frame aps-c or ask your own question.

29
Can I use lens brand X on interchangeable lens camera brand Y?
4
Can you use a EF-S lens on a full frame camera with an extension tube?

36
Do good lenses really last a lifetime?
4
Is there a comprehensive list of available (possible) adapters between different lens mounts?
7
Where does the price premium of full-frame come from?
2
Will a macro extension tube eliminate the cropping of an APS-C lens on a full-frame sensor?
1
Can I use Canon EF-S lens designed for crop sensor with a full-frame Sony E mount camera?
4
Does a full frame with a teleconverter perform better than an APS-C without a teleconverter?
0
Is the new Sigma MC-11 Converter just another alternative to adapters such as metabones?
24
Why did they ever make smaller than full-frame sensors?
1
Using old FD lenses - are they better for EF mount or Micro 4/3s system?